Membership of the Order has grown steadily – there are now over 1200 members with 30 seed-groups or groves. This has meant we have been strained a little at the office to cope….answering the 7,000 letters we receive a year does mean some delay in replying unfortunately, but your interests are always our concern 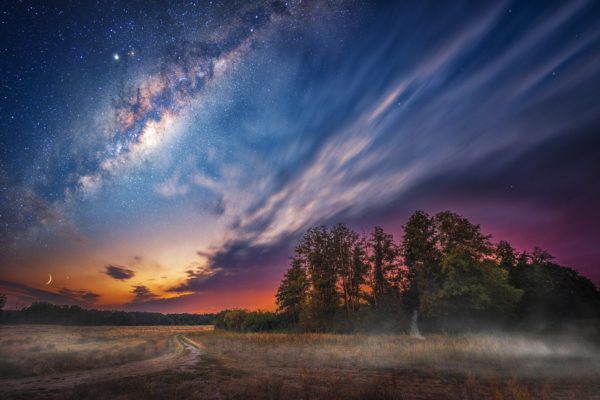 In this Newsletter that marks the beginning of the New Year, I thought it might be a good idea to write an annual review – to share with you some of the exciting things that have been happening for us here at the office over the last twelve months.

As the computer screen dissolves in front of me, I am back in our kitchen at this time last year. Too wild and windy to go out, we had transformed the room with pumpkin faces and many candles. That Samhuinn marked the end of a very difficult but creative year and heralded a year that has been extraordinarily busy and has seen Druidry become more and more accepted by the mainstream of British society.

After Samhuinn, London’s magazine Time Out issued a guide to religions, and Druidry was featured on a par with Buddhism, Islam and Christianity. Whether Druidry is a religion is a big question….. but aside from this, it is unusual for Druidry to be featured alongside such established and major world religions.

Through the winter we worked on building up the Montessori school we had opened in the Autumn here in Lewes. This really began as an in-house OBOD workers’ nursery. Harriet, Annie and Stephanie were all working with their small children in tow, taking it in turns to child-mind. I had trained in Montessori education and had dreamt for a long while of starting a nursery school. Finally, with wonderful support from OBOD’s patroness, we started with the ‘staff’s children’ as the seed-group of a class which has now grown to about twelve children aged between 2 and 5 yrs. The school now operates fully within the local community and is open to all children. We have a Steiner-interested teacher from Brighton, a Montessori trained teacher from the USA plus Anna and I from Lewes. I find that working with small children is like working out in Nature – somehow it makes you feel real, young, healthy, joyful and balanced.

After the inward-turning time of mid-winter, Imbolc marked a real opening up. Stephanie and I, together with Bill Worthington, the Order’s Pendragon, were asked to produce a book and card set on the theme of the sacred animals of Druid tradition, and we have been working on this project from Imbolc onwards. Called ‘The Druid Animal Oracle – Working with the Sacred Animals of the Druid Tradition’ it will be published by Simon & Schuster in Autumn ’94. Bill is painting 33 beautiful representations of each of the animals featured in the book, which Stephanie & I are writing together. There is so much traditional animal lore it has been fascinating to work on this project.

In February Dutch member and director of the Dutch Institute for Shamanism & Ritual Daan van Kampenhout came and stayed with us and gave a workshop in Lewes on shamanism. I found it a profound experience, and Daan returned just a few weeks ago to give a workshop on his newly developed technique for shamanically journeying inside the crop-circle pictograms! Back in February, Daan and I met up with Brian Bates, author of ‘The Way of Wyrd’, and psychology professor at nearby Sussex Universiy. One day I hope they will both address an OBOD conference. Bates’ speciality is Anglo-Saxon shamanism, and the interface between this and Druidry opens up an intriguining area of study.

In the Spring we held the OBOD annual retreat, and for a change we met in Devon rather than Iona. I have given up all attempts to describe or explain what happens at these events – they are simply magical and extraordinary – which is I guess why members come from as far away as Hawaii, Australia and America to join them. Out of this retreat was born the OBOD Astrology group – made up of members from Poland, America, Britain and Holland. They acted out an astro-drama of OBOD’s chart on the last evening of the Retreat, which was extraordinary.

Midsummer always seems to be a time of frantic activity on the outward plane: The Council of British Druid Orders (of which OBOD is a member) hosted the solstice ceremony on Primrose Hill and The Druid Clan of Dana hosted a Convention in South London, well attended by OBOD members. ‘The Druid Way’ was published and we had a great book launch party at a bookshop in Lewes. I underwent the initiatory ordeal of being interviewed on Sky TV news about Druidry and the book. Rather like going to the dentist, the anxious anticipation may last days, but the actual ordeal is mercifully over in a few minutes. Luckily no-one in Britain watches SKY News, so I got away without being spotted by members or friends. No such luck befell me when I did a ‘people report’ for the Big Breakfast show on Channel 4 about the Long Man of Wilmington. Now I know that all sorts of people watch the Big Breakfast (including OBOD members who should be deep in meditation or boiled eggs at that time of the morning). Within three months ‘The Druid Way’ had sold out, and the publisher decided to include a full-colour reproduction of the map in the new printing.

For the week or so after the Summer Solstice there was a flurry of radio interviews and newspaper reports, but they died down again, thank goodness. Journalists invariably need to write their reports for 5pm that night – so what on earth do you tell them about Druidry in twenty minutres on the phone that they will retain and not distort? An exception was the Independent’s reporter Chris Salewicz who produced a well-written piece for the Independent that generated a number of interesting letters in response.

We celebrated the solstice with the Hampshire seed-group in a member’s wood. Although the day had been rainy, the night was dry and we feasted around a bonfire before beginning the ceremony at midnight and staying on until dawn.

Walter, a dutch member of long standing who had murmured about coming to live in England for years, finally carried out his threat – to our great delight. He joined us at Alban Heruin playing the bodhran and didgeridoo and now divides his time between London and Lewes where he edits the Newsletter and helps print the Gwersu.

At Lughnasadh Stephanie and I were asked to officiate at two weddings – one for Paul and Sarah in a local grove in Sussex, and another for Adam and Adele at Gaunt’s House in Dorset. We used the ceremony given in The Druid Way and they were both joyous, wonderful events. Other Druid weddings had occurred earlier in the year at Avebury for members of OBOD and other Druid groups, and at Lughansadh Matt & Liz were married in the stone circle of the Brigantia grove.

As well as weddings, this year saw a number of births and sadly deaths too. Somehow it would be nice to honour all these important rites of passage in the Newsletter, and hopefully we’ll develop a format (and a memory system) to do this. Matt & Liz and other members were interviewed for a BBC religious affairs programme, broadcast at Lughnasadh, in which the Goddess, amongst other subjects was discussed.

By Autumn the time of conferences was beginning. Here in England we had the Avebury Druid Conference, which will be followed in rapid succession through October and November by the Fellowship of Isis, Celtic Christianity, Pagan Federation and Pagan Hallowe’en conventions.

In the States, the World Parliament of Religons convened in Chicago with 6,000 delegates from all over the world. Druidry was represented by Steve Blamires of the Celtic Folklore Research Society, representing OBOD, and Olivia Robertson, repesenting the Druid Clan of Dana and the Fellowship of Isis. Olivia tells me her speech was the only one relayed on the BBC back in England.

The Avebury Convention was organised mainly by Tim Sebastian of the Secular Order of Druids. Speakers included John Michell, our Presider, and Gordon Strachan who is writing a book entitled Jesus the Druid! A glorious sunny weekend meant a lot of the meetings could be held on the grass outside, and the Alban Elfed ceremony was held within the Avebury stones with about 100 people participating. During the conference OBOD member Douglas Lyne told us the exciting news that he and a small group have founded the Iolo Morganwg Society to help research and publish that seminal Druid’s works, and there are plans to make the conference an annual event.

By now I have come full circle to Samhuinn again. Much more has gone on in the last year than I can possibly describe in this open letter. Membership of the Order has grown steadily – there are now over 1200 members with 30 seed-groups or groves. This has meant we have been strained a little at the office to cope….answering the 7,000 letters we receive a year does mean some delay in replying unfortunately, but your interests are always our concern, and if you ever feel you would like to contribute somthing to the development of the work, or if you have a criticism, or suggestion for change or improvement, please just drop us a note and tell us!

Finally, on a personal note at the close of this letter I’d like to mention some sources of nourishment that I have found quite apart from my work within Druidry. Three books I read this year which I can really recommend are: ‘The Fruitful Darkness – Reconnecting with the Body of the Earth’ by Joan Halifax (Harper 92) ‘The Chymical Wedding’ by Lindsay Clarke (Picador 90) and ‘The People of the Sea’ by David Thomson (Barrie & Rockliff 1965). I have also found the music of Mary McLaughlin ( CD Cool Waters Rowan Records RWN001) recommended in past-presiders John & Caitlin Matthews Hallowquest newsletter evocative and haunting, and Sheila Chandra’s ‘Weaving My Ancestors Voices’ (Realworld CDRW24) continues to be a wonderful inspiration to meditation. Member Eliza Gilkyson has just sent us her new album ‘Through the Looking Glass’ (Private Music 01005-82109-2) and it’s wonderful!

Let me finish with a thought from Joan Halifax’s book: “In silence, sacred silence, we stand naked like trees in winter, all our secrets visible under our skin. And like winter’s tree, we appear dead but are yet alive.”

With best wishes for the coming silent, snow-hushed time of Winter,

Yours beneath a starry sky,