In February, members of many Orders came together to perform a ceremony designed to protect a great oak that was threatened by the building of the Newbury Bypass. Apparently the atmosphere was tremendously powerful, as over two hundred participants in the ceremony chanted the Awen, forming a circle around the great oak. Is it a coincidence that this one tree was saved from the bulldozers that tore up so many others? 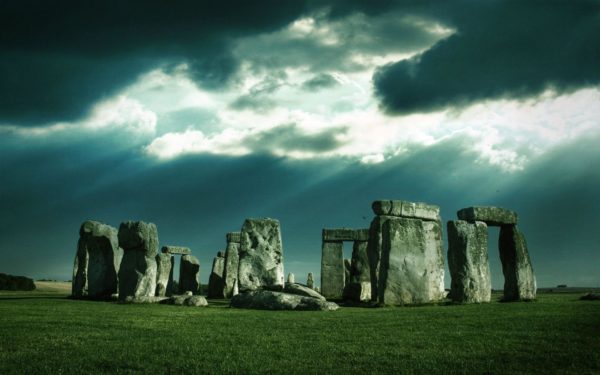 I have been rather enjoying my sabbatical from Touchstone – not having to write a column each month is quite a relief when trying to focus on a book. And it’s so interesting reading what other members have to say! So I thought I would try to get away with not writing the by-now-traditional Annual Review of the Order and Druidry, but this evening I read the reviews that have appeared at Samhuinn over the last three years, and realised that they really help to give a sense of the unfolding story of contemporary Druidry. Writing reviews forms an important part of the course work for the same reason – without them, it’s so easy for events to merge into each other in memory, or to get forgotten or confused. So for the sake of clarity, posterity, and hopefully interest, let’s look at what has happened over the last year:

Between Samhuinn and January 1st peace and quiet reigned throughout the world of Druidry. But somehow it seems that you can’t have one state without also experiencing its opposite, so out of peace arose conflicts and difficulties within the Druid community. On January 1st we learned from the Internet of Archdruid Isaac Bonewits resignation from ADF, one of the two largest and most active Druid groups in America. Email from various positions within ADF flew around the world, clearly indicating immense tensions and divergences of opinion. Later an election was held and a new Chief appointed. Isaac is now concentrating on writing and maintaining a fascinating website on the Net. In OBOD two members became very critical of the way the Order was structured, and this provoked a great deal of heart-searching and enquiry into the way we worked. These members sincerely-held convictions helped us to look critically at the way we were working, and thanks to their giving voice to their opinions, we were able to clarify and articulate more about the Order and contemporary Druidry. It was a tremendous example of the value of listening to constructive criticism (To follow this, see the Touchstones of March onwards).

In Britain there are really three types of Druidry: cultural, political and spiritual. Cultural Druidry is articulated by the national Eisteddfoddau of Cornwall and Wales. Members will often be Christian or of no religious persuasion. The focus of their Druidry lies in the promotion of their national language and culture. As groups, they have no interest in paganism, spiritual development, or freedom of access to monuments such as Stonehenge. Political and spiritual Druidry are more closely entwined. All these groups are concerned with revering the earth, and their membership is probably predominantly pagan. But the groups one could term political have as their main focus or aim, the gaining of freedom of access to Stonehenge. The groups one could term spiritual have as their main focus the teaching and practice of Druidry as a spiritual way, religion or way of life. In Britain, the Council of British Druid Orders has been made up of these latter two groups. The cultural groups have never been members. During COBDO’s seven years of life, tensions have often existed between the different groups, but this year these became unbearable for many, with the result that most of the ‘spiritual’ groups resigned and regrouped as the Druid Forum, leaving COBDO composed predominantly of groups whose main agenda is the gaining of free access to Stonehenge. Most divorces seem to be painful processes, and the pain played itself out in public at some of the Avebury festivals organised by The Gorsedd of Bards of Caer Abiri. As with the ADF conflict, public letters flew between Philip Shallcrass, Chief of the British Druid Order and organiser of the Avebury events, and Rollo Maughfling, long-time champion of free access, and Chief of the Glastonbury Order. As Winter arrives, the dust seems to be settling, and I wondered whether I should mention these events in this column. But I decided to do so for three reasons: firstly because this review is trying to give an accurate picture of the last year, and these events have certainly taken up a lot of people’s time, energy and attention in the Druid community over the last year. Secondly, because members will have learnt of these things from a distance, from the odd mention or letter in Touchstone, and it must seem pretty confusing from a distance. And thirdly because I guess most of us have a natural distaste for conflict and argument, and yet these things happen, and as Druids one of our interests has always been peace-making, and you can’t understand peace-making unless you can understand conflict, so shying away from considering it isn’t going to help! Druids aren’t ostriches!

At the crux of this particular conflict lie two different points of view: the ‘political’ Druids feel passionately that they need to direct most of their energy into fighting for the freedom to worship at Stonehenge – for everyone, not just Druids. At present, access to Stonehenge is strictly controlled. It is the most visited tourist attraction in Britain, and during opening hours access can only be gained by paying an entrance fee and viewing the stones from a distance (about 3 metres). As an example of the strictness with which the stones are guarded, our six-year old daughter once tried to place a posy of flowers on one of the stones that was near to the cordon, and was immediately prevented from doing so by one of the uniformed guards on the site. Outside visiting hours, you can gain access by writing to English Heritage and paying £10 per person to spend time amongst the stones. Some Druids think this is an outrage, and feel that to do this, one is compromising all one’s ideals. Others take a more pragmatic approach and believe that the stones need to be protected, and that without the guardianship of English Heritage, they would be subjected to vandalism and abuse (as some other sites have been – stones at Avebury have been daubed with paint, fires have been lit in West Kennet Long Barrow, damaging it etc). They also appreciate the opportunity to hold ceremonies there in privacy after visiting hours. There are persuasive arguments on both sides, and the membership of the ‘spiritual’ groups, such as OBOD, will be made up of some people favouring one of these viewpoints, while others in the same group will favour the opposing view. The difference between the spiritual groups and the political groups lies in the one-pointedness of their focus. For OBOD, the BDO and other ‘spiritual’ groups, Stonehenge is one of many issues on their agendas. For the ‘political’ groups, such as The Glastonbury Order and the Secular Order, the Stonehenge issue occupies nearly all of their attention. And whereas the spiritual groups have a range of opinions within their membership, the political groups have simply one ‘unilateral’ aim: freedom of access. In the end, OBOD, BDO, and the Ancient Order of Druids, left COBDO because they wanted to talk about a whole range of issues within Druidry, – not just about Stonehenge.

Out of struggle and conflict, sometimes new strength and clarity can emerge, and I hope this is what is happening now within Druidry. In February, members of many Orders came together to perform a ceremony designed to protect a great oak that was threatened by the building of the Newbury Bypass. Apparently the atmosphere was tremendously powerful, as over two hundred participants in the ceremony chanted the Awen, forming a circle around the great oak. Is it a coincidence that this one tree was saved from the bulldozers that tore up so many others? Because Druids were involved, the event got good press coverage. Without Druids there, road protesters felt there would have been little media attention. This turns on its head the argument that we should not get involved in direct environmental campaigning, because it will open the campaign to ridicule by the media. Instead it shows that the public and the media love trees, and they know that Druids are tree-lovers par excellence. Before the end of the millenium, I believe the overall public perception of Druids will be as champions of the environment, and in particular as spiritual guardians of trees and woodland.

February also saw a gathering of Druids and Christians in Oxford, which was echoed and developed at the other end of the year by a gathering of Druids, Christians and Wiccans in Lewes in October. In April we held the Iona Retreat amidst the most glorious weather. Simon O’Dwyer came over from Ireland to present the Order with a bronze Druid horn – a replica of a dord found near Battle in Sussex. It now has been sounded on Iona, in Stonehenge, at Avebury, in London, and many times in Lewes. The Spring also saw OBOD resigning from COBDO, and four seedgroups joining forces to celebrate Earth Healing Day in Oxfordshire.

In June the Order’s Internet Website was launched – complete with art and poetry galleries, an archive of articles by many contributors, and information on the Order and the training programme. Dutch members held a weekend that was so stimulating, they plan to make it an annual event. I hope to be able to make it each year too!

In June we completed negotiations with Westbrook College in the United States to have them give 50% credits to members who have completed their OBOD training. Put simply, this means that your OBOD course work can count for up to half of your course work (and hence fees) for a Bachelor’s, Masters or Doctoral degree, taken through them. They are a distance learning college that teaches many interesing subjects including Transpersonal Psychology and studies in Mythology.

July saw both the British and American Summercamps taking place. I was lucky enough to attend both, and they were both fabulous! John Matthews’ Druid Source Book was published in August as was The Druid Renaissance – a collection of eighteen writers talking about Druidry from all sorts of different perspectives: the spiritual, the psychological, the historical, the poetic, etc. Together these two books significantly increase the ever-growing base of solid, respectable work on Druidry which is needed for Druidry to really flourish and grow into the next century.

On a hot sunny day straight after the Lughnasadh ceremony at the summercamp near the White Horse in Oxfordshire, we held a book launch party in Avebury, followed by the first meeting of The Druid Forum, mentioned earlier.

As the summer continued and Autumn approached, in America there was the third New England Druid Summit, while in Australia members held the Order’s first Alban Eilir Retreat. The Druid Animal Oracle was finally published in the UK (by Connections Publishing). Previously it was only published in the US and Australia.

As Samhuinn approaches in a few days, we’re off to the OBOD camp. There’ll be hot tubs, a sauna, fireworks, a ‘Samhain Nightmare’ psychodrama…If I live to tell the tale, you’ll hear from me again sometime in the New Year!

May the coming Year be filled with joy and creativity for you,

Yours in the Autumn sunshine,