At times I feel as if I am spread out over the landscape and inside things, and am myself living in every tree, in the splashing of the waves, in the clouds and the animals that come and go, in the process of the seasons.
C.G.Jung 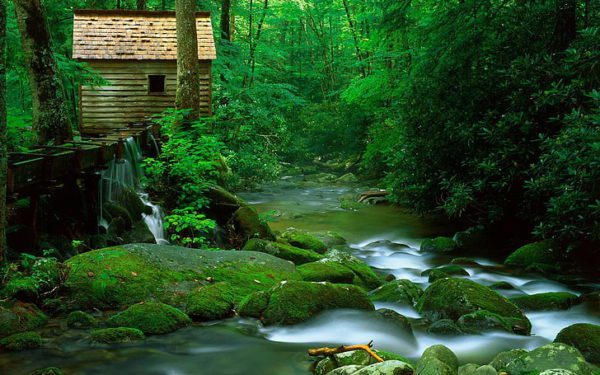 Every year I review the work of the Order and developments in the field of Druid spirituality – looking back over the last twelve months to summarise and record, as much as is possible, all that has happened. But as Druidry and the Order blossom and flourish in the world the task gets harder – simply because so much more happens each year.

I have just flown over to New Zealand to spend time revising the Ovate Grade material, as I did in 2000 to revise the Bardic grade. Sitting in the same beautiful and tranquil spot, gazing out across the ocean where whales and dolphins swim, I close my eyes and enter the Sacred Grove. I speak to my guide and explain that each year more and more events occur within Druidry and that I want to avoid the Annual Review becoming just a catalogue of events. My guide says: “Seek an image, and from the image the story of the year will unfold for you.” I close my inner eyes, and there in that other realm the image appears: I am standing in a circle with fellow members and friends. We are beside the forest of Broceliande in Brittany, in a small grove of ancient oaks which lies like an island surrounded by pasture. A dozen cows graze around us in the sun. We stand in the shade of the oaks, a vast dolmen slab to one side of us. The ceremony begins: it is led by another member, freeing me from that sense of responsibility that holding an ‘office’ brings, and at the same time affirming the spirit of the Order that says ‘yes we need people to take on roles and jobs, such as Chief, but the Chief is not a guru, the Order does not ‘follow’ a leader: instead it helps to empower each of us to fulfil our lives in the best possible way for us as individuals.’ So I am free, an individual, a fellow-member, standing with other members in a grove, in a field in France, on a hot summer’s day in the third millennium.

The ceremony proceeds. Voices speak in French, German, Dutch and English. It doesn’t matter that we can’t all understand everything with our minds. Our hearts understand. Our bodies understand. And because the structure of the ceremony is familiar, we feel secure and we trust the process. Flowers, nuts, seeds and feathers are placed in the centre as offerings by each member with a prayer. The ceremony finished, we hug and chat, some of us crawl under the dolmen slab to tune into the powerful atmosphere of this place, and then we wend our way home.

This moment of the summer encapsulates the predominant theme of the year for the Order: expansion with continuing intimacy. Although we are now the largest grouping of Druids in the world, with more and more new members joining every month, we are still a relatively small and intimate group of people – although there are thousands of members, only hundreds at any one time are receiving the Gwersu, and when we gather together there is always that feeling of warmth and familiarity. We share the same ideals and values, even though our languages may differ, and we draw inspiration and spiritual strength from the same source, that is called Druidry. One of the ways we do this is through books…

During the last year at least four books have been published that each in their own way helps us to connect to the spirit and the inspiration of Druidry: Order member Cassandra Eason’s The Modern Day Druidess looks at Druidism from a specifically feminine perspective; Ronald Hutton’s Witches, Druids and King Arthur, presents a range of stimulating essays, including one which focuses on the recent history of Druidry and the Order; John Matthews’ The Green Man Tree Oracle which includes 25 cards of exquisite paintings by the Order’s Pendragon, Will Worthington; and The Rebirth of Druidry, a new edition of The Druid Renaissance, which includes a new and evocative preface by Tom Cowan, who wrote Fire in the Head. You can order any of these books from the office, which has moved back to Lewes in September. After a five year stay in Portslade, just west of Brighton, it is back in the same location that it was before, which I found described in my Annual Review of 1994: ‘On Alban Hefin we moved the office to a different location in Lewes, and the feeling of space and connection with nature is wonderful. Before then, the office had been very cramped and faced a busy street. Now it is spacious, looks on to trees, and is located at the end of a quiet lane that runs its way down a southern slope of the Downs just on the edge of town.’ Now we’re back there again, in a beautiful space which has been completely re-organised. The spiral has turned once more and it feels good to be working in Lewes once again. We took the opportunity, on moving, to review the last fifteen years of the way the office works. We streamlined systems, cleared out masses of ancient redundant paperwork, and organised the ever-growing archive. Each of us clarified our roles and what we hoped to achieve with them, and Cerri, who had taken a step back in the Spring to focus on her artwork, affirmed her feeling that art rather than office duties was calling her, and we bid her a fond farewell, knowing that she will continue to be actively involved in much of the Order’s work – provided it doesn’t involve envelopes or databases! So now the office is run by Stephanie, Damh and Annie, and as always is only a phone-call or email away. Each day we were receiving over 200 spams, which is why the address office@obod.co.uk is now filtered through a system called Spamarrest. It works fabulously – we get no spam at all, but we are sometimes concerned that in its rigour it may also filter out members’ emails. If you don’t get a reply after a few days, please email again on office@druidry.org which bypasses the filter. Another development this year has been the active archiving of Order material. Gordon Cooper from Seattle has taken on the role of Archivist and has begun the gargantuan task of photocopying the entire archive, and then scanning it, so that it can be stored on CD. But he has made a wise decision – to undertake this work each summer in the idyllic setting of Spielplatz in Hertfordshire, where Nuinn and Gardner almost certainly began their conversations which helped to give birth to so much of what we do today. So whilst admiring Gordon for his dedication, we can also envy the lifestyle he has evolved for himself.

Gordon is also a recipient of the Mount Haemus Award, a scholarship the Order gives for research. So far, awards have been granted to Ronald Hutton, John Michael Greer, and just recently to John and Caitlin Matthews. Next year we hope to publish a set of essays by the ‘Mount Haemus Mob’, as I call them, and to hear them speak at the 40th Birthday celebration of the Order, or at a Solstice Assembly.

The last two Assemblies at Glastonbury have been extraordinary: in the winter we were captivated by the talks of Roland Rotherham and Timothy Freke, and held a magical solstice ceremony in the gardens of Chalice Well – 150 or so of us each holding lanterns in the dark around the old yews in the garden. In the Summer we held rites on the Tor and in Stonehenge, and at the party we were enchanted by the harp playing of Myrddhin and Zil from Brittany, before crowning Myrddhin as an Honorary Chief Bard of the Order. At Imbolc, Beltane, Lughnasadh and Samhuinn the camps have continued to inspire, challenge, amaze and teach us at every turn. We haven’t held an Imbolc one for years, but a yearning for the magic of camps in the dark months collided with the generous offer of Garth and Elaine to host one on their land, and hey presto another tradition was born, and there will be another one there next year. The way camps are run has evolved too, with Clare handing over their coordination to a team of dedicated and experienced campers, after having done a wonderful job over the years. I have heard on the grapevine that Otter Bob is already creating new structures for future camps – outlandish hybrids of tipis and yurts: tirts or yurpees for the children to play in…

As well as the camps this year there were Assemblies in Holland and Australia, the gathering of Druids at the Celtival in France, more workshops by Susan Henssler, and Barry & Kate Reilly, and a powerful ceremony at Stonehenge organised by Bill & Glyn Melnik, to bring together Druids and Christians.

There are now so many groups in the Order that I do not know about many of the events that have occurred. But I do know about our local Anderida Grove’s painting of the Long Man, in liaison with the Sussex Archaeological Society, and of their successful weekend camp nearby. I have also heard from the Raven’s Claw seed-group in Canada who held a magical camping retreat in October. And in August I witnessed for myself the inspiration of Ardan’s workshop on Merlin and Taliesin in the fabulous setting of the Cae Mabon centre in Snowdonia.

In the wider world of Druidry, new groups and websites have continued to spring up, and out of the British Druid Order, the Druid Network has evolved to present the many facets of Druidry to those with internet access. Do have a look at their website at www.druidnetwork.org

The year began with enormous tension as the threat of war built and built. We tried to keep pace with this, and offered alternative and more hopeful perspectives in the section on the website entitled ‘Druidry and the World Situation’. The year has ended with less tension, though politicians and newscasters would have us continually worried if we listened only to their voices. But hopefully each of our voices, and the voice of the Order as a whole, can send different messages out into the world – messages of hope, meaning and practical idealism.

With every blessing for a year of Peace and Happiness to come, Yours as the year turns to the dark in the Northern Hemisphere, and the light in the Southern hemisphere,