To look backward for a while is to refresh the eye, to restore it… 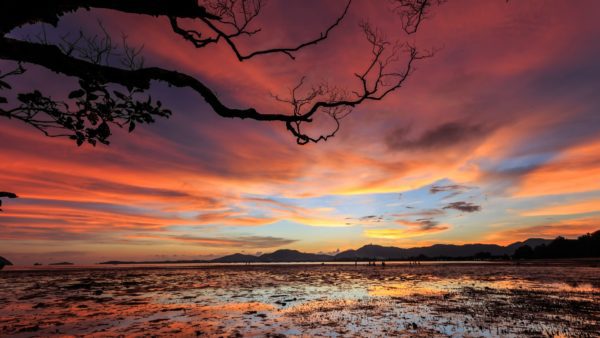 A year flows by like a river, the water that passed its banks over the last thirteen moons seemingly gone forever. As Druids we maintain that such a river should not act like a Styx, bringing forgetfulness, but instead should serve to bring us nourishment, refreshment and healing. For water to benefit our bodies and souls, we need to bathe in it and drink deeply of it. It is the same with the flow of events: to really learn and grow from their passing we need to take them in, contemplate them, digest them. This is why we recommend frequent reviews in the course – a daily review ideally before falling asleep, and comprehensive reviews at the end of each grade.

Each year, as we reach the time of Samhuinn in the northern hemisphere, I review the events and developments in the world of the Order and of Druidry and you can read previous annual reviews on the Order’s website, in the Touchstone section.

More than ever this year I have been impressed by the way in which the Order has become a truly worldwide community. An image from the Midsummer Gathering at Glastonbury sums this up: on the Sunday morning as several hundred of us gathered in the Town Hall, druids from Italy thrilled us with dances of the elements, and then Jan and Brianna, from Germany, stepped forward. Jan read out an ancient pagan prayer in Old German, Brianna translated it. Then Jan, to the tune of a Joe Cocker song, chanted the prayer as we slapped our thighs, clapped our hands and stamped our feet. There we were, from all corners of the world, united in our love of Druidry as a spiritual tradition and the Earth, our home.

Such events are inspiring, and evoke a real sense of community, but it is important to see them in perspective. The Order now has thousands of members all over the world and no one gathering can capture its full nature – that can only be experienced on the inner planes where time and space offer no obstacles. On the ‘outer plane’, as our everyday reality is called in esoteric language, we need to adopt a different approach. Thinking globally and acting locally is one answer, and this is what a group of seed-groups, groves and members did on the west coast of the USA this year by forming an alliance called ‘The House of Danu’. They began with a website and forum and then organised an inaugural gorsedd this Lughnasadh. Although describing themselves as an alliance of groves and seed-groups within OBOD, they have deliberately kept membership open to members of other Druid groups, and to anyone sympathetic to the ideals of Druidry, in an admirable demonstration of openness and hospitality. I had hoped to attend the gorsedd, held at a Buddhist retreat centre in the Californian hills, but at the last minute I had to stay in Britain to be with my father who passed to the Summerlands a few weeks later.

Regional gatherings have also occurred in other countries: members and friends in New Zealand gathered once again for a summercamp near Wellington, and members in Holland held their second camp too. A member in France organised a Samhain gathering for French-speaking members in Brittany, and there have been two members’ events in Germany – a weekend camp and a weekend in Prichsenstadt that I was able to attend while I was on a speaking tour organised by my German publisher. Two of my books ‘What Do Druids Believe’ (Arun) and ‘Sacred Places’ (National Geographic) translated into German and published this spring and summer have been followed by a CD of five guided meditations which will be available in bookshops in the German-speaking world in November. Damh and I will make an English language version of this next year. A combination of the books now available on the subject in translation, and the lively discussion forums in German on both the druidry.org message board and on druidry.de, have meant that Druidry in Germany is growing by leaps and bounds. Work is under way on a translation of the Ovate course, and next spring a translation of an extended version of ‘Druidcraft’ will be published.

In the summer Damh visited another group of German speaking Druids in Vienna, playing to OBOD members and pagans who had gathered for an annual camp outside the city. Thanks to the organisers, Pagan Federation International, he also played in Prague where a fledgling group of members now follows the Czech version of the course. Members in Portugal have succeeded in translating the Bardic gwersu and are launching the course in November. They already have an OBOD Portugal website and forum set up, and hopefully our Portuguese-speaking members in South America will be able to make use of the material, or at least use it as the basis of their own translation to account for the regional differences.

Meanwhile translations of the course are proceeding in Italian and Spanish. Perhaps we should have translations in Hindi and Gujurati too, since some interest in Druidry is developing in India! I went there in February to participate in a conference that sought to foster connections between different spiritual approaches and together with four Druids from Brittany we held ceremonies with followers of many different traditions. The conference organisers are holding another meeting in the USA and two members will be participating – following up on ideas about the connections between Druidry and the Dharmic traditions that we began to explore in Nagpur in February.

While all this activity around the world continued apace over the year, in the UK the Order was chosen as a subject for Religious Education with the Oxford Cambridge and Royal Society of Arts examination boards for students at GCSE level (the General Certificate of Secondary Education is taken usually around 16 yrs). This feels like a major step forward and with the skilled help of member and RE teacher Andrew Brennand we now have a set of educational materials on Druidry available for download from the website. These include lesson plans, teachers’ notes, and source materials such as readings and video files.

Keen GCSE students might find inspiration by browsing the Mt Haemus section of the website, which has copies of all past papers submitted available for downloading. This year’s award was given to Dr Andy Letcher, author of the astonishing ‘Shroom’ published by Faber and Faber in 2006. Andy has written a provocative study of all the current courses available in Bardistry, including the Order’s. Take a look and see whether you agree with his views on Awen and Bardic training.

More food for thought on Druidry has been provided by Ronald Hutton, whose magnum opus of 491 pages, ‘Blood and Mistletoe: The History of the Druids in Britain’, was published by Yale University Press in April. Such is the book’s rigour and scope that it was reviewed widely and to great acclaim, with both the Independent and Touchstone seizing upon the same phrase to describe its effect upon the reader as a ‘tour de force’. Ronald kindly noted in the Acknowledgements that the Order ‘functioned as a research council in its own right’, and the publication of what is undoubtedly the most comprehensive study of the history of the Druids ever undertaken, feels like the completion of a cycle that began a decade ago with the granting of the first Mt Haemus award to Ronald towards the end of 1999.

Other books published by members include Danu Forest’s delightful ‘Nature Spirits: Wyrd Lore and Wild Fey Magic’ (Wooden Books) Christopher Street’s intriguing ‘London’s Camelot and the Secrets of the Grail’ (Earthstars Publishing) the second book of Penny Billington’s witty druid detective stories ‘Beauty and the Brats’ (Appleseed Press) and Kevan Manwaring’s comprehensive survey of new Bardic chairs in ‘The Book of the Bardic Chair’ (RJ.Stewart Books). Emma Restall-Orr’s brave and exciting exploration of the Feminine ‘Kissing the Hag: The Dark Goddess and the Unacceptable Nature of Women’ came out at Samhain last year (with O Books), and Mark Townsend’s moving exploration of the quest for magic and meaning, ‘The Path of the Blue Raven’ has just been published, also by O Books.

Jay Ramsay, an old friend of the Order, whose poetry appears in the gwersi, has recently released a collection of poetry: ‘Places of Truth – journeys into sacred wilderness’ which is published by the creative team at Awen publications, a small printing press based in Bath that publishes ‘ecobardic’ poetry and fiction. Details at http://www.awenpublications.co.uk.

At the summer solstice in June the book that I and fellow member Richard Heygate wrote was published. Titled ‘The Book of English Magic’ (John Murray) one of its twelve chapters focuses on Druidry, and it has – I hope – shown how Druidry is an integral part of the wider tapestry of the Western Mystery Tradition. At the same time on Primrose Hill in London a memorial plaque commemorating Iolo Morganwg was unveiled. Made of Anglesey Stone and designed by the sculptor John Meirion Morris it features an image of Iolo surrounded by twelve Awens.

By the summer a project that had been two years in the making was completed and the Ovate audio course was published. The CDs feature music, story-telling, meditation journeys, poetry and teaching in a way that helps the gwersu come alive for the listener. As we entered a glorious Indian summer in this part of the world a group of us went on retreat to Cae Mabon, a magical hobbit-like eco settlement in Snowdonia. From there we visited Dinas Emrys and the island of Mon, soaked in the hot tub and listened spell-bound in the roundhouse to the old tales.

As ever, while new developments are bound to feature most prominently in any review, they could not have occurred without the steady pulse of continuous effort that keeps the Order growing as a vibrant community of learning and spiritual support. As the camps went through one of its periodic deaths and rebirths over Samhain last year, the huge amount of work done by Keith and Ruth and the camp team over the years has been built upon by a new way of running camps – with a constitution and trustees developed over a series of meetings into the summer. The new camp team, groves and seed-groups, Stephanie and Annie in the office, Damh working so skilfully on the audio courses and podcasts, Selene and the group of administrators and hosts on the message board, Penny editing Touchstone, Peter Dryade, Vyvyan Serpentstar, Susan and the team of tutors and bardic coaches, Jurre and Agnes running the distribution office for the French, German and Dutch courses, Jarka overseeing the Czech course, Alex and Sofia the Portuguese course – as the years go by the list gets longer. But each of us, named and unnamed, are trying our best simply to be of service, to help the Order develop – not in order to become a monolithic organisation, but instead as an organic network of different initiatives and configurations that together fall under this rather unusual ‘umbrella’ that we call the Order of Bards Ovates and Druids!

May the next year be as exciting and as creative as the last!

Yours under the warming sun and the clear blue sky, and with every good wish for the coming New Year,