Today, far from Druidry seeming like some arcane fringe activity, our preoccupations are now centre-stage: they address the most urgent and important issue of our time: how we galvanize all of our potential – practical, creative, intellectual, and spiritual – to protect and restore the Earth... 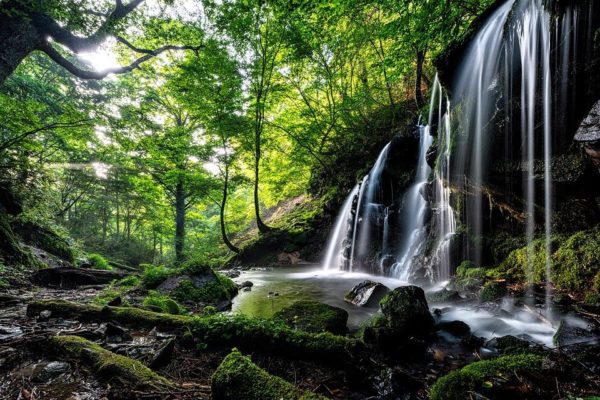 Today, far from Druidry seeming like some arcane fringe activity, our preoccupations are now centre-stage: they address the most urgent and important issue of our time: how we galvanize all of our potential – practical, creative, intellectual, and spiritual – to protect and restore the Earth.
Philip Carr-Gomm, Farewell Address, June 9th 2020

In this review of the life of the Order over the last year – from Samhain to Samhain – I, Philip, will write about the period up until June 9th, when I handed over the role of Chosen Chief to my successor Eimear Burke, who will then complete the review to take us to Samhain 2020.

After Samhain 2019, the event that stands out clearly in my memory is the Winter Gathering in Glastonbury. Little did we know it, but this turned out to be the last big gathering we would hold for some time – until we are able to safely organize another event, hopefully in 2021.

We also didn’t know that this would also be the last time we would hold such a bounteous mistletoe rite. The farm which allowed us to harvest the magical plant each year has been sold, and we will no longer be able to gather a great pile of mistle in the centre of our circle at Alban Arthan…. unless a miracle occurs, but of course they can and do!

After a beautiful ritual in the early morning light in Chalice Well gardens, the next highlight of the day was during the afternoon, when technical difficulties delayed our two talks. Damh the Bard told an impromptu story and Jennifer O’NeillKaan, sang ‘Summertime’ in the most glorious way. After the AV presentation of Peter Knight and Sue Wallace, based on their book ‘Albion Dreamtime: Re-enchanting the Isle of Dragons’, David Bramwell took to the stage, and seated inconspicuously behind a desk lit by a single candle, proceeded to deliver his multi-media work of art: ‘The Cult of Water’. Such was the inspiration and uniqueness of this presentation, that the entire audience rose to their feet to give a standing ovation.

Over the following months, we were busy in the office creating the new website. With over 200 pages, this proved an absorbing task, but by Alban Eilir it was time for the launch. Just before that, Stephanie and I had attended another kind of launch. In the magical setting of the 12th Century Boxgrove Priory, we listened to the premiere of Nathan James’s beautiful choral work On Windover Hill, inspired by the great hill figure of the Long Man of Wilmington, performed by the Royal Philharmonic Concert Orchestra and the Harlequin Chamber Choir. There was other music inspired by the Sussex landscape, contemporary dance, an art exhibition, and readings of poetry and prose, including me reading an excerpt from The Druid Way suggesting the Long Man could equally well be the Long Woman, and Justin Hopper, reading from his book Weird Albion about his encounter with the Anderida Grove’s festival at the site. You can read about the project and hear a BBC radio documentary on Nathan’s website: https://www.castleymusic.com/onwindoverhill

The BBC also featured that intrepid couple Penny and Arthur Billington back in February, as they explored Glastonbury with the presenter Clare Balding. Weaving their Druidry naturally into the conversation, you feel as if you are in the landscape. You can join them on their walk via Penny’s fascinating and recently revamped website: https://www.pennybillington.com

By Alban Eilir the lock-down was in place in the UK, but thanks to the internet we were all able to keep in touch. We ran the office in shifts, some groves and seed-groups switched to zoom, I ran a Home Retreat series of meditations which is still available: https://artoflivingwell.org.uk/p/homeretreat

DruidCast and Tea with a Druid continued to keep up the feeling of connection, and Damh the Bard, our esteemed Pendragon, began regular live concerts on Facebook, as well as releasing in April his stunning musical story-telling of the Mabinogion, this time of the Third Branch: https://www.paganmusic.co.uk/. Also in April, Lost Histories’ wonderful documentary, ‘A Druid’s Pilgrimage’, premiered online, which features many OBOD members.

More students began enrolling on the online celebrancy courses, seeing the lock-down as an opportunity to retrain in a new field of service, and in May Australasian members pioneered a way of bringing us together that was just fantastic. It was called SHOBODO – Southern Hemisphere OBOD Online. Over a week, a whole series of events were offered in small and big groups: talks, workshops, rituals and concerts. The sadness at not being able to meet in person was alleviated by friends old and new being able to come together in this way.

Due to government restrictions, we had to postpone the big event we were planning for Glastonbury in June, to mark the handover of the chieftainship to Eimear, but we hope it can be held in June 2021. We need to be realistic, though, and at this stage we cannot be sure this will be possible. If we cannot go ahead with a physical gathering, a virtual celebration along the lines of the highly successful SHOBODO may be the answer. The upside will be a reduced carbon footprint, and members will be able to attend wherever they are in the world. As soon as we are sure whether or not we can safely meet together, we will announce this and contact all ticket-holders who booked for last year’s celebration.

Despite the huge amount of planning that had gone into the 2020 June event, as it had into events organised by OBOD members in the US and Europe which also couldn’t take place, we just had to postpone it and switch our efforts to working online. The result? An online ceremony sound-engineered by Damh the Bard that was extraordinarily effective, despite the unusual circumstances. Once it aired, I could feel that the mantle had indeed passed to Eimear. I was no longer Chief of the Order, and I could take my place amongst the membership – happy to be a part of this great family who love the Earth and our place within it. Over to you Eimear to complete this year’s story!

Thank you Philip. I’d like to pay my own tribute to Damh’s magical skills in creating what for me was a very powerful and moving ceremony. While I sat in my sitting room I could feel the mantle being handed over to me. The sensation was extraordinary and one I could never have predicted using an online forum. On reflection afterwards, I realised that the Installation ceremony was meant to happen this way. I was right there in that moment, fully present with none of the distractions that would have been there had the ceremony been held physically. It also allowed so many more members and non-members from all over the world to attend this event. Having said that I hope we do get to gather physically in the future.

Despite the current pandemic, I know that a number of us have been kept busy and have attended a number of online events speaking about Druidry. What has struck me is how relevant Druidry is today, how positively regarded it is, and how we can weave a web of interconnection with other spiritual traditions. I was asked to give a blessing at an online Event for the Summer Solstice hosted by: Ali Rabjohns of Sacred Earthsong. Here is the link: https://youtu.be/6TsO2R3-sRI

In July, The Sustainable Narratives Conference hosted by Vichaar Manthan, which I wrote about in an article in Touchstone, took place online. “The aim of Vichaar Manthan (VM) is to provide a forum for exploring ideas that affect our society through a Hindu cultural lens and to build a better cohesive and also plural society. I was excited to discover the similarities between Hinduism and Druidry.” https://www.vichaarmanthan.org/sustainablereligion

Another exciting event some members of the Order and I attended, was the online Caravan of Unity Europe in early September. The theme for this event was Unity in Diversity. This is a concept which is close to my heart and I mentioned it in my Opening Address on June 6th. The Caravan of Unity travelled through Europe over a period of three weeks towards Unity in Diversity and Sustainable Peace. It was wonderful to hear the perspectives of fellow members Gail Nyoka, who was born in Trinidad, brought up in the UK, is a Canadian citizen, living in the USA; Ellie Tallett who is a Buddhist; and Oein De Bhairduin who is a member of the Traveller community in Ireland. You can watch this on https://caravanofunity.eu/

The International Centre for Cultural Studies (ICCS) hosted an online Sun Seminar at Alban Elfed (Cónocht an Fhómhair). The aim was to explore the universal meaning of the Sun in Indo-European traditions, philosophy and culture which members of the Order attended. Jonathan Woolley gave a wonderful presentation from a Druidic perspective, and I was invited to create a short video about how the sun is celebrated within Druidry. https://youtu.be/UT4eZa8_juw

Our Italian members held their annual Seminario in October. I was able to attend a short Q & A session via Skype. It was wonderful to connect with each other, and to witness how our members in Italy were able to hold a gathering so creatively while adhering to the Pandemic guidelines for safety.

Penny Billington and Matt McCabe held their Ritual and Meditation workshop in Glastonbury in September which was a great success, despite the social distancing restrictions they had to observe.

2020 marks the 20th anniversary of the Mt. Haemus Award. To mark this special year, in which one Chief retired and a new Chief became head of the Order, we have given the Mt. Haemus Award to two members: Dr Michelle LaFrance and RoMa Johnson. RoMa contributed ‘The Well and the Chapel: Confluence’, and Michelle: ‘’The Feminist Druid: Making Way for New Stories/New Work. Both papers are excellent, and can be found on the website here: https://druidry.org/resources/category/mount-haemus-lectures

This year, despite the constraints, a number of new books by members and friends on Druidry or related topics have been published. I hope we have not left anyone out. If so, please let us know.

Lichtworte. Wegweisung in zwielichtiger Zeit.  Selected, redacted and with an introduction in the Theology of Karl Braun

Luke Eastwood, The Druid Garden: Gardening for a Better Future Inspired by the Ancients

Liz Williams, Miracles of Our Own Making: A History of Paganism

In September, I started holding weekly online ‘Fireside Chats with Eimear’, where I am in conversation with members of the Order who are not well known. As a story-teller I am interested in people’s stories, and my guests have amazing stories to tell about what Druidry means to them. I’ve been blown away by the insights they have offered from their own lives and cultures. As an Order we really are both diverse and unified. The response from viewers has been very positive. The conversations are broadcast on Thursdays at 8pm UK time. If you cannot tune in at that time, you can find recordings on the Order’s YouTube and Facebook channels.

I really appreciate the welcome and support I have received from members of the Order since taking on this role, and I am delighted by so many members reaching out to me to welcome the Irish content I bring.

2020 has been a most difficult and challenging year bringing with it fear and uncertainty alongside gifts and silver linings. We are blessed with the gifts of Druidry which provide us with so many resources to deal with these challenges. As we head towards the dark half of the year, may we draw in and find time for reflection and renewal. May 2021 bring more clarity and healing to our lives.