The DruidCraft Tarot has introduced many readers to the ways in which Wicca and Druidry can be harmoniously integrated. Here, its authors Philip & Stephanie Carr-Gomm explain some of the background to its creation. The DruidCraft Tarot conveys the teachings of Druidry and Wicca through the 78 images of the Tarot painted by Will Worthington, and through the accompanying book of the same name by Philip & Stephanie Carr-Gomm.
See details of this online course which works with the Tarot, and read the following interview with Philip about the deck:

Who illustrated the deck?

Will Worthington will be known to many readers as the artist for The Druid Animal Oracle, but in this new work he has moved from using gouache to tempera – a method favoured by the Renaissance artists, using ground minerals and egg yolk. The artwork Will has created is extraordinary – it almost seems to glow, and each card seems to act like a window on a magical world that Will reveals. In the accompanying book Will explains how he worked to create the cards, and the special typeface he designed to illustrate the cards and book.

Why a DruidCraft Tarot? Since when did Druids use Tarot cards?

To answer this question we need to realise first of all that there is already a ‘tradition’ of Pagan Tarot decks, including Bob Stewart’s Merlin Tarot, and the Matthews’ Arthurian & Celtic Wisdom Tarots. The Tarot is a tool for self-understanding and for exploring metaphysical questions, and it is a tool that can be used to examine or explain any spiritual system, which is why you get decks that explore the world of Zen or Alchemy, for example. But, as Pagan Tarot authors have found, it is particularly suited to Paganism, and hence to Druidry & Wicca, because the Minor Arcana are based upon the powers and associations of the four elements, and the Major Arcana are based on an awareness of the dual forces of God/dess, Yin & Yang, Masculine and Feminine. In other words the Tarot and DruidCraft go together like milk and honey.

But there are even more reasons to link Druidry with the Tarot: the classical authors said the Druids taught Pythagorean numerology, and the Tarot is based on numerology too. And it was Bob Stewart who first suggested, in The Merlin Tarot, that many of the Major Arcana images can be found in the Vita Merlini – and it is quite possible that Tarot images might originally have been the pictures used by the Bards of old to guide them in their tale-telling.

All these would be good enough motivations in themselves for creating such a Tarot, but there is one more persuasive reason: modern Druidry and Wicca have been strongly influenced by The Golden Dawn stream of the Western Magical Tradition, and it was this tradition that gave birth to three of the most influential decks of the last century: the Smith-Waite (Rider-Waite), Thoth and BOTA decks. Since Druidry & Wicca share the Golden Dawn as one of their many roots, then working with the Tarot represents a recognition of that stream of inspiration, and builds upon it.

Is The DruidCraft Tarot a traditional deck or have you made many changes?

We have built on the idea that modern Wicca and Druidry have been influenced by the Golden Dawn, and so our deck continues in this tradition – particularly of the Smith-Waite (Rider-Waite) because we feel most connected to this deck, and it is also the most widely used now. So unlike older decks, and say the Thoth deck, we have not chosen to have the pip cards painted with simply the appropriate number of cups, swords, wands or pentacles. Instead we have followed the example of Pamela Coleman-Smith (and some of the Sola Busca deck from long ago) to use complete pictures for each pip card. Much of the inspiration has come from the Coleman-Smith images but we have departed radically in certain ones, as in the Eight of Pentacles shown on this page. 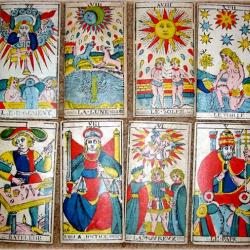 What about the Major Arcana?

We have changed the name of The Devil to Cernunnos and have explained why in detail in the book. Likewise with Temperance, which we have changed to The Fferyllt to reflect the alchemical nature of the card, and Judgement whose name we have changed to Rebirth. We have also changed The Emperor and The Empress to The Lord and Lady, but all other names stay the same.

How do you present the Arcana in the book?

99% of books on the Tarot begin by discussing the Major Arcana, then move on to the Minor. We have reversed this and begin by looking at the court cards – urging the reader to explore them as 16 personality types, just as one might explore the 12 types of the zodiac, for instance. Then we move on to the Pips, then the Majors. This way it feels as if we approaching the Mysteries appropriately, rather than jumping straight in, then considering the Minors later. 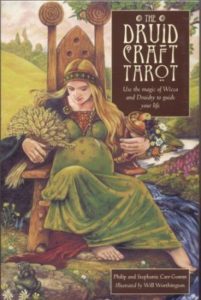 What about the famous 8 & 11 Argument in the Majors?

Ah! We’ve had many heated debates about this with friends and tarot experts. We think it’s a mistake to fall into the trap of being dogmatic about the Tarot. It is capable of a multitude of ways of understanding it, interpreting it and even arranging it. Think of how many different spreads you can use! We find it works whether you place Strength at 8 and Justice at 11 or vice versa. So in the book we mention that you can choose to do either, but we have opted for placing Strength at 8 for three reasons: firstly it continues with the GD tradition that is historically associated with modern Druidry & Wicca; secondly since the Smith-Waite deck is the most widely used, this is the sequencing most readers will be familiar with; and thirdly dividing the Majors into three sets of seven cards matches perfectly with the spiritual journey undertaken through each of the grades of Bard, Ovate & Druid, and Strength works very well in eighth position in this scheme.

Do you give any new spreads in the book?

Yes. There is a section at the end of the book in which we offer a blessing and dedication ceremony to begin working with the deck, or the Tarot generally, and then we offer six spreads. Two will be familiar to users of The Druid Animal Oracle: the Awen spread and the Spirits of the Circle spread. We have included these because over the last decade so many people have told us how helpful they can be. Then we’ve taken two of the most important symbols in our traditions: the Pentagram and Hexagram, and offered a Pentagram spread to help you explore your four functions and the influence of Spirit in your life, and a Hexagram spread to help you explore relationships. Then we’ve created a Lunar Spread using the phases of the moon to explore the creative process and projects that might need nurturing, and finally we’ve taken the good old ‘Celtic Cross’ spread which works so well for general readings. But we’ve suggested a different way of looking at it: as a Chalice and Wand spread which works with the central idea of DruidCraft: that there are two forces which when combined create life and movement.

At the back of the book you have a Further Reading & Resources section. Can you say a little about this?

Of course there are masses of books about the Tarot, and hundreds, probably thousands of decks. So what we’ve done is chosen books that are particularly illuminating if you are approaching Tarot from a Pagan perspective or from the position of wanting to understand it not as a fortune-telling device but as a profound psychological and spiritual tool.

Can you say a little about the Messages you have put in the book?

Each of the Majors, and each number of the Minors has a ‘message’ – a sort of inspirational or provocative phrase or two to get you thinking and to give you a feel for the energy of the card. These just ‘came’ to us as we worked on the deck. They are not meant to express the full meaning of any card, but to convey some of its importance and perhaps to work also with the Unconscious.

Finally, do you have a favourite card?

Stephanie: It’s very hard to say which is my favourite – I love the 5 of cups – I think the painting is stunning – the figure is so solitary, and the otter almost catching the salmon in the water. But perhaps my favourite card of all is The Wheel, which is often called the Wheel of Fortune in other decks.

Philip: My favourite card in this deck is the image of Death – not a corny old skeleton with a scythe on a horse, but a loving crone cradling a skull, which she is about to place in the cauldron of rebirth as dawn approaches on the horizon. And its message in the book reads: ‘The old and unnecessary wants to die. What passion! The new prepares to open like a rosebud at the dawn of a new day.’