"A hundred years I slept beneath a thorn Until the tree was root and branches of my thought, Until white petals blossomed in my crown."
Kathleen Raine, The Traveller

A Celebration of Spring

The hawthorn, once known simply as ‘May’, is naturally enough the tree most associated with this month in many parts of the British Isles. When we read of medieval knights and ladies riding out ‘a-maying’ on the first morning of May, this refers to the flowering hawthorn boughs they gathered to decorate the halls rather than the month itself. For on this day, according to the Old Style calendar that was in use until the 18th century, the woods and hedges were alight with its glistening white blossoms.

This and similar customs to welcome in the summer flourished in rural places until quite recently. In some villages, mayers would leave a hawthorn branch at every house, singing traditional songs as they went. The seventeenth-century English poet Robert Herrick wrote:

There’s not a budding boy or girl this day,
But is got up and gone to bring in May;
A deal of youth ere this is come
Back, with whitethorn laden home.

The young girls rose at dawn to bathe in dew gathered from hawthorn flowers to ensure their beauty in the coming year, as the old rhyme goes:

The fair maid who, the first of May,
Goes to the fields at break of day
And washes in dew from the hawthorn tree,
Will ever after handsome be.

For May was the month of courtship and love-making after the winter’s cold; and so the hawthorn is often found linked with love-making. In ancient Greece the wood was used for the marriage torch, and girls wore hawthorn crowns at weddings. One writer has even gone so far as to suggest that the ‘stale, sweet scent from the trimethylamine the flowers contain, makes them suggestive of sex.’ (Geoffrey Grigson: The Englishman’s Flora, Phoenix House, 1956)

The Hawthorn often stands at the threshold of the Otherworld. In the ballad of Thomas the Rhymer, the Scots poet is taken away by the Queen of Elfland as he sits beneath an ancient thorn known as the Eildon tree. In another old rhyme, the Ballad of Sir Cawline, a lady dares the hero to go to Eldridge Hill where a hawthorn grows, to await there the faery king.

A report of a fairy ride from 19th century Scotland illustrates how prevalent this tradition was years after these ballads were written: an old woman, sitting with a neighbour under a hawthorn tree one evening heard loud laughter and saw the fairies by their own unearthly light. She recounts that,

A beam of light was dancing owre them mair bonnie than moonshine: they were a wee wee folk wi’ green scarves on, but ane that rade foremost, and that ane was a good deal larger than the lave wi’ bonnie lang hair, bun’ about wi’ a strap whilk glinted like stars…..Marion and me was in a brade lea fiel’ where they came by us; a high hedge o’ haw trees keepit them frae gaun through Johnnie Corrie’s corn, but they lap a’ owre it like sparrows and gallopt into a green know beyont it.

In Ireland, too, hawthorns have always been highly respected as faery trees. They were often referred to as ‘gentle bushes’ after the custom of not naming faeries directly out of respect. Solitary thorns were known as the faeries’ Trysting Trees, and frequently grew on barrows and tumps or at crossroads, thought to be a favorite location of pagan altars.

Hawthorns often stand over holy wells, also traditional thresholds of the Otherworld, where pilgrims festoon them with ribbons, rags and other votive offerings. A sacred hawthorn hung over the St. Patrick’s Stone on an island in the River Shannon and filled its hollow with dew, which had great healing powers. St. Bridget’s Well in Cork also collected the dew from an ancient faery thorn above it. I myself can attest to the powers of the old thorn at St. Madron’s Well in Cornwall, on which my then husband-to-be and I hung two strips from an old bandanna: we both made a silent wish that came true when I accepted his proposal of marriage a few weeks later!

While the hawthorn was a propitious tree at Maytime, in other circumstances it was considered unlucky. Witches were supposed to make their brooms from it, and in some parts it was equated with the abhorred elder, as in the rhyme:

Hawthorn bloom and elder-flowers
Will fill a house with evil powers.

Dire consequences have traditionally attended those foolhardy enough to disturb a faery thorn, as many local tales recount. Sickness, death or financial loss could attend picking a leaf or plucking a switch, and the tree might even bleed or scream. Even hanging out your washing on a thorn was ill-advised, as it might cover up the faeries’ clothes already spread out there.

Earlier in this century, a construction firm ordered the felling of a faery thorn on a building site in Downpatrick, Ulster. The foreman had to do the deed himself, as all of his workers refused. When he dug up the root, hundreds of white mice – supposed to be the faeries themselves – ran out, and while the foreman was carting away the soil in a barrow, a nearby horse shied, crushing him against a wall and resulting in the loss of one of his legs.

Even as recently as 1982,workers in the De Lorean car plant in Northern Ireland claimed that one of the reasons the business had so many problems was because a faery thorn bush had been disturbed during the construction of the plant. The management took this so seriously that they actually had a similar bush brought in and planted with all due ceremony!

Even today many people will not allow the branches inside the house; for, as one might expect from its association with Beltane, a time when the two worlds meet, it is considered a tree sacred to the faeries, and thus to be regarded with fear at the least, respect at most.

The reference to the hawthorn providing protection from storms may relate to the ancient belief in the Classical world that it sprang from lightning. The most famous holy thorn is at Glastonbury, in south-west England, where it grows amid the ruins of the medieval abbey. According to legend, Joseph of Arimathea brought it from the Holy Land when he bore the Grail to England, and it blooms every Christmas to celebrate Christ’s birth. It is likely, however, that the Glastonbury monks attached Christian associations to the tree in an attempt to put an end to the hawthorn’s association with the pagan sexuality of spring festivals. Certainly, the thorn seems to have roused the ire of the Puritans who cut it down twice – first in the reign of Queen Elizabeth I, and later under Cromwell. One scion of this tree still grows on nearby Wirral Hill, which is almost certainly an ancient pagan site.

Christianity also played its part in preserving the veneration of the hawthorn. Because Christ was given a crown of thorns at his crucifixion, the tradition of the tree’s magical associations has continued in Christian legend. In the Middle Ages, Sir John Mandeville wrote:

Then was our Lord ylad into a Gardyn…and there the Jews scorned him, and maden him a Crowne of the Braunches of Albespyne, that is White Thorn, that grew in the same Gardyn, and setten yt on hys Heved…..And therefore hathe the White Thorn many Vertues. For he that berethe a Braunche on him thereoffe, no Thondre ne no maner of Tempest may dere (hurt)him; ne in the Hows that it is inne may no evylle Gost entre.

So no wonder a confusion of meanings attends the humble hawthorn in later times! While some believed witches rode on hawthorn brooms, others were placing sprigs of it above cottage and stable door to keep witches out. In some places, to sit beneath a hawthorn tree meant to meet with the denizens of the Otherworld; while in others the tree afforded protection from the same (‘Creep under the thorn,/It will save you from harm.’)! If you are lucky enough to lie under a hawthorn bush on Beltane eve, and inhale the musky scent of the five-petalled white blossoms, guarded by their dark spiky thorns, then you may discover its meaning for yourself.

On a Hawthorn Tree
Oh! come to see me, when the soft warm May
Bids all my boughs their gay embroidery
wear,
In my bright season’s transitory day,
While my young perfume loads the enamoured air.
Oh, come to see me, when the sky is blue,
And backs my spangles with an azure
ground.
While the thick ivy bosses clustering through,
See their dark tufts with silvery circlets
crowned.
Then be the Spring in all its pomp arrayed,
the lilac’s blossom, the laburnum’s blaze,
Nature hath reared beyond this Hawthorn glade
No fairer alter to her Maker’s praise.
George W.F. Howard
Earl of Carlisle 1802-1864 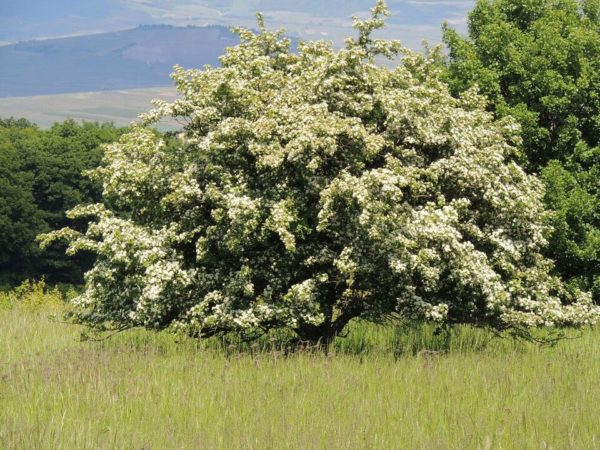 More About Beltane:
Beltane
Sacred Sex and The Goddess and God of Beltane
Beltane Pilgrimage
Beltane, St Teresa and the Greening
Beltane Solo Ritual No.1