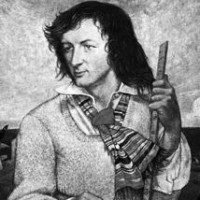 Educated at Eton and Trinity College, Cambridge, John wrote more than a dozen books and contributed for over a decade to The Oldie magazine.
Continuing in the great tradition of Aubrey and Stukeley, he captivated the readers of his books on the sacred landscape of Britain. In 1969, his View Over Atlantis became a cult classic, popularising the notion that Britain was criss-crossed with lines of magical earth-energy that our ancestors understood, but which we have forgotten.
Blending Alfred Watkins’ ideas about the ‘Old Straight Track’ with cabbalistic numerology, sacred geometry and theories drawn from the Chinese geomancy of Feng Shui, View Over Atlantis suggested that Stonehenge and the other great prehistoric monuments of the English landscape are laid out in accordance with sacred geometry to fulfil a magical purpose: bringing harmony to the land.
John had a great love of Druidry, writing: It is often said – usually by those who have not studied the subject – that the world-view and philosophy of the old Druids is lost beyond recall… [but] it is by no means impossible to regain in the present age the spirit of original Druid philosophy. It is essential indeed to do so; for a revival of the old Druidic way of thought, acknowledging the sanctity of the living earth and all its creatures, seems the only alternative to planetary dissolution. In 1992 he was ceremonially appointed Presider on London’s Primrose Hill at the Bicentennial celebrations of Iolo Morganwg’s first Eisteddfod in 1792.