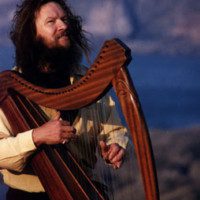 Myrdhin was born in Upper Brittany to a Cornish family, Myrdhin is one of the driving forces behind the rebirth of the Celtic harp in Brittany.

He plays solo or with the trio An Delen Dir both in France and abroad since the 1970s. He has received numerous awards and a Grammy nomination in 2000. He has played on many of the AfroCelt albums, and has written music inspired by the story of Taliesin. His website can be found below.