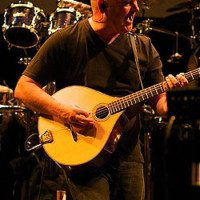 Simon is a musician, record-producer, and founder of the bands The Afro Celt Sound System and Imagined Village. Simon joined his first band, Scritti Pollitti, in the 1970s. Later he was a founding member of Working Week, which toured extensively worldwide, won many European awards, and headlined at the Montreux and Nice Jazz festivals.

He has always had a love of African music and started investigating African sounds in the early 80’s when he was also involved with organising some of the Rock Against Racism concerts. In 1991 Simon went to Senegal to produce 3 tracks on Baaba Maal’s Lam Toro album. This was a life changing experience, Simon felt the connection between African and Celtic music in Senegal, and on returning to the UK, he met up with Irish piper and whistle player, Davy Spillane, to explore these musical links. In 1992, Simon formed Stone Grove with singer Janette Sewell, the art work for the CD was by Jamie Reid, whom Simon had met through his interests in Druidry. Jamie Reid then went on to become a founding member and artist of the Afro Celt Sound System.
In 1995, The first Afro Celt Sound System album was released to great critical acclaim, and over the next 15 years there would be a further 6 albums released on Peter Gabriel’s Real World Records, being one of their top selling artists of all time. Two of the albums, Release and Further in Time were both Grammy award nominated. In 2007, Simon released the first Imagined Village album on Real World Records. This was an exploration into his English roots and what they mean today. This album was followed by more and extensive touring of the UK and Europe. After being invited to an Imagined Village gig in Poole via his Dorset bird watching group Simon was headhunted by Mark Constantine (founder of Lush Cosmetics) to work as the Lush musical director composing, directing and producing a variety of music, spa treatments and campaigns within the company. He has helped write and produce over 8 scores for their ground breaking internationally recognized spa treatments- all available as CDs and 3 currently in vinyl format. At the end of 2014 Simon directed the first Lush high definition film, The Experimenter that won a BAFTA ASFF (Aesthetic Short Film Festival) award in November 2015. In that same year Simon got together with N’Faly Kouyate and Johnny Kalsi to make the new Afro Celt Sound System album, The Source, that was released in April 2016 to celebrate the 20th anniversary of the band. Website can be found below. (Photo credit Mark A.Bennett).