Within a few short miles we came upon the Neolithic treasures we were searching for.  Starting with a great mound called Maes Howe; we simply followed signs and drove right up to three thousand-year-old stone circles, mounds, and sighting stones…

In October of 2007 my family and a group of friends took a two-week vacation visiting various destinations in Scotland.  To save money we stayed at self catering B&Bs where we could cook simple food and keep our costs down.  We rented a minibus and we had to learn how to drive on the wrong side of the road, in the wrong side of the vehicle, shifting with the wrong hand, with the pedals being the right way.  As scary as it was for the driver, we found out that being the front seat passenger was the most terrifying.  We stayed in Glasgow for a few days and then went to Edinburgh, where we visited my Bardic tutor. We spent a day at Sterling on our way north through the Highlands.  One of our hosts suggested we stop at the Hermitage just south of Inverness to see the tallest tree in the UK. The tallest tree, a Scots pine, is taller than the tower at Durham Cathedral. All the trees in the preserve were huge and old and magnificent. A waterfall and lovely stone path made it one of the highlights of our trip.

Driving north through the Highlands, we arrived at the North Sea where we took a ferry to the isle of Orkney.  We stayed in Kirkwall, which is the main city, and our adventure began with an impromptu tour of the ancient Masonic Lodge. We were shown the building and a small museum and saw the controversial Kirkwall scroll, which may link the Masonic fraternity with the suppressed Knights Templar.  Driving out of the city, the landscape quickly became rural with mostly fields stretching out before us, dotted with fishing villages and hamlets. Within a few short miles we came upon the Neolithic treasures we were searching for.  Starting with a great mound called Maes Howe; we simply followed signs and drove right up to three thousand-year-old stone circles, mounds, and sighting stones.  Maes Howe was the only site that required guides and was closed when we got there, so we moved on to the nearby Stones of Stenness. 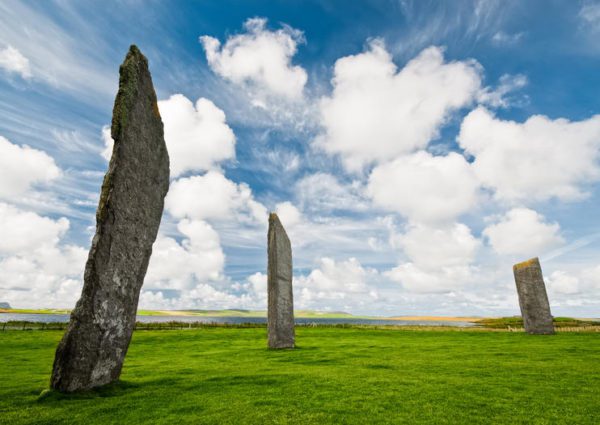 A small circle of stones, the Stones of Stenness were right off the side of the road, with a small parking lot with the chain-link fence around it and a swinging gate, and no lock.  Walking in, you could feel the power of time slipping away.  These stones were so tall and huge and had been standing there for thousands of years, passively and simply showing relationship with the sun.  In the center were two smaller sighting stones. Some of the stones in the outer ring were missing and yet the presence was majestic and awe inspiring. Near the end of our visit a storm blew in fast, bringing cold rain that came at us sideways. We stood behind the huge vertical stones, waiting out the storm, and amazingly stayed dry as the rain was coming horizontally. As quickly as it came, the weather turned calm and sunny and we were treated to all kinds of rainbows, including a double rainbow.  From there, we drove on a one lane country road and there were standing stones in fields, beside the road, in people’s yards, they were everywhere! 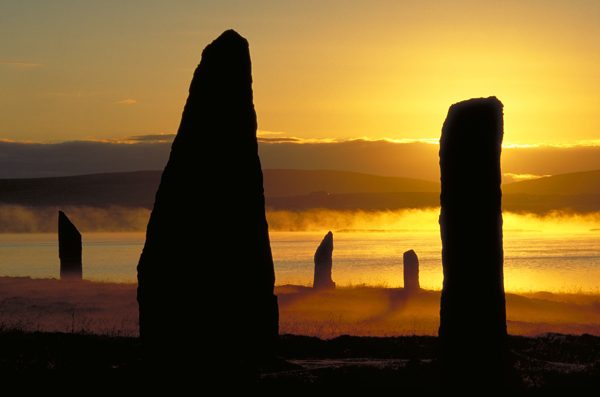 The next site we visited was the Ring of Brodgar, considered one of the largest stone circles in the world.  Again, there were no guards, no gates, no locks, just you, history, and your conscience as to how you want to impact the site. The middle of the circle, as well as the whole field around it, was thick with heather.  A huge stone called the Comet Stone, and two huge mounds were also near the Ring of Brodgar.  Some of the stones had fallen, some were cracked, some were missing, one for sure had been struck by lightning, but 36 of them stood in a perfect circle.  They were gigantic, powerful, and yet magically subtle. 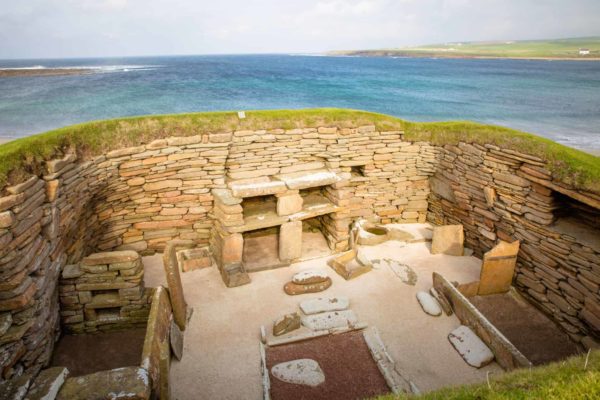 Much farther up the road we came to the Neolithic village of Skara Brey.  Before the Temple of Solomon, before the Great Wall of China, even before the Pyramids of Giza, Skara Brey was an organized village where people live and worked in harmony with the land, sea and sky.  There was a feeling there of truly seeing the oldest and most northern of my Western European ancestors.  I don’t know if these were Picts or Scots, Neanderthal or Cro-Magnon, but I know they were here living the cycles of the seasons, of the ocean, and of their lives.  By the time we got back, Maes Howe was opened and we took a guided tour.  The entrance to this mound was a long, low tunnel.  By bending at the waist and walking slowly we were able to go into the heart of the mound.  There is a great chamber in the middle, the four corners were actually standing stones like the ones at Stenness, and then stones had been piled around it using the corbelling method. Three chambers were in the three walls opposite the entrance. 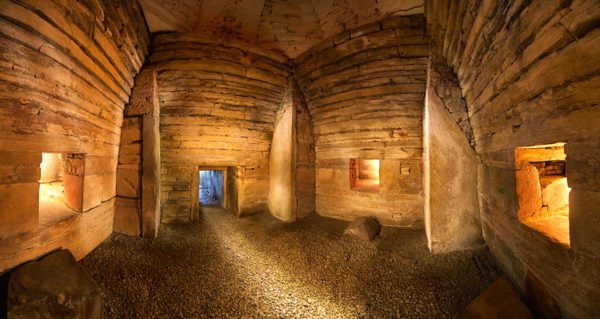 On the day of the Winter Solstice, the sun shines through the long entryway and illumines the back wall of the chamber. Historic Scotland, who preserves and manages the site, sets up a web cam each year for the days leading up to, and after, the Winter Solstice. The camera can be accessed through their web-site to chart the Sun’s progress towards the back wall and center of the chamber. There are many speculations as to whether it was a burial chamber, or dwelling, or ceremonial place of worship and ritual.  Coming out of Maes Howe, we again had to walk bowed at the hips and as I turned around and watched people leaving it looked like the great belly of a pregnant woman and the people were like children coming out of her, one after the other.  It came to me that when we come out of our mothers; we were humble and helpless, bowed and reverential towards life.  I have to assume the same attitude to go back into the womb of the Great Mother.  Standing at Maes Howe, our guide pointed off in one direction and we could see lined up perfectly from the mound, the Stones of Stenness, some single stones in various fields, the Watchstone, and the Ring of Brodgar (which still looked huge even miles away), all in a straight line.  Our guide told us that not only do all the sites line up, but if we looked in the distance we would see an opening between two peaks in the far off hills.  She told us that they are the original sighting stones and that the sun shines between these two hills in a direct line through the various rings and stones to Maes Howe, and that at the Solstice, the sun rolls down from the mountain, through the various circles and sites to the mound. 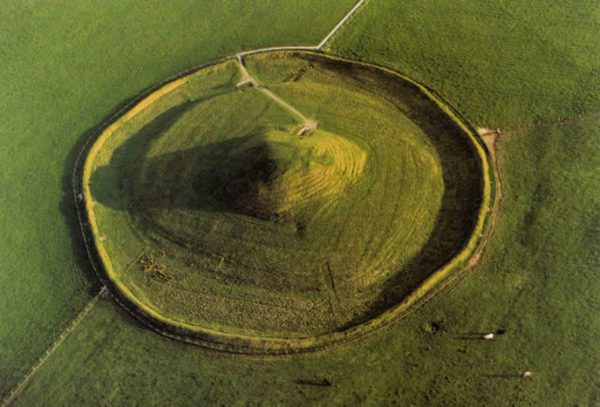 At most of the sites I found myself intuitively locating the West, entering the stone circles from that point and walking clockwise or sun wise to the East.  Sometimes I stood before each stone, other times I stood in between each stone, and each circle and place had many feelings and insights in store for me.  As a Bard, I was trying to get in touch with my own cycles of the seasons, the elements, and my life, through my study of the Bardic Grade.  It was amazing to stand in circles erected by people who were living in harmony with their own cycles, and the cycles of the seasons, of the Great Mother, 3000 years ago.  I felt that I was a person who for years has been searching for my inner cycles. I am living in a time when the Seasons are ignored and Mother Nature is under attack. By taking the wisdom of the ancients and applying it to the present, I can get in tune with my inner and outer cycles. There was so much learning and healing done just by being in those circles. The Orkney adventure is calling you… 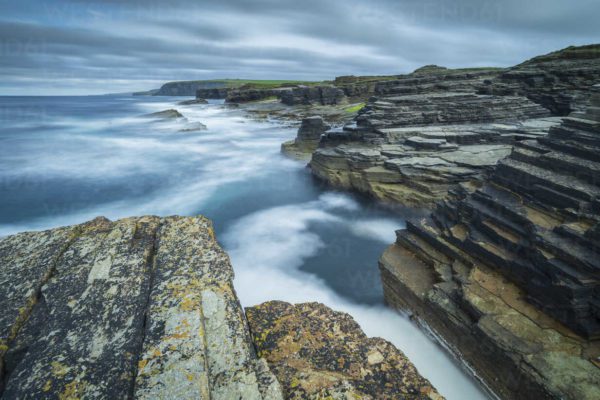