In Druidry, often the  ancestors are honoured from three different spheres that can overlap each other. These spheres are the ancestors of blood, who share our bloodlines; the ancestors of place, with whom we now share our physical space; and ancestors of tradition, those who have practiced in the same vein as we do… 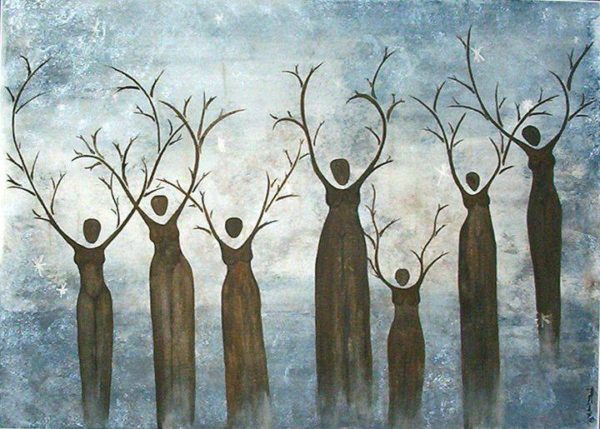 In Druidry, often the  ancestors are honoured from three different spheres that can overlap each other. These spheres are the ancestors of blood, who share our bloodlines; the ancestors of place, with whom we now share our physical space; and ancestors of tradition, those who have practiced in the same vein as we do.

Often, the ancestors of tradition can become relegated to the back-burner; most often when people think of ancestors it is those of their family lines that they think of. Also, ancestors of place can take precedence in a setting where their songs are still widely sung and heard in the deepening twilight. The ancestors of tradition, however, will always hold a special place in our hearts if we make room for them.

Some people may have inspired us on our spiritual and religious path. They may not even have been of the same spirituality or religion, but share ideals held in common. Oftentimes, these can be seen as the more prominent people of the traditions, those who have garnered a supposed “higher” status due to their position, their accomplishments and their deeds. The cult of celebrity is rampant even among us pagans. Some are widely known not only for their virtue, but because of who they are – the Dalai Lama for example. Others have been known by the virtue of their deeds (not to say the Dalai Lama isn’t worthy) and an example that springs to mind is Mother Theresa, or Dr Martin Luther King Jr. All these people can be ancestors of tradition if we hold the same beliefs, morals and attitudes as they do, even though they are not necessarily, or essentially pagan (whatever that may mean!).

Celebrity pagans abound, now due to social media, the increase of pagan books being published and television and radio appearances.  These people to whom the media seek out for whatever reason can be seen as an ancestor of tradition. We may not like what they are saying or representing, but they have become the spokespeople that others are listening to. This can be disheartening when you don’t agree with their principles or the execution of shared principles. It can also result in elation when there is agreement – yes, someone “important” is saying what I’ve been saying all along, what needs to be said, what needs to be done, etc. Whether we choose to honour them or not is our decision.

Just because someone has written a book, or ten books, or appeared on television or the radio, doesn’t make them any more noteworthy than the pagan who quietly picks up litter by the roadside and sings to the sunset in her organic garden.  It is the cult of celebrity that has changed our perceptions. Our ancestors of tradition incorporate all ancestors of tradition, from the inspiration gained from the wailing women in black on Anglesey who stood alongside the others to oppose the Romans, to the RSPB volunteer who speaks out against those who wish to harm birds of prey out of fear and ignorance. We may take inspiration from acclaimed authors whose words strike a chord in our hearts – equally, we may take inspiration from the pagan family in the next town over who host seasonal celebrations in their backyard for all in the community.

Honour should not be bestowed simply because of celebrity. Equally, honour should be bestowed from within as well as from without. In honouring your very own self as part of a spiritual or religious tradition, you also honour those in whose footsteps you may follow, whose words we listen for on the dawn’s solar wind. The ancestors of tradition are a vital part of my own Druidry, and consist of people from all over the world who share the same worldview as I do. Some of them are considered celebrities, some no one has ever heard of. What matters most is that in honouring them I am also honouring the tradition itself, its values and what it means to be a pagan. It is all too easily forgotten.

P.S. I would like to take this opportunity to thank the people of Melange Magique, a pagan supply store in Montreal who have recently had to close down. That shop started me on my pagan path, and I will always be grateful, as I’m sure thousands of other pagans are for what they achieved these last few decades.