The Beltane celebrations of the Old Oss begin at midnight on 30th April, May Eve. We rolled up to the Golden Lion pub, where the Old Oss is ‘stabled’ for the singing of the ‘Night Song’. We joined the huge crowd and managed to squeeze ourselves near the front. Everyone stands outside the pub and… 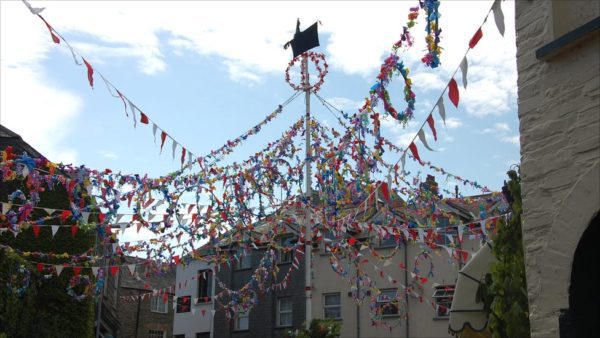 08.00 … Wednesday morning, 30th April, on the trek from Hereford to Padstow. We stopped for lunch at a 14th century pub – The George at Hatherleigh – which was a monastery before it was a pub. From there we took across country to Holsworthy and Bude, on the North Cornish coast, then turned down to Boscastle which has one of the best Museums of Witchcraft in the world – you can find them on the net. Thence to Tintagel, via Nectan’s Kieve and Rocky Valley (where the two Celtic Troytowns are) and finally to our B&B just outside Padstow. 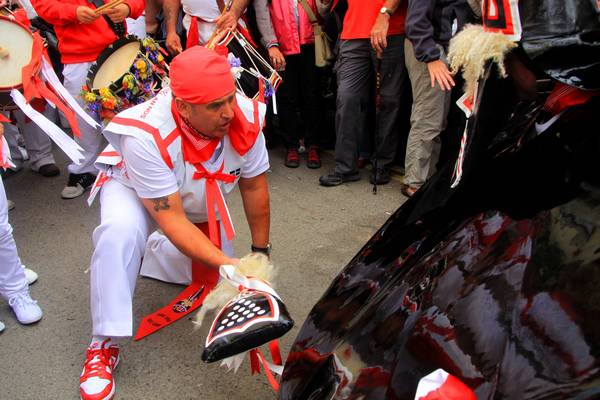 The Beltane celebrations of the Old Oss begin at midnight on 30th April, May Eve. We rolled up to the Golden Lion pub, where the Old Oss is ‘stabled’ for the singing of the ‘Night Song’. We joined the huge crowd and managed to squeeze ourselves near the front. Everyone stands outside the pub and serenades the Landlord and his household, who come to the upstairs windows to acknowledge us.

Now … this whole celebration is NOT done for the tourists! Oh yes, lots of tourists come – including us – but the celebrations are done by the townsfolk for the townsfolk. We tourists are guests and should be on our best behaviour. Just before the singing, a woman calls out to celebrate all the loved ones who have passed on since the last Beltane. It was especially poignant this year as, as well as the usual passings, a Padstow man was lost in Iraq. Some Clot, large tourist-type bloke, decided to shout ‘You’re really milking it!’. He was told, forcibly, to shut up. Fortunately he did, else he’d likely have been ‘taken down’, and possibly tossed into the harbour, which I’ve seen done on a previous visit! The atmosphere was electric. We made various noises to show that we were on the side of the townsfolk as they knew we were ‘strangers’ (the Cornish call strangers ‘Emmetts, in Devon the word is ‘Grockle’). The singing began and we sang along; we knew the words and this was noted by the townsfolk near us. Several now smiled to us, talked to us, even protected me (cripple on me sticks!) from being squashed or falling in the press of people. 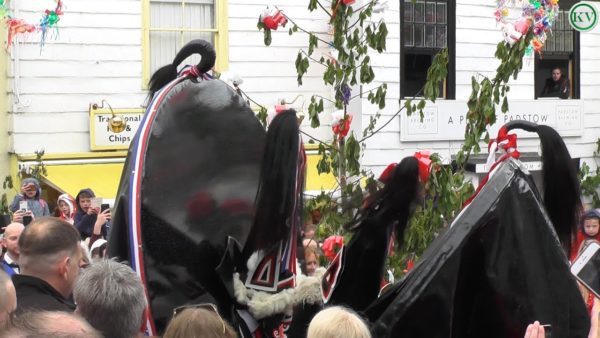 After the singing, one of the men started talking to us, asking where we came from, so I told him my home village, Chittlehampton. He knew it and asked me about people in Barnstaple, the local town. We got into quite a conversation about folk singing and he pointed out Martin Carthy, from the original Fairport Convention. Now, my first husband and I used to live in Birmingham and go to a pub called The Bull, in Moseley. Martin Carthy and Dave Swarbrick used to go there as their local and Sunday lunchtimes became a session. It was wonderful to see him again after 30 years – and strange, otherworldly, at such a time and place … Anyway, this man took a shine to us and invited us to come to a pub outside of Padstow (and a mile up the road from our B&B) on May Day night, after the Oss was put to bed, for ‘a sing’ … more of this later!
On May Day we arrived again at the Golden Lion and waited for the Old Oss to come out at 11am. This is the original Oss. His colours are Black, White and Red, the Celtic colours. Again, we got right up to the front. And out he came – there’s absolutely nothing like it! On the ‘ordinary’ front this is a man dancing a huge black-covered wheel with a long black skirt, wearing a tall, black, witch-pointed hat with a red and white face on it. On the front side of the wheel is a caricature horse’s head with a real black horse-hair mane, on the opposite side is his black horse-hair tail. But it isn’t. It really is a Fabulous Beast. And it’s a man in costume. Not either/or but  and/and. And so it is to the townsfolk too.

The Oss has a Teaser. This is a woman, or a man, who carries a blown-up, painted bladder which they wave and dance with the Oss, leading him, keeping just enough of order on his chaos so he doesn’t hurt himself or others. But he’s WILD, and I mean wild! He leaps and capers and rushes the crowd, and grabs women in under his skirt, gooses and makes love to them – yes, really! – goes into the houses, pokes the horse-head through windows and doors, kisses men and women. And the crowd tease him back. It’s lucky to touch him. Even luckier if he knocks you by accident – he got me on the jaw, so I feel extra good about that! No bruise either, and it was a hard knock, and I bruise easily. He’s led by the musicians, side-drums, accordions and squeeze-boxes. And we sing. In the day song there’s a point where the tune changes to a very solemn one. The Teaser puts the bladder on the Oss and he bows down to the ground, dies, while we all sing ‘Oh where is St George’ … etc. The slow bit ends, there’s a moment’s silence, then the drum beats out again, we all shout ‘Oss! Oss! Wee! Oss!’. He leaps up, cavorting, and we all take up the singing again. 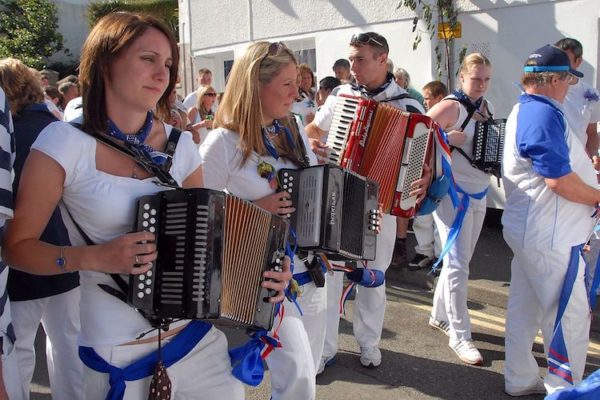 The Old Oss begins his procession from the Golden Lion down by the harbour and goes up the hill. The men dancing him change about every 100 yards, it’s very hard work! And the Teasers change regularly too. They’re mostly women – so the roles are reversed. Does this remind you of various ‘Fith Fath’, shape-shifter songs where the goddess is testing the god to see if he’s up to being her partner? Anyway, we followed up and up until we came to the old castle mound. This tump is probably 4000 years old and right next to it is the lord of the manor’s house, Prideaux Place. The whole cavalcade goes into the garden and dances up to the front door. The butler opens the door -all the family and servants are hanging out the windows – and the lady of the house comes out and dances the Oss. And very good she was too. The Oss gets a drink as well – and he bloody needs it! Then we all leave, singing and led by the Oss, to go back down to the harbour by a different route, so we do a circle. When we get back to the Golden Lion the Oss goes to bed for the afternoon. He gets up and dances again later and is finally ‘put to bed’ in the early evening.

There are two Osses nowadays. The new one, the Blue Ribbon Oss, is a ‘temperance oss’ set up in the early 20th century to counteract the drunkenness  of the Old Oss. Us not being temperance folk, we felt our loyalties were with the Old Oss !!!! The two finally meet under the May Pole before both go back to bed.
The evening … Diana and I arrived at the pub about 9pm. It was stuffed full of the Old Oss supporters and pretty soon the singing began. It was magic! They all of them had very good voices and some were brilliant. It was one of the best sings we’ve been to. Everyone joins in the choruses while various of the Elders lead the songs. I knew most of them from my old folk singing days but there were some new ones, and some Padstow local ones as well. One was a celebration of the Green Man which I’d not heard before. Padstow is a fishing port so there were a good few shanties too. As we came around to midnight again the melodeons (squeeze-boxes) came out and the Oss’s song was begun for the last time. This time we all sang the final verse …

Now fare you well and bid you all good cheer, For summer is acome unto day,
We call no more unto your house before another year In the merry morning of May.
And so our 24 hour Beltane Journey ended, at midnight on May Day. 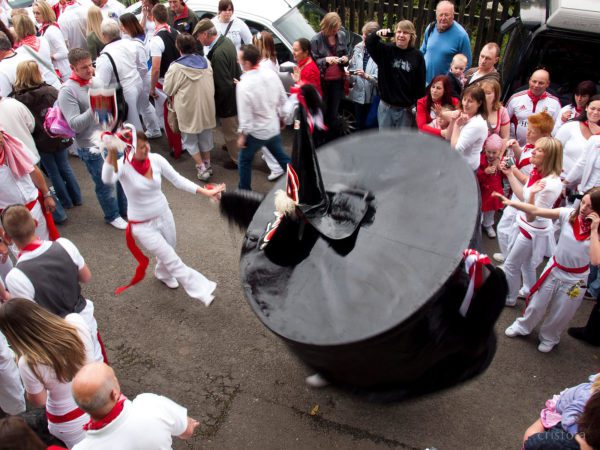 Sacred Sex and The Goddess and God of Beltane
Hawthorn Tree

Beltane, St Teresa and the Greening
Solo Beltane Ritual No.1