Blood and Mistletoe ~ The History of the Druids in Britain

by Professor Ronald Hutton ~ This long-awaited book is a tour de force. Interpretations of Druidry through the ages, treated to scrupulous scholarly dissection, in a masterly fashion. The first chapter, the raw material, should be required reading for all who have ever given credence to the impeccability of original sources…but given their suspect nature,… 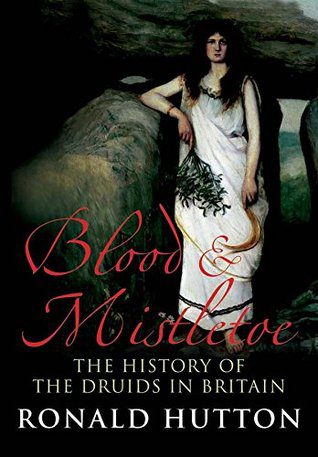 This long-awaited book is a tour de force. Interpretations of Druidry through the ages, treated to scrupulous scholarly dissection, in a masterly fashion. The first chapter, the raw material, should be required reading for all who have ever given credence to the impeccability of original sources…but given their suspect nature, how has Ronald Hutton extracted the truth from any, and given coherence to this book?

From Caesar, a truly Machiavellian author, onwards, a succession of agenda-laden activists, scholars and authors have fashioned an image of druids for the popular imagination to suit the political and cultural points they are making. By examining all these written sources in the context of  the social, economic, political standpoint of the various authors, a magnificent tapestry is gradually woven of English history and the men who have affected it; with. always, the misty figure of the druid just glimpsed to colour the narrative. This book is fascinating. It is huge. It is really beyond the scope of a short review to convey the breadth and sweep of the narrative.

In the end analysis, all that can be held onto is that the word ‘druid’ has, at significant times in our history, rung with such resonance that men have annexed it, with all its associations,  to manipulate or to stir others to their causes. And so through the chapters we run – through the ages, and the gamut of emotional responses to the term druid; from  disgust and vilification for a blood-soaked and savage priesthood to awe and wonder at the disseminators of the mystical wisdom of nature, pausing in admiration for them as radical freedom fighters along the way.

The scope is given in the tantalising chapter headings: The raw material; The Druids take shape; the Druids take over; the Druids take flesh; Iolo Morganwg; Interlude: a pair of Williams; the Apogee of the English Druids; Iolo’s children; The Downfall of the Druids; Druidic afterglow; The Universal Bond; Druids and archaeologists; conclusion. And, along the way, the Hutton style, ensures that the reader is engaged and intrigued by his obvious delight in the minutia of his source material and vivid descriptive capacity.

Which poet vilified the druids for, amongst other things, halitosis? Which seminal figure was characterised by ‘truculent radicalism?’ Whose companions ‘strenuously ruminated’? What place does unlikely Dudley hold in Druidry’s history, and which Order opened a ‘Druid school’ before being ridiculed with an expose of a ritual involving Sulphur and groans to signify hell and an arch druid with a battle axe threatening death to the candidate? Which poet beloved of modern druids actually associated our spiritual forefathers with ‘howling, wailing, chaos, weeping, torture and bloodshed’? These examples are not intended to  tease, but to give a sense in a short review of the journey of adventure one embarks upon with this book.

The matter is dense, the scholarship impeccable, but the effect of Hutton’s light touch and engaging style is to draw the reader through a series of druidically-inspired tableaux exposing the manners and mores of bygone times. But be warned; it is best enjoyed in short bursts. This is not English ale, but a fine liqueur, to be savoured and enjoyed, with a respect for the artistry that went into its composition and made it so palatable to the reader.

The truth about the druids, as Prof Hutton regularly points out, will never be known. That they have been the raw material of every social and political dreamer since the advent of written history is the basis of this book. ‘In the last analysis… this book is about neither archaeology nor druidry, but about the British, and the way in which they have seen themselves, their island, their species and their world.’

And a great book it makes. My advice is, buy it now.