At the Sacred Centre, in the Grove of all Worlds, He sits with legs crossed beneath an ancient Oak. Entranced, connecting the three worlds Earth, Sea, and Sky, and the worlds behind the worlds, the god and the Great Tree are One, His immense limbs widespread, stretching into distant sky and starry space. Cernnunos Sleeps (2)
The Old God sleeps
down in the dark, moist,
odorous underfoot,
Waiting for us
To put down our roots.

At the Sacred Centre, in the Grove of all Worlds, He sits with legs crossed beneath an ancient Oak. Entranced, connecting the three worlds Earth, Sea, and Sky, and the worlds behind the worlds, the god and the Great Tree are One, His immense limbs widespread, stretching into distant sky and starry space.
His massive trunk, spine of the Middleworld, is the heart of the Ancient Forest around which all Life, all worlds turn; His limitless root web growing deep into secret earth and Underworld; above him the great turning circles of Sun, Moon, and Stars. All around Him subtle movements of the leaves in melodious, singing air; everywhere the pulsing, gleaming Green awash in drifts of gold and shimmering mist; beneath Him soft moss creeping over the dark, deep, moist of spawning earth. At His feet is the great Cauldron from which the Five Rivers Flow.

Through the forest stillness they come, whispering wings and secret glide, rustling leaves, and silent step, the first Ancestors, the Oldest Animals, to gather around Him: Blackbird, Keeper of the Gate; Stag of Seven Tines, Master of Time; Ancient Owl, Crone of the Night; Eagle, Lord of the Air, Eye of the Sun; and Salmon, Oldest of the Old, Wisest of the Wise leaping from the juncture of the Five Springs. He welcomes them and blesses them, and they honour Him, Cernnunos of the nut brown skin and lustrous curling hair; the god whose eyes flash star-fire, whose flesh is a reservoir of ancient waters, His cells alive with Mystery, original primeval essence. Naked, phallus erect, He wears a crown of antlers limned in green fire and twined with ivy. In his right hand the Torq of gold, testament of his nobility and his sacred pledge; in his left hand the horned serpent symbol of his sexual power sacred to the Goddess. Cernnunos in His Ancient Forest, His Sacred Temple, His Holy Grove, Cernnunos and His children dream the Worlds. 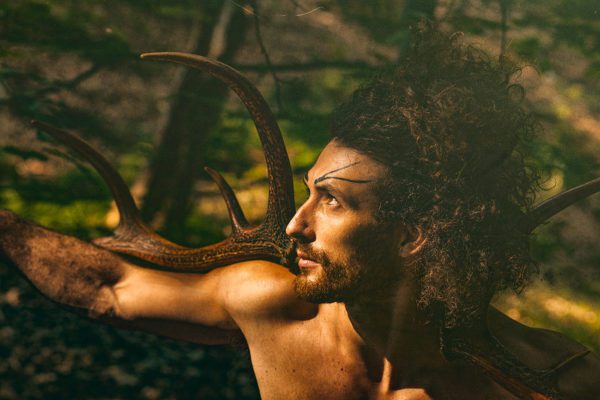 Cernnunos, a nature and fertility god, has appeared in a multitude of forms and made himself known by many names to nearly every culture throughout time. He is perhaps best known to us now in his Celtic aspects of the untamed Horned God of the Animals and the leaf-covered Green Man, Guardian of the Green World, but He is much older. Cernnunos worked his magic when the first humans were becoming. Our prehistoric ancestors knew him as a shape-shifting, shamanic god of the Hunt. He is painted in caves and carved everywhere, on cliffs, stones, even in the Earth Herself. Humans sought to commune with Him and receive his power and that of his animal children by dressing themselves in skins and skulls, adorning themselves with feathers and bones, by dancing His dance. Yet He is older still. In the time of the dinosaurs, the great swamps and subtropical forests of cycads, seed ferns and conifers, and later in the time of the deciduous plants and flowers, when the pollinators came and the first tiny mammals were creeping up from beneath the ground, Cernnunos was the difference and diversity of life, the frenzy and ferment of evolution. But, He is much older still. He is oldest of the Ancient Ones, first born of the Goddess. At the time of First Earth, Cernnunos grew in the womb of the All Mother, Anu, waiting to be born, to come forth to initiate the everlasting, unbroken Circle of Life.

The Many Faces & Natures Of Cernnunos

Cernnunos, as The Horned God, Lord of the Animals is portrayed as human or half human with an antler crown. Though he wears a human face his energy and his concerns are non-human. He is protector of animals and it is Cernnunos who is the law-sayer of hunting and harvest. While He is recognized most often through his connection to animals and our own deeply buried, dimly recalled, instinctual animal natures, Cernnunos is also a tree, forest, and vegetation god in his foliate aspect of The Green Man, Guardian of the Green World. His branching antlers symbolize the spreading treetops of the forest as well as his animal nature. As Master of the Sacrificial Hunt, His is the life that is given in service of new life. His wisdom is that the old must pass away to make way for the new.

In his Underworld aspect Cernnunos is The Dark Man, the god who dwells in the House Beneath the Hill, the Underworld. He is the one who comforts and sings the souls of the dead to their rest in the Summerlands of the Otherworld. Cernnunos, as Master of the Wild Hunt, who pursues the souls of evil doers, is not associated with a biblical or even modern morality, but with the protection and continuance of the Land and Nature and the spirits that dwell therein. 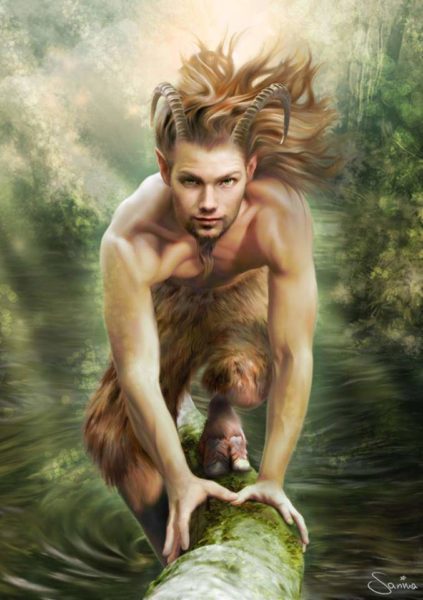 Pan, lusty Satyr god of the Greeks is another aspect of the Horned God. ‘Pan is a proud celebration of the liberating power of male erotic energy in its purest and most beautiful form.’ (5) He is portrayed as playful and cunning, but He also has a darker, dangerous nature. The panic or terror often associated with Pan is not related to human violence, but to the Life and Death of the natural world. In this form he is called the “All Devourer.” However, Pan, as Protector of the Wilderness and as a god prone to fits of madness and violence, can induce panic or wild fear in those who threaten his domain.

Cernnunos appears again in Elizabethan England, and is mentioned by Shakespeare, as Herne the Hunter, the demon and guardian of Windsor Forest, the Royal Wood. In this aspect it is said that he appears as Guardian of the Realm during times of National emergency and crisis. In modern times he is often called the God of the Witches and embodies uncorrupted masculine energy. A masculine energy that is fully-developed and in balance with the natural world

Cernnunos & The Sacred Wheel Of The Year

We celebrate and honour Cernnunos as the Green Man in spring and summer, the light half of the year and as the Dark One or the Dark God in autumn and winter, the dark half of the year. He appears in spring as the young Son, child of the Goddess, embodiment of the budding, growing, greening world. In summer He is the Green Man, vibrant, pulsing with life essence, the consort of the Green Lady Goddess. It is in autumn, the dying time, that perhaps we see the Horned God most clearly. He is the sacrificed one, who, wounded unto death begins his journey to the Underworld, returning to the Earth from which he was born and where the seeds of light released from his decaying body will quicken Her womb with a new Sun once again. 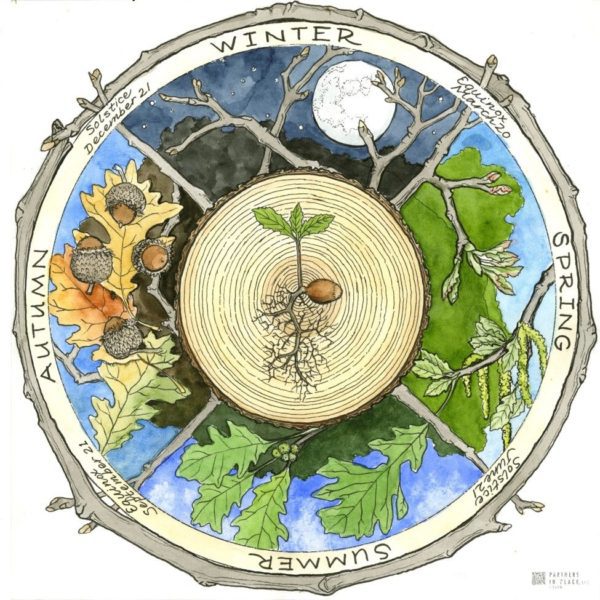 The path to Cernnunos is both through the natural world: seeking out the wild places and a deep understanding of the processes of growth, bounty, decay, rest, and rebirth, and through Otherworld journeys to the Middleworld forest of which he is guardian. One may experience this both actually and symbolically by following the path that disappears over the horizon into the distance and moves away from the ‘civilized’ world and into the heart of the Wild Wood. Often experienced as traveling away from the centre to the perimeter, this is in actuality a return to the Centre. When the seeker reaches the god’s forest the track ends, and her/his pathways are found by other means. After entering the Wildwood the seeker cannot be followed, nor can s/he follow another. Whatever pathways are discovered disappear in passing, and the Wood is trackless once again, for each one’s way is different. In the Forest of Cernnunos there is a stillness, an otherworldly feeling, as if one has passed out of time. Here the mind is not supreme. It is instinct, the innate wisdom of the body that guides us to Him. 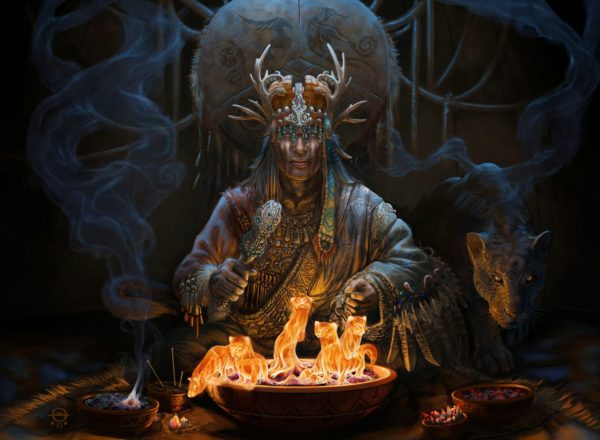 The way of Cernnunos is the way of the shaman or any person who truly seeks Communion with the Land. Yet, one cannot speak of Cernnunos without speaking of Anu or Don, the All Mother who gave Him birth. The way of Cernnunos is through the One. Like Her, Cernnunos is a Being or Power that existed before time and before the gods, the Shining Ones. Together they are First Mother and First Father, All Mother and All Father who brought the gods into being. Limitless and everlasting His energy permeates Her matter through every aspect of life to the sub-atomic. As Lord of the Dance He is present in the billions and billions of infinitely small movements that make up the seemingly chaotic Dance of Life, the Dance of Making and Unmaking. He is truly the Life that never, never dies, for even as nothingness he is self-originating. He is triple as She is triple. He is Cernnunos: Father, Son, and Wild Spirit. 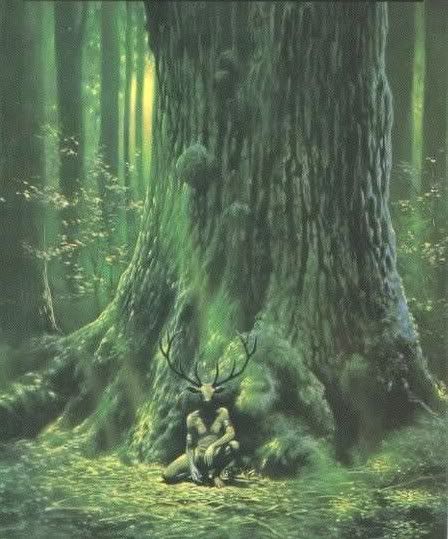 AUTHOR’S NOTES
(1) Cernnunos is the god’s Gaulish name. He is known by and associated with many others.
(2) The poem Cernnunos Sleeps is by C. Hue Bumgarner-Kirby. The poem appears with the author’s original painting of the same name in a card presentation from Bridge Building Images. Bridge Building Images offers beautiful Celtic and Native American spiritual images.
(3) This image is derived from a carving on the Gunderstrup Cauldron, as well as other sources, however, I would like to note that Celtic scholar John Matthews in his book The Celtic Shaman states that he believes the image on the Gunderstrup cauldron to be that of a Celtic shaman and not the god Cernnunos.
(4 ) No one knows how ancient the god or energy called Cernnunos might be. Based on my studies and experiences, I offer here my own theory of the god’s origins.
(5 ) Zell, Morning Glory. ‘Pan’
(6) Words and music by Ivo Dominguez, Jr. 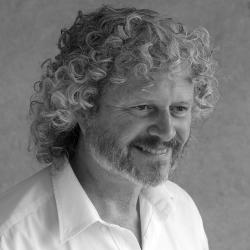