How can tarot possibly relate to Druid practice? Isn’t tarot the end-of-the-pier fortune telling for the gullible? Sadly, it can be but cut through the veneer of tall, dark, handsome strangers and you find an amazing way of connecting to spirit, your higher self, the ancestors. Tarot is endlessly flexible… 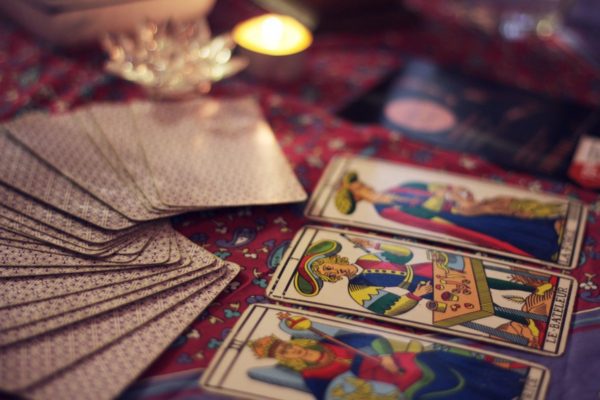 How can tarot possibly relate to Druid practice? Isn’t tarot the end-of-the-pier fortune telling for the gullible?

Sadly, it can be but cut through the veneer of tall, dark, handsome strangers and you find an amazing way of connecting to spirit, your higher self, the ancestors. Tarot is endlessly flexible.

From the early twentieth century Rider-Waite through to modern decks with amazing artwork like the Druid Craft deck, the story of tarot is that life changes, we are all on The Fool’s Journey. Anna-Marie Ferguson’s Arthurian Tarot takes The Knights of the Round Table and the Quest for the Grail and superimposes them on to the basic tarot format of the Minor Arcana, the playing cards we’re all familiar with and the Major cards of the Journey. In doing so she loses the Christian aspects that make tarot so tricky for pagans.

Death is no longer the terrifying grim reaper, claiming the life of everyone from bishops to children. Transformed to The Wild Hunt of Gwyn ap Nudd who helps the souls of the departed to the next world, Death gives us change, the ending of one chapter of our lives and the beginning of another.
In The Fool’s Journey Death is card number thirteen, which in numerology gives us the number four (1 +3 = 4), the number of the hag, of Morrigan. Astrologically related to Scorpio and Samhain, Death prepares us for a new beginning. It’s the Celtic New Year, the ending of one cycle and the beginning of another. It’s time to cut ties, let go, begin again. 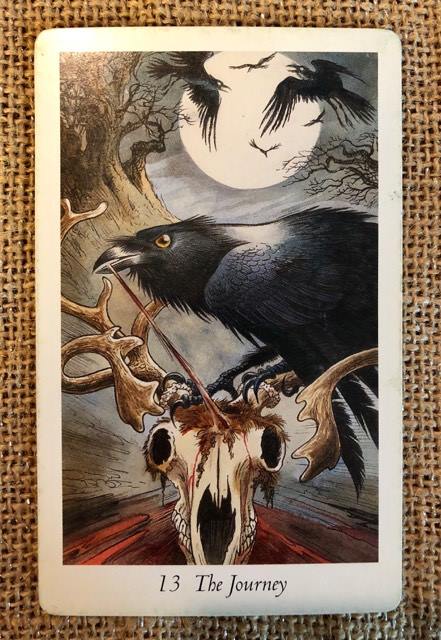 That message is reinforced by The Tower. In traditional decks this is the Biblical Tower of Babel, collapsing due to God’s wrath. In Arthurian Tarot it becomes Vortigen’s Tower, the symbol of one man’s ego and his attempt to control those around him. It is people, not God, who smite the land, who build prisons for themselves and for others. The collapsing tower, as Ferguson so beautifully expresses it, is ‘…the futility of trying to hide from inevitable change…’ 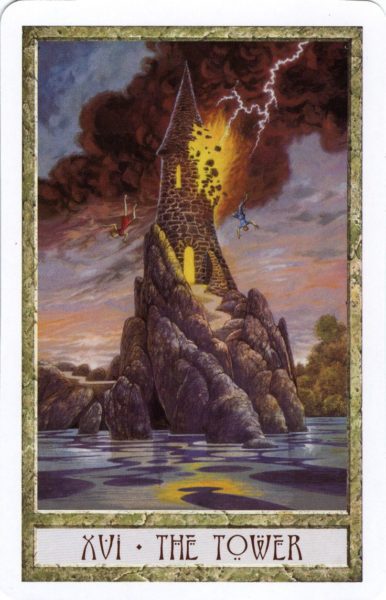 The Moon, the mercurial shape shifter, usually expressed as the balance between light and dark, the domestic dog and the wild wolf, becomes Morgan le Fey, the embodiment of Morrigan, the mortal sister of Arthur but with Fairy blood running through her soul. Morgan’s message is about the balance between reality and illusion, between true psychic development which comes from the heart and the parlour game approach to divination. The moon distorts reality. What is it about your own life that you’re not seeing clearly? Is it time to link with the dark side of your soul, the Morgan who takes the battle-wounded Arthur to Avalon, accepting that we all have a need to accept death, to tend the dying, to help the bereaved? Equally, is it time to cast off illusion and embrace the light of the full moon and face the harsh reality of the material world? 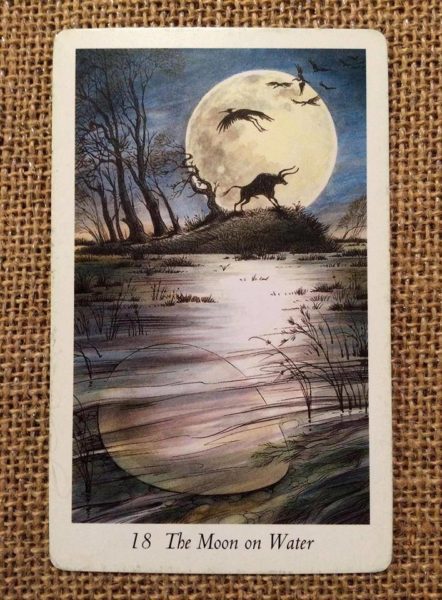 Of all the tarot cards it is The Devil that causes modern readers the most problems. There he is, card fifteen, giving us the number six. In traditional decks like the Rider-Waite he has the horns and the goat’s feet, his willing slaves chain themselves to  him. He isn’t an outside force but our own weaknesses. We own the key that unlocks the chain. He is greed and con- sequent debt, addiction, the affair that makes neither party happy, the job that we force ourselves to go to every day, fearing to make changes.In the Arthurian Tarot he is Cernunnos, the Horned One. He is our own untamed, primitive nature stripped bare of the thin veneer of ‘civilisation’. He is nature red in tooth and claw, the survival of the fittest, the self-destructive ego. It’s a scary card but one of the most useful when it does appear. Like all the tarot cards, the horned one tells us what we really need to know.

As a form of divination tarot has been much maligned, labelled as simply pink and fluffy. By using any of the Celtic based decks we can accept tarot as a way of connecting with our true selves in a way that works within the path of Druidry. 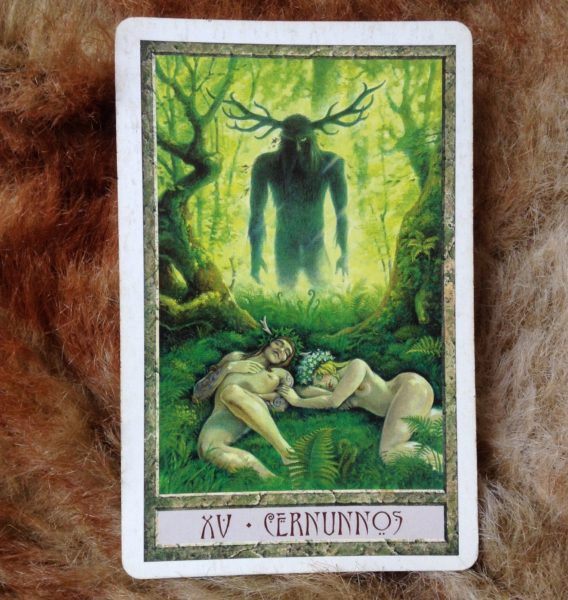 Tarot’s illustrated are The Wildwood Tarot and The Druidcraft Tarot.