Jesus Among the Druids

I recently discovered that Chico Xavier – in intimate conversations with his friends – claimed to have been a Druid in a past incarnation. Not only that, it is documented that he once confided to a close friend that “Jesus was supposed to be born among the Druids in Gaul”…

Jesus Among the Druids

Chico Xavier (1910-2002) is one of the greatest personalities in Brazil. He was a talented medium and a great philanthropist. He psychographed more than 500 books, donated all the money to charities and lived as a true holy soul, in addition to being unanimously known as an authentic medium. In spiritual meetings, when he psychographed, he received letters from the spirit world containing hundreds of details about the life of the spiritual being and his/her family, which he had never known before – even a court decision accepted as evidence a letter from a “dead” person channeled by him. Xavier was recently elected the greatest Brazilian of all time by the people; he was really a great human being and his life deserves be studied.

I recently discovered that Chico Xavier – in intimate conversations with his friends – claimed to have been a Druid in a past incarnation. Not only that, it is documented that he once confided to a close friend that “Jesus was supposed to be born among the Druids in Gaul” because the Druids were the most prepared group to receive Christ on Earth and help in his mission. However, according to his thesis (received by Chico from the spirit world and his Guide Emmanuel), the “dark side”, sensing that the light would incarnate on Earth, tried to prevent the coming of Jesus, influencing Julius Caesar for him to invade Gaul and attack those people. So, the plan had to be changed and, instead of Jesus being born in Gaul among the Druids, he was born in Galilee (which is, in Portuguese, short for Gaul – a sign that humility conquers all evil). Furthermore, this theory also holds that many of those Druids would have reincarnated along with Jesus, such as some Essenes and close disciples (John the Baptist, John the Evangelist, Martha, Mary Magdalene, etc.) to help in the mission of Christ.

Inspired by this statement, I decided to paint a picture representing this scene – a “Jesus among the Druids” – and I used real leaves from an Oak tree that I have grown, to make a golden crown and place a leaf in his hand, inviting us to simplicity and the peace of the woods.Well, we can’t tell if this story is true or not (although I trust the authenticity of Chico Xavier’s mediumship – he’s known for never getting a single piece of wrong information), but I wondered what it would have been like if Jesus had been born among druids? Certainly, instead of a crown of thorns, he would have worn a crown of oak leaves and would have gotten along very well with the Celtic priests and priestesses. 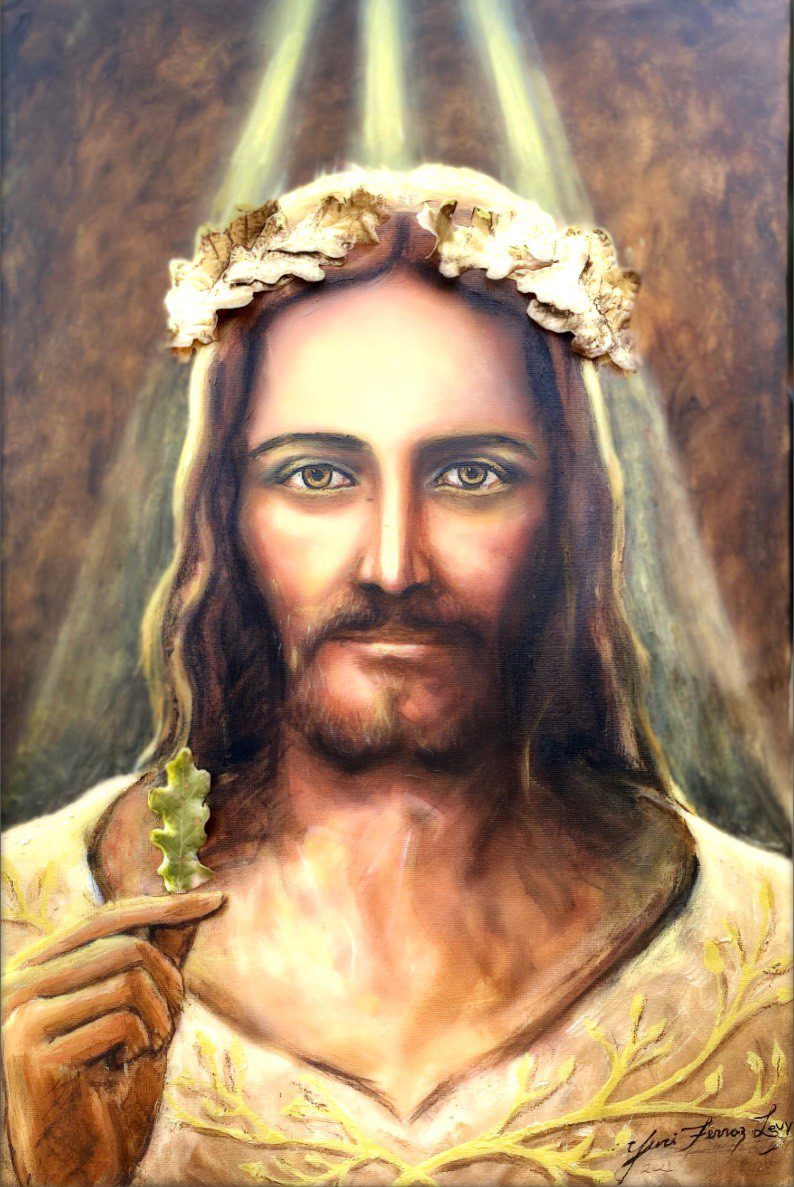 I share this painting in the hope that it will bring something positive. It would certainly do a lot of good for the mentality of my country Brazil – and the world – if people would associate the wisdom of Jesus with an eco-spirituality; with the affirmative celebration of life (as a blessing, not a sin) and all that wonderful non-dogmatic spirituality brought by the Druids .

The day I finished painting, I dreamed of Saint Bernard of Clairvaux. Then I discovered that some people associated him with the Druids. He once said that it is in the forest, not in books, that the divine can be found.