Mead: The Drink of the Gods and the Druids

A Brief History of Mead and an Easy Recipe for Making Mead.

A Brief History of Mead and an Easy Recipe for Making Mead.

Mead: The Drink of the Gods and the Druids 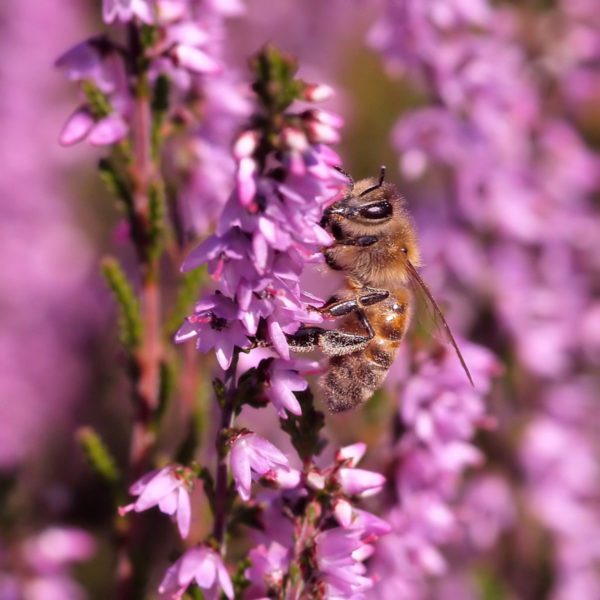 I will adore the Ruler, chief of every place,

Him, that supports the heaven: Lord of everything.

Him, that made the water for every one good,

Him, that made every gift, and prospers it.

May Maelgwn of Mona be affected with mead, and affect us,

From the foaming mead-horns, with the choicest pure liquor,

Which the bees collect, and do not enjoy.

The multitude of creatures which the earth nourishes,

God made for man to enrich him.

Some fierce, some mute, he enjoys them.

Some wild, some tame, the Lord makes them.

For food, for drink, till doom they will continue.

I will implore the Ruler, sovereign of the country of peace,

To liberate Elphin from banishment.

The man who gave me wine and ale and mead,

And the great princely steeds, beautiful their appearance,

May he give me bounty to the end.

By the will of God, he will give in honour,

Five five-hundred festivals in the way of peace.

Elphinian knight of mead, late by thy time of rest.

How could an ovate not start an article but by citing a poem of Taliesin?

Some said (in fact the ancient Greeks said) that mead was dew sent from the heavens and then collected by bees, who were seen as messengers of the gods. We are now more prosaic, and say that mead is made from honey, water and yeast…

But what were the origins of mead? One can but speculate. More than 20,000 years ago feral bees were well established in the African bush. Weather patterns were seasonal, with dry and rainy seasons. Such weather patterns would cause hollows to rot in the crowns and branches of trees. Bees would nest in some of these hollows during the dry season, and during the wet season the hollows would fill with water. Honey, water and wild airborne yeast…and hey presto…mead (perhaps)!

Moving on from this hypothesis, the earliest recorded evidence of mead dates from approximately 7,000 BCE. Archaeologists discovered pottery vessels in the Neolithic village of Jiahu, in Henan province, Northern China, that contained chemical signatures of honey, rice and compounds normally associated with the process of fermentation.

The first evidence of mead in Europe dates to approximately 2,880 to 1,800 BCE, during the Bronze Age. Throughout this period the Bell Beaker culture were producing their characteristic bell beakers, some of which pottery contained chemical signatures for mead production.

The earliest surviving description of mead is possibly the ritual drink soma, mentioned in the hymns of the Rigveda, one of the sacred books of the historical Vedic religion, dating to around 1,700 to 1,100 BCE. One verse in the Rigveda also says: ‘In the wide-striding Vishnu’s highest footsteps there is a Spring of Mead.’

By the time of Pliny the Elder (23–79 CE) mead was popular in the Roman empire. He wrote about how to make mead in his Naturalis Historia. He said: ‘A wine is also made of only water and honey. For this it is recommended that rainwater should be stored for five years. Some who are more expert use rainwater as soon as it has fallen, boiling it down to a third of the quantity and adding one part of old honey to three parts of water, and then keeping the mixture in the sun for forty days after the rising of the Dog-star. Others pour it off after nine days and then cork it up. This beverage is called in Greek ‘water-honey’; with age it attains the flavour of wine.’ 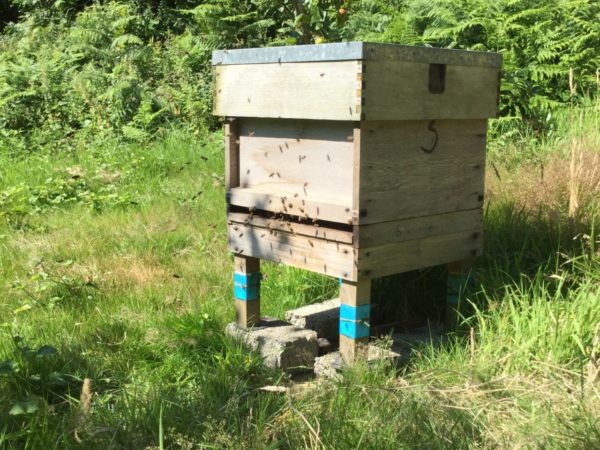 Mead was a popular drink in Ireland: beekeeping arrived in Ireland around about 5th Century CE, and along with it came mead. One name that was given to it was the ‘Dainty Drink of the Nobles.’ A banqueting hall on the Hill of Tara was known as Tech Mid Chuarda. It is said that the mead was often infused with hazelnuts. It is suggested that mead was often used as payment of rent.

In or about the middle of the sixth century Taliesin wrote his song to Mead. Legendary drinking, feasting and boasting of warriors in the mead hall was depicted in the poem Y Gododdin, attributed to the poet Aneirin, who would have been a contemporary of Taliesin. In the epic Anglo-Saxon poem Beowulf, which dates to around 8th century CE, mead is first mentioned in the fourth line and then appears frequently throughout the rest of the poem. Mead was very popular in the early Middle Ages, especially among the Anglo-Saxons, Germans and Scandinavians, whereas wine was the preferred beverage in the warmer climates of what is now Italy, Spain and France.

In Wales Hywel the Good (who died in 950 CE) drew up and codified various laws. Those laws showed that the Welsh princes had certain privileged officials at their courts, amongst whom were the mead-brewer and butler. The mead brewer was an important man: ‘he had his land free, his horse in attendance, and his linen clothing from the queen and his woollen clothing from the king.’

Mead makes an appearance in Chaucer’s Canterbury Tales – The Miller’s Tale (written in the late 1300’s.) Mead is described as the draught of townfolk, and used to court a fair lady.

‘He sent her sweetened wine and well-spiced ale

And waffles piping hot out of the fire,

And, she being town-bred, mead for her desire

For some are won by means of money spent

Mead slipped out of mainstream consumption over the last five centuries or so. The decline appears to have been for a number of reasons, one of which was competition from other alcoholic drinks such as wine, beer, and ultimately distilled spirits, all of which could be produced more cheaply and more consistently than mead. Taxes and regulations also combined to drive commercial mead out of popularity. Once sugar cane was discovered and imported to England and Europe that inexpensive source of sweetening contributed to the decline of honey, and hence mead. Some monasteries in England and Wales kept up the tradition of mead making as a by-product of beekeeping, but with the dissolution of the majority of the monasteries in the 16th Century mead making all but disappeared. It is only recently, with interest in craft products reviving, that mead is once again becoming popular. 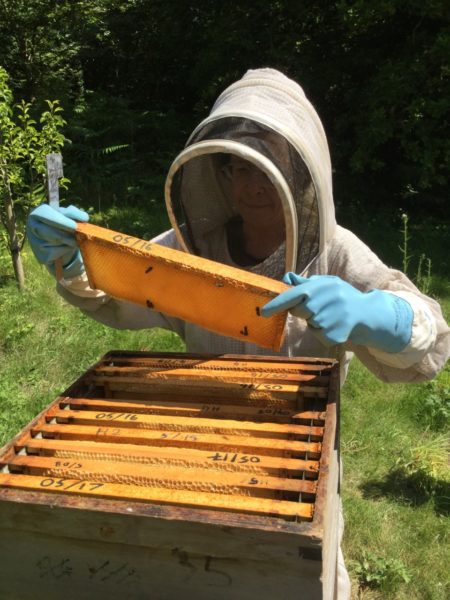 HOW TO MAKE MEAD

One could say: start off by taking up beekeeping; let the bees gather in the nectar; remove the honey supers; spin the honey out and let it settle. Alternatively buy some honey, but as far as possible get good quality local honey. The quality of the honey affects the quality of the mead.

Water is needed; it should be as pure as possible. If your water is chlorinated then buy in some bottled spring water.

The third ingredient is yeast; we use a good quality dried wine yeast.

No other ingredients are needed, although there are some recipes which suggest additions such as marmite, Epsom salts and tea!

The following is how we make our mead, although there are numerous other recipes and methods.
What you need:

A packet of good quality dried wine yeast (we use Gervin GV10);

A jam pan or equivalent;

Bung and airlock for demijohn; 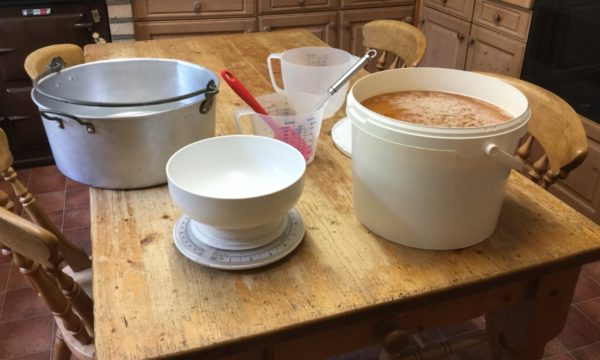 It is vitally important that the demijohn is clean and sterile before you start; many home brew failures are caused by lack of cleanliness of the equipment.

Heat the water in the jam pan to approximately 125 degrees Fahrenheit, remove from the heat and add the honey. Mix well until the water and honey are thoroughly blended. Pour the bulk of this mixture (the must) into the demijohn, but leave a gap of several inches at the top, since the early stages of fermentation will be very vigorous and produce large amounts of foam and bubbles which could otherwise mess up the airlock.

Ladle off a small amount of must and put this into a glass or cup. Allow the contents to cool to 70 to 80 degrees F, and then sprinkle the dried yeast on top of it. Leave the yeast to work for a while, until it begins to foam. (Check the instructions on the dried yeast packet, since methodology may vary according to the make of yeast.) 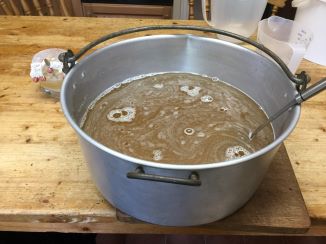 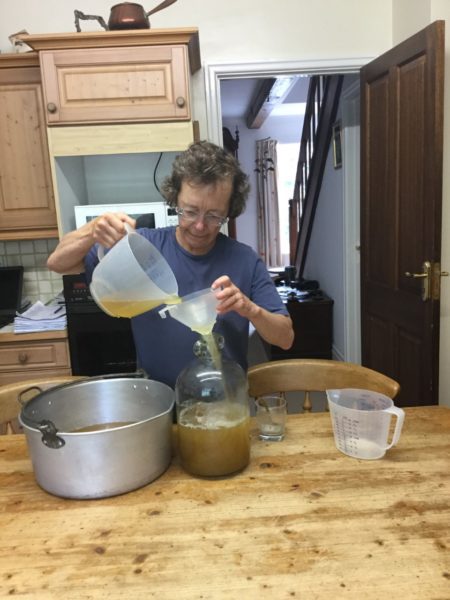 Keep checking the temperature of the must in the demijohn; when this, too, has a temperature of approximately 70 to 80 degrees F the foaming yeast can be poured in. Put in the bung and airlock (with water in the airlock) and leave in a warm space to start fermenting. Store the balance of the must in a covered container in the fridge.

The initial fermentation will be vigorous, but will calm down after a few days. Once it has calmed down top up the demijohn…but not all in one go, since the topping up will cause more foaming. Top it up gradually over 10 days to a fortnight. The water in the airlock will be bubbling away; it can be quite hypnotic!

Leave well alone until fermentation has stopped. The first sign of this will be that bubbles are now longer passing through the water in the airlock; the second sign is that if you look carefully at the mixture in the demijohn you will no longer see bubbles rising. The length of time that it takes to get from the initial mixing to fermentation ceasing varies tremendously: it can be anything between about 6 weeks to 10 weeks. 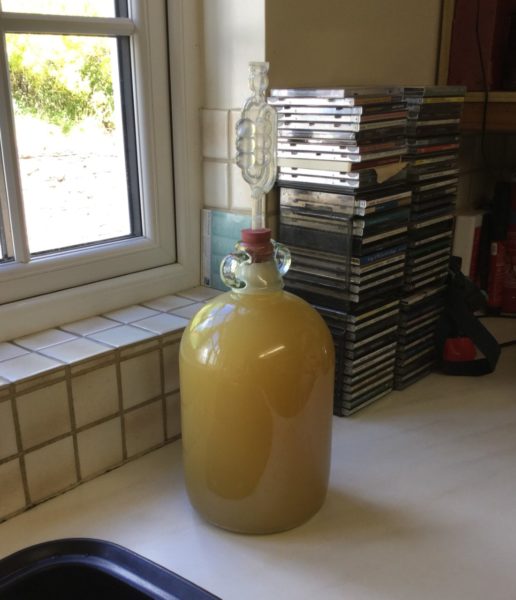 At this stage there is now a choice. Some people add a crushed campden tablet, the active ingredient of which is potassium metabisulfite. The reason that people add it is that it sterilises the mixture, kills any bacteria and inhibits the growth of any wild yeast. If a tablet is added we find that the mixture bubbles for a further one or two days. Thereafter, (or if you decide not to add a campden tablet) remove the bung and the air lock, insert a solid bung and leave in a cool room for a few weeks to fully settle. 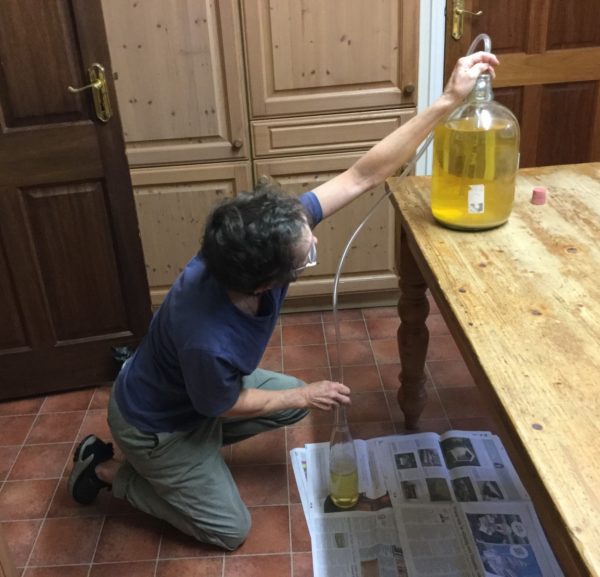 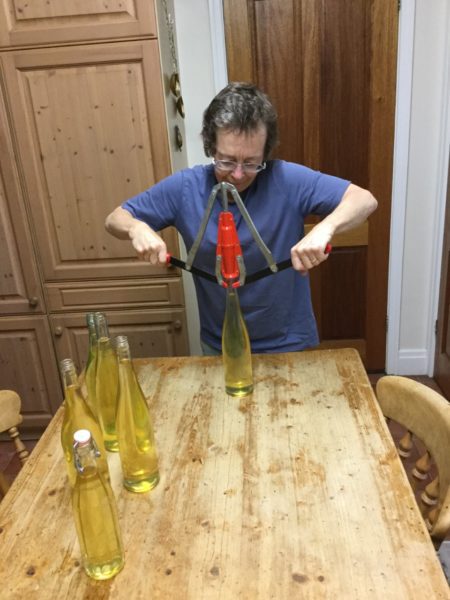 Then comes racking; this means to syphon off the mead from the demijohn into bottles, using gravity, leaving the sediment behind. Once again it is vital that you sterilise both the syphon tube and the bottles that you are going to be using. Carefully carry the demijohn from the cool room to where you are going to do the syphoning, making sure not to shake the demijohn or disturb the sediment at the bottom. We put the demijohn on the kitchen table, with the bottles on the floor, which gives a sufficient fall for gravity to work. Insert the one end of the syphon tube into the demijohn, making sure that it does not descend into the sediment. Get the syphon action going and fill your bottles. You need to stop the syphoning just before the sediment starts to enter the syphon tube. We also syphon a small quantity into a glass: both in order to taste it, and also in order to check the alcohol content. You can use a hydrometer or whichever other method you prefer.

Then cork the bottles (if not using flip tops), label and you have your mead! 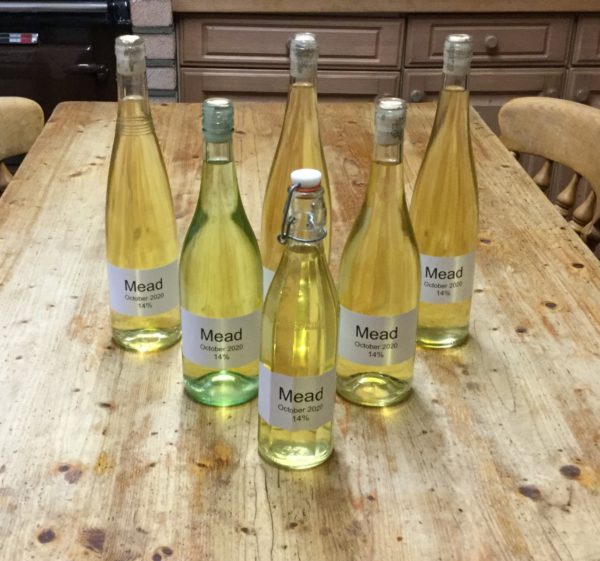