Built by the strong Dagda, it was a marvel, a court, a wonder hill.~ The Book of Ballymote ~ New Grange is the largest and most impressive of several dozen prehistoric monuments found in the Boyne Valley 32 km (20 miles) northwest of Dublin in Ireland. Famous for being oriented to the… 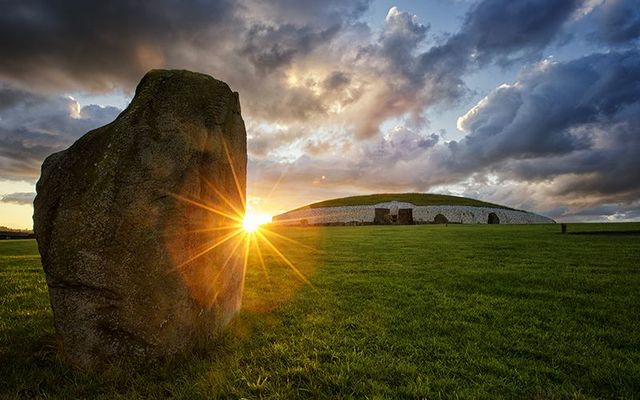 Built by the strong Dagda, it was a marvel, a court, a wonder hill.
~ The Book of Ballymote ~

New Grange is the largest and most impressive of several dozen prehistoric monuments found in the Boyne Valley 32 km (20 miles) northwest of Dublin in Ireland. Famous for being oriented to the winter solstice sunrise, New Grange was constructed 5,000 years ago, and forms part of a sacred landscape that includes the nearby site of Tara, seat of the ancient kings of Ireland. Here and in the surrounding countryside, myths abound. The river Boyne is named after the goddess Boann, and its source is the magical Well of Segais. Nine hazel trees grow around this well, dropping their ripe nuts into the waters below to feed the ‘salmon of knowledge’ who swim in its depths. Just as salmon is plentiful in this stretch of the river, so stories of otherworldly figures and the accounts of their loves and lives gather around this sacred place. The river goddess Boann mated with the father-god The Dagda to give birth to Aenghus Og the god of love, who took possession of the house built by his father. Gazing at it now, with its blocks of white quartz which gleam in the sun, we can sense his presence even today.

This was my palace. In days past many a one plucked here the purple flower of magic and the fruit of the tree of life…” And even as he spoke, a light began to glow and to pervade the cave, and to obliterate the stone walls and the antique hieroglyphics engraven thereon, and to melt the earthen floor into itself like a fiery sun suddenly uprisen within the world, and there was everywhere a wandering ecstasy of sound; light and sound were one; light had a voice… “I am Aengus, men call me young. I am the sunlight in the heart, moonlight in the mind; I am the light at the end of every dream… I will make you immortal; for my palace opens into the Gardens of the Sun.A Dream of Angus Og, AE (George Russell) 1897

19 km (12 miles) southwest of Tara, royal city of the High Kings of Ireland, the River Boyne curls its way around the land to form a bowl about 5 km (3 miles) wide and 1.61 km (1 mile) deep. This area is known as the Brugh na Bóinne, ‘The Palace of the Boyne’, and it is one of the most impressive sacred landscapes and archaeological sites in all of Europe. Twenty six passage tombs dated to the Bronze Age can be found in this part of the Boyne Valley, leading some scholars to compare it with the royal cemetery in Upper Egypt, and calling it Ireland’s own ‘Valley of the Kings’. But many now believe that it is more than just the resting place for the bones of an ancient people who lived in this fertile region. The most striking of the monuments in this valley is New Grange – an enormous artificial mound built in around 3250BC covering an acre of land that has now been dramatically renovated with blocks of white quartz which blaze in the sun. Its entrance reveals at once the mystery that many people feel lies at the heart of this sacred landscape.

A Place of Mystery

As you walk towards the monument on the hill you notice at once how around the base of the mound many of its 97 large granite kerbstones are carved with geometric designs of spirals, lozenges, zigzags, and other symbols, reminiscent of the patterns found on the stones at the mound of Gavrinis in Brittany (see page 00). Facing the white wall of stone as you walk towards the entrance you come to the most magnificent kerbstone of all, with its swirling carvings of a triple spiral, double spirals, concentric semi-circles and lozenges. This is the first clue, perhaps, that this is a place of mystery – a place of return to the centre, of spiralling in to the heart of life. But then look up to the entrance itself and notice the peculiar opening above it. This is known as the ‘roof box’ and it is a chamber that runs above the entrance passage-way bringing light to the innermost sanctuary of the mound. And here is the second clue: this chamber is oriented to the winter solstice sunrise – the time of the longest night in December when the sun is reborn from its winter sleep and the days start growing longer again.

When New Grange was first discovered in the modern era in 1699 by Charles Campbell, the roofbox remained hidden, but later archaeological restoration started to reveal the grandeur of this monument. It is now estimated that 200,000 tons of granite from Dundalk Bay, 120 km (75 miles) away, together with white quartz brought from the Wicklow mountains, 80 km (50 miles) away, were used to create the great cairn, which was surrounded by a circle of standing stones. Originally this circle was probably of 38 stones. Today only 12 remain. 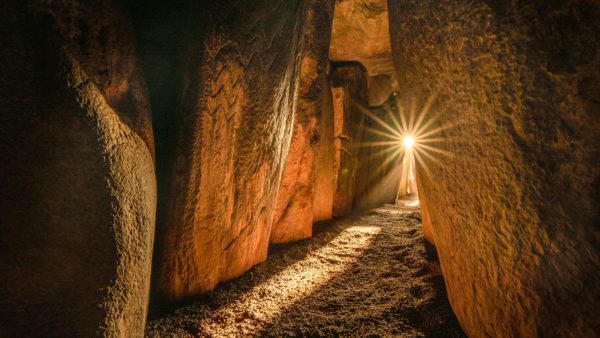 The roofbox was discovered by Professor Michael Kelly and his team during major restoration works carried out in the 1960s. They unearthed the opening to the shaft to find that it was half obscured by a square block of quartz. There were scratches on this stone as if it had worked as a shutter that had often been slid to and fro. Kelly remembered a local tradition that the sun always shone into the tomb at midsummer, but checking the orientation of the shaft showed that it faced not the midsummer, but the midwinter sun.  On the winter solstice of 1967 Kelly crawled along the sixty foot passage-way into the main chamber of New Grange on his own and waited in the darkness until sunrise. He was rewarded with an experience which has led him to return to the mound every winter solstice since that time: ‘I was literally astounded’ he recounts, ‘The [sun]light began as a thin pencil and widened to a band of about 6 in. There was so much light reflected from the floor that I could walk around inside without a lamp and avoid bumping off the stones. It was so bright I could see the roof 20ft above me. I expected to hear a voice, or perhaps feel a cold hand resting on my shoulder, but there was silence. And then, after a few minutes, the shaft of light narrowed as the sun appeared to pass westward across the slit, and total darkness came once more.’ Soon scholars began to speculate that Kelly had experienced one of the main purposes of the temple, which could be seen as a place of initiation into the mysteries of rebirth during the time of greatest darkness. The entry of the midwinter sun occurs for 5 days, from 19th to 23rd December and now it is possible to enter your name in a lottery to be among the ten people who are allowed to sit in the chamber on one of these five nights, awaiting the arrival of the sun. In 2006 27,485 names were entered in the lottery drawn by local schoolchildren.

The Fairy Mound of Darkness

As if to capture the fertilising and magical power of the midwinter sun, the entrances to a number of sites around New Grange are also oriented in its direction. Once the rising solstice sun has left New Grange it finds its way into a number of satellite cairns during the day until at sunset it enters the large cairn of Dowth, known locally as the Fairy Mound of Darkness. Deliberately or not, the Ancients succeeded in re-creating the drama of the creation of life in stone and in light. With tons of material hauled and erected with great effort they built a cave, a womb, of the Mother Goddess that would receive the seed of the Sun God. It is as if they believed that the answer to one of life’s greatest mysteries – the mystery of death – could be found by re-enacting the process of conception on the grandest of scales. Perhaps safe within the dark womb of the Earth Mother, fertilised by the bright ray of the Sun Father, both the dead and the living could be re-created, reborn. This phenomenon may have been created exclusively for the dead in the hope of their rebirth in this or another world, or it may also have been created to provide an experience of initiation for living members of the tribe. Such an experience could have been enhanced by the unusual acoustic effects that can be obtained within the monument, and some writers have speculated on the ability of the geometric carvings on the stones to effect changes in consciousness. Others have wondered about the ritual use of the mysterious stone basins that were found in the side alcoves. If New Grange speaks to us of the magical power of the sexual act to create life, the mythology that has accumulated around the monument builds upon this and points its emotional and spiritual counterpart – for New Grange is known in legend as the house of Aenghus Og, the god of Love.

My original lesson with the triple spiral at Newgrange came in 1959 on a cold Winter Solstice morning, by invitation of my grandfather. We entered the cairn in relative darkness and silently stood waiting for something that was unknown to me to begin. When the red warm light began to flood the darkness with its liquid gold, the movement toward me was captivating. I had been placed in a specific spot located directly across from the triple-spiral and it was there that I saw the light stop momentarily focused upon the symbol, with all the point marks that capture the light causing it to wink and sparkle with life similar to the stars in the night sky. I knew at that moment this space was a womb and a place of birth and re-birth.
~ Sonja Geoghegan

Surely Newgrange has to be more than a grave? There are a number of ways of burying a body easier than under 200,000 tonnes of stones. Let the archaeologists call it a passage grave. I prefer to call it a passage mound. It is permissible to see this complex of mounds as the longest and greatest engineering project ever undertaken on this island of Ireland. If you want a better word to describe the three great mounds in the Boyne Valley, then I suggest the word “cathedrals” would be the most appropriate.

Glimmer of the Dawn,
I arise from your embrace.
~ Caitlin Matthews, Celtic Devotional 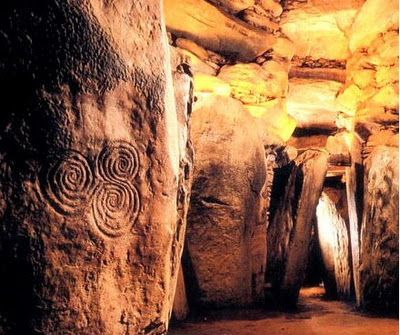 c3250 BC –New Grange is constructed

1699 – The entrance discovered accidentally while removing material from hillside for road-building by Charles Campbell
1725 – Thomas Molyneux writes that NewGrange was built by the Danes between the 8th and 9th centuries.
1890 – Irish archaeologist George Coffey begins work on the site
1962-1975 – Michael Kelly leads major excavation and rebuilding works, including restoring the quartz facing stones – a controversial move that has upset some commentators
1967 – Michael Kelly experiences the sun’s penetration of the inner chamber on the winter solstice
1983 – Martin Brennan’s book The Star and the Stones suggests NewGrange is a solar temple rather than a burial mound