So one spring morning when I awoke to a ‘true blue dream of a sky,’ I knew right away that this was the day I should visit the ‘leaping greenly spirit of trees’… 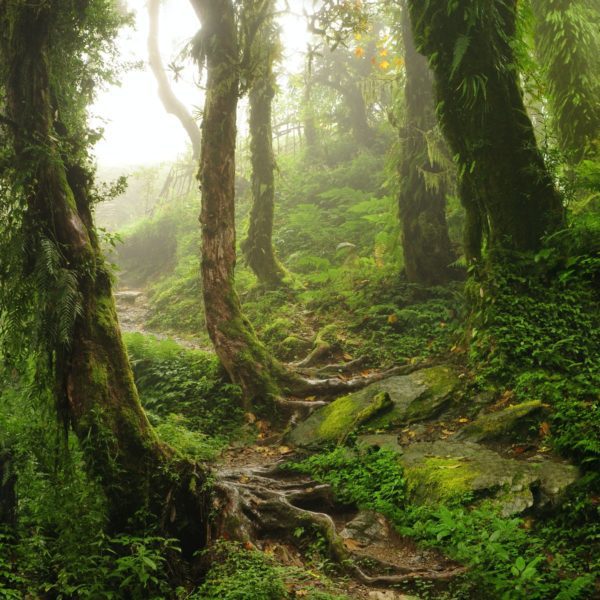 From Teaching the Trees: Lessons from the Forest by Joan Maloof ~ a beautifully written and beautifully produced book. Read the first chapter here, which is reprinted by the permission of the University of Georgia Press, then buy the book! For more information on the book visit www.ugapress.org

For years I have been explaining to the students in my classes that Maryland’s Eastern Shore has no old-growth forests left, whatsoever; that this land the early explorers called Arcadia because of its numerous stately trees has been completely altered, and not a single original forest remains. Depending on my mood the day we discuss it, I relate this fact either with anger or with sadness. Last semester, however, I heard rumors that a twenty-acre remnant of old-growth forest remained. Twenty acres can barely be called a forest, but still I was anxious to see this unique scrap. So one spring morning when I awoke to a “true blue dream of a sky,” I knew right away that this was the day I should visit the “leaping greenly spirit of trees.”(1) 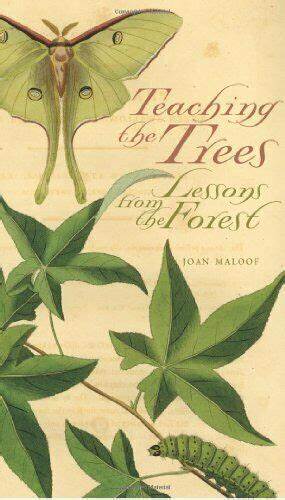 The forest was more than sixty miles away, and detailed directions were necessary to find it. Even before the car stopped on the isolated dirt road, a sweet, rich, earthy smell filled my senses. I used to think that particular odor was the smell of the mountains, but here I was, still on flat land. Did my own ground once smell like that too–before the grandfather trees were gone, in a time when the trees’ breath merged with that of the fungi and the birds and the insects? When we discuss what we miss about forests after they have been cut, we usually mention the sight or the shade or the species; but now I was breathing deeply of a forest gift I had forgotten: the air! Americans largely ignore this dimension of the forest’s allure, but the Japanese recognize it and have a name for it: shinrin-yoku–wood-air bathing. Japanese researchers have discovered that when diabetic patients walk through the forest, their blood sugar drops to healthier levels.(2) Entire symposiums have been held on the benefits of wood-air bathing and walking. I certainly feel better after a walk in the woods, but until I read about it, I didn’t know there was a name for my therapy.

What could be in forest air that makes us feel better? Researchers working in the Sierra Nevada of California found 120 chemical compounds in the mountain forest air–but they could identify only 70 of them! (3) We are literally breathing things we don’t understand. And when we lose our forests, we don’t know what we are losing. Some of the compounds in the air come from the bacteria and the fungi in the soil, but most are given off by the trees. Trees release volatile organic compounds from little pockets between their leaf cells. A number of theories exist about why they release the compounds. Possibly it is to deter insects. Or possibly the compounds are just metabolic by-products, and this is how trees eliminate them, having no excretory system. The scientific community is still undecided. 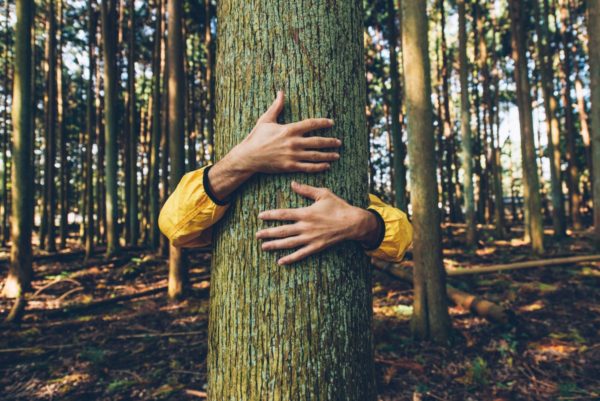 I like to think of these enticing fragrances as a sort of mutualistic reward for humans – a Botany of Desire scenario where the trees are using one of the few wiles they have that work on humans, (4) although in some cases, such as that of the sassafras tree, having a pleasing aroma is grounds for decimation. Native Americans used the sassafras medicinally, and European explorers were quick to adopt the fragrant leaves for both medicinal and culinary uses. The first shipment of sassafras was sent back to England in 1602, and sassafras remained the largest export for almost a hundred years.

It is not inconceivable that the trees may be altering our perceptions with their chemicals. The volatile molecules evaporate into the air and come into contact with the sensory neurons in our nasal passageways. The olfactory nerves send messages directly to the limbic system in our brains, which deals with instinctive emotions such as sex, memory, and aggression. The limbic system can certainly affect our physical bodies, and all of this can happen even without our perception of having “smelled” anything. 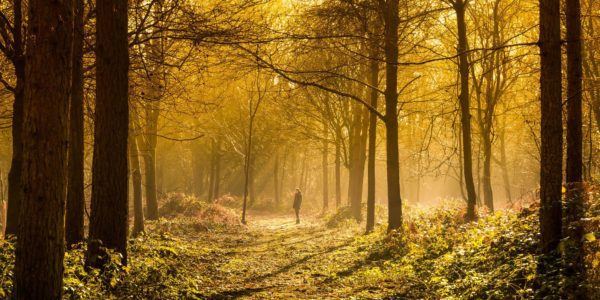 The molecules from the trees don’t just go up our noses, however; they are also part of the air that goes into our lungs, and once in our lungs, some of the molecules can enter our bloodstreams. So when we walk through the forest inhaling that sweet air, the wood-air, the forest actually becomes a part of our bodies. No wonder that a forest walk evokes the lines from Rainer Maria Rilke’s “Ninth Elegy”:

Earth, my dearest, I will. Oh believe me, no moreof your springtimes are needed to win me over–, one,ah, a single one, is already too much for my blood. (5)

Aromatherapy practitioners call these plant-produced volatile compounds “essential oils” and depend on handed-down folk wisdom to know the effects these various oils will have on the human body. Among the most abundant compounds given off by trees are monoterpenes. Aromatherapists claim that the monoterpenes in pine are antiviral and antiseptic, good for asthma and respiratory infections, but there is no medical research to back up their claim. There has been a great deal of research, however, on edible monoterpenes, and these have been shown both to prevent and to cure cancer. Many chemotherapy drugs contain monoterpenes, but we can also find them in our own kitchens; lemon rinds, in particular, have large amounts of them. Could inhaling monoterpenes be a cancer cure as well? Is shinrin-yoku a valid therapy? And a bigger question: Why hasn’t the Western medical community been researching the physical effects of inhaling the monoterpenes so abundant in forest air? Might it be because forest air cannot be patented, and consequently no money is to be made from it? 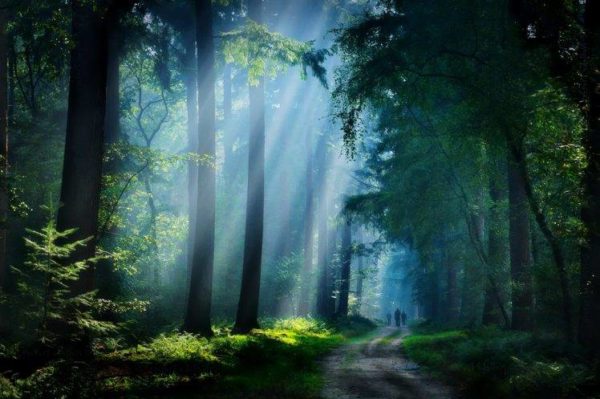 We decry the destruction of tropical rainforests, citing the wonder drugs that may eventually be found in them, but we may have miracle medicines lurking right beneath our own noses. Perhaps someday, when our physician asks us to “take a deep breath,” it will be old-growth air that he or she is recommending. I hope we don’t have to drive too far to find it.

My discussion has wandered far from the old-growth forest I visited that clear blue day. It was a beautiful and magical place. I felt healthy and whole while I was there, and for hours afterward. Perhaps my walk even killed that cancer cell that was trying to establish itself in my breast. Others have said it before, but I’ll say it again: Perhaps by trying to save the forests we are actually trying to save ourselves.

We know, instinctively, that our own health, both physical and spiritual, is a reflection of the health of the earth–for better or for worse. But we barely have words to discuss this connection, perhaps because we don’t yet have all the tools needed to measure it. The strands connecting us are largely invisible. In the poem still running through my mind Rilke says:

Earth, isn’t this what you want: to arisein us invisible?–Earth! invisible! 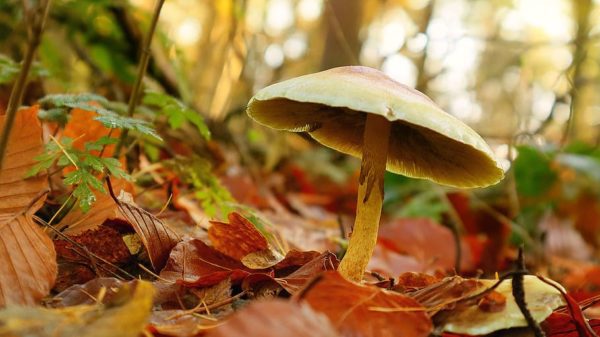 Most of us want to believe that something within us outlives our physical bodies. I think Rilke is exploring the idea that the things of this world want to tag along when we change form–and they can do that only if we take them into our hearts and build them into our invisible webs. “What if not transformation is your urgent commission?” he asks.

Many people are sensitive to these invisible connections; and those who are most conscious of the living web suffer the most when it is bombed, paved, or otherwise disrupted. Biologists are often attracted to the study of living things because we feel these connections. Learning the details about the interactions of the myriad living things on the earth only deepens our concern for them. Biologists frequently become champions and protectors for the organisms they study: To know them is to love them. And so biologists, like poets, have a special role to play in helping us stay aware of the connections–and a special obligation to speak out when the web of life is abused and disrupted.Most of us want to believe that something within us outlives our physical bodies. I think Rilke is exploring the idea that the things of this world want to tag along when we change form–and they can do that only if we take them into our hearts and build them into our invisible webs. “What if not transformation is your urgent commission?” he asks.

Breathe deeply; we are about to take a walk through the trees. 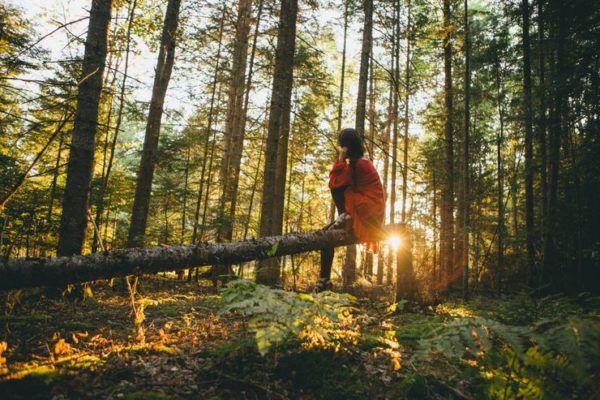