I am walking through a forest in the late afternoon sun. It is late August and the leaves, dancing listlessly in the warm breeze, shimmer in the sunlight and rustle, as though whispering secrets to one another. Father Sun is slowly setting now, shafting his beams through the canopy above to make little pools of… 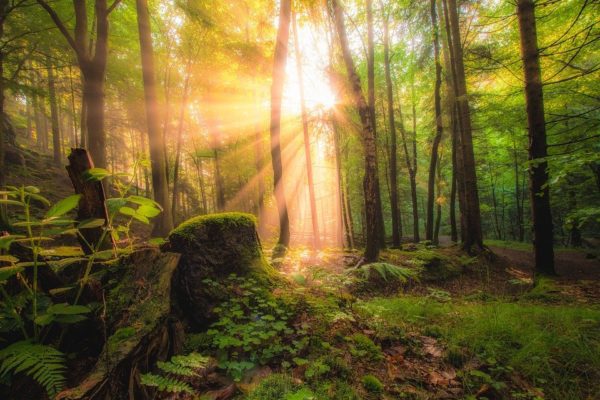 I am walking through a forest in the late afternoon sun. It is late August and the leaves, dancing listlessly in the warm breeze, shimmer in the sunlight and rustle, as though whispering secrets to one another.

Father Sun is slowly setting now, shafting his beams through the canopy above to make little pools of golden light dance on the musty, sweet smelling forest floor.The nearby Hazel copse and the scattered spindly Ash are dwarfed by the mighty Oaks whose leaves are like a myriad tiny green hands stretching upwards in a vain attempt to grasp the last vestiges of the now fading light of day, as the shadows grow ever longer.

The old dead Lightening Oak nearby becomes a dark and mysterious silhouette in the fading light, eerie against the red, deepening sky, the wind moaning through its long dead branches that click-clack together as they sway to and fro like the upturned legs of some huge dead spider.

The cares of day departed are as Father Sun sets stretching his golden arms from horizon to horizon through the silhouettes of the trees, until at last, like a fading life, he sinks below the horizon as night slowly and silently pulls its shadowy cloak across the sky and Mother Earth. 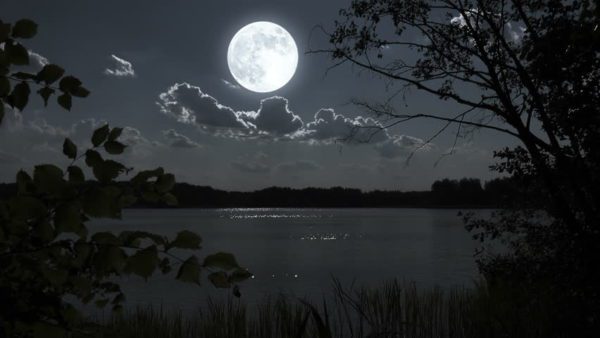 Daughter Moon slowly rises, full of face in all her beauty bright, illumining the August night as she draws her starry train about her; and the creatures of the night, once more emerge to begin their foraging as they have done for millennia.

The forest, once dark and mysterious in the fading light, now glows with an ethereal milky-blue hue. An owl hoots in the distance, its cry echoing through the night to fade away among the moonlight shadows. Another owl, even more distant, answers the call.

I come across a grassy clearing in the forest and stood at the tree-line gazing out, straining my eyes to see anything concealed in the shadows before me.

As Daughter Moon – my spiritual Sister and Earth Mother’s Daughter – climbs ever higher in the clear, star studded sky, the shadows of the trees slowly shift, and as I watch, the moonlight slowly, ever so slowly, revealed the stump of an ancient Oak several feet across at the centre of the clearing.

As Daughter Moon climbs ever higher, the shadows shorten, and a flash of reflected light upon the great stump catches my eyes and my curiosity, and I walk into the clearing and into the Moons’ full light. 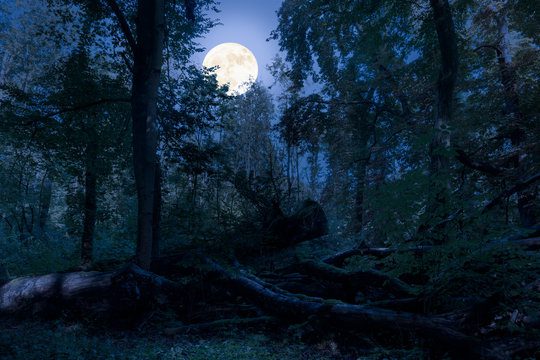 Another flash of reflected light upon the huge stump drew my attention, and as I slowly drew nearer, I saw that upon the stump were placed a gem-studded golden chalice some nine inches tall, and an ornately carved gold plate with gemstones in the shape of leaves and flowers about its circumference. Both were of exquisite beauty to behold, and in the chalice was what seemed to be the choicest of wines, and upon the golden plate was a delicious looking cream cake that seemed irresistible!

I approached, and as my feet touched the old, gnarled roots that stuck out, I noticed that concealed behind the finery was an old, cracked and worn wooden goblet with a chip missing from its edge, the face of the full moon reflected in water, and beside it was a slice of dry bread placed upon a green cloth. I stood there and beheld the sight for some minutes, undecided as to what this all meant.

Shortly, a tall, well-built man with a white beard and wearing a hooded white robe came out of the clearing and stood across the stump opposite me, the full moon above and behind him. With both hands, he pushed the hood of his robe back. He was slightly chubby of face and as he tilted his head back a little, the shadows of his white eyebrows receded and I saw a glint of mirth in his eyes that was pleasing and reassuring. About his neck hung a talisman. It was a St. Brigid’s’ Cross about four inches in diameter with elemental coloured stones set at each of the four quarters and was surrounded by a circle of stars, all suspended from a huge gold chain.He smiled as he spread his arms before the things on the stump and, in a soft, deep voice, bid me to eat and drink;

“Eat! Please do!  Help yourself!” he said merrily. I looked at him questioningly, then at the items on the stump. “Go on – don’t be afraid – all this is especially just for you!” he politely urged with a welcoming smile. I looked at him again. There was definitely a joyful glint of expectation in his eyes. I stood and thought for a moment. 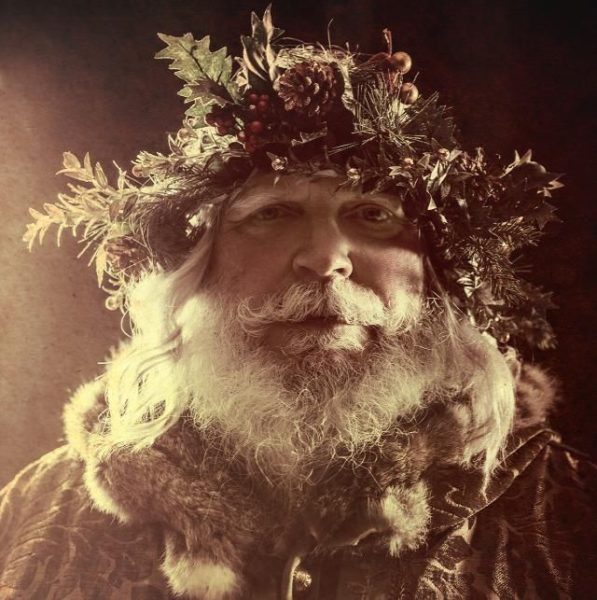 “Go on – please take whatever you need!” he said with a smile and that eager glint in his eye.

I had chosen. I reached out hesitantly, and took up the crust of bead and broke a piece off and cast it to the ground as an offering to the Goddess, then took a piece for myself, replacing the remainder upon the green cloth. Then I took up the cracked wooden goblet and poured a libation, thanking the Ancients for leading me in these ways, and the God with the words, “Hail to the Daughters of night – hail to the Sons of day!” then took a drink, replacing the goblet upon the stump.The robed man smiled at me, spread his arms wide and, with the slightest of bows towards me, slowly walked backwards, and as he receded and disappeared as mysteriously as he had arrived, the stump and things vanished.

I turned away and went to the edge of the clearing, where I sat down with my back against an old Oak tree, watching daughter moon in all her beauty bright surrounded by her starry train. Then in a matter of moments, the clearing also disappeared and I came out of my meditation to see Father Sun low on the horizon, and I made my way home. 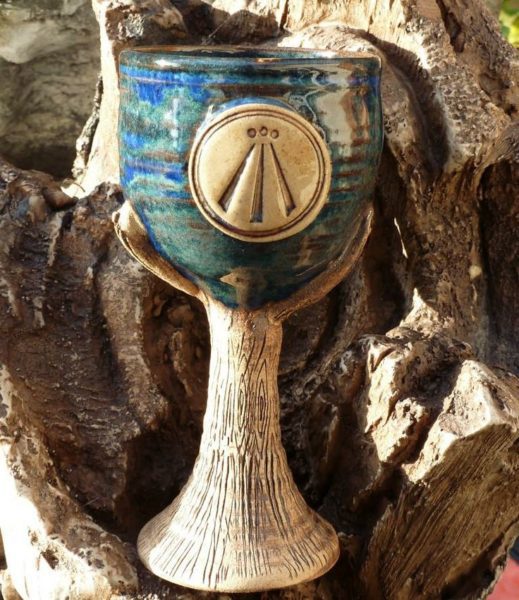