Along the ages, folk have put their faith in all manner of medicines, charms, prayers and superstitions to keep the bees in their hives healthy and the honey in their pots plentiful. Some of the lingering medieval powers that beekeepers invoked were those of Saint Valentine. Honey and bees have long been associated with deities… 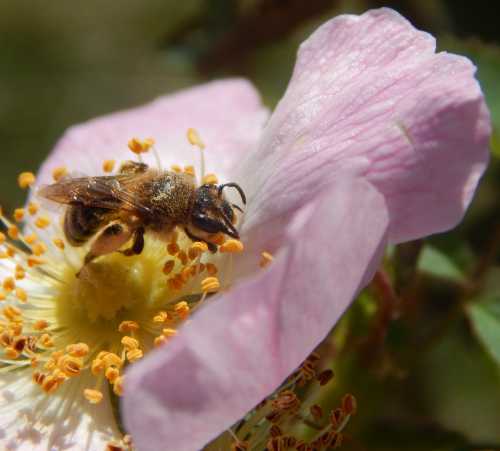 Along the ages, folk have put their faith in all manner of medicines, charms, prayers and superstitions to keep the bees in their hives healthy and the honey in their pots plentiful. Some of the lingering medieval powers that beekeepers invoked were those of Saint Valentine.

Honey and bees have long been associated with deities of love across Europe to Africa and further, so his current image is not out of place. How was he recruited into such charming company? Some say that one dilemma of the early church was how to oust the Roman feast of Lupercalia (15th February). It was a hairy flock blessing revel of dancing, drinking, sacrifice, love-lotteries and wild sexual expression. This ancient custom and festival of eroticism, revived by Julius Caesar, has its power rooted in a place, Lupercus, where the legendary she wolf Lupus suckled Romulus and Remus. Hence, it never caught on in Britain… but the celebration of Saint Valentine’s Day did.

It is thought by some, that in the effort to create a more demure and dour celebration of love, they searched for an innocent saint. A man named Valentine who was martyred on 14th February in the 3rd century fitted the bill. The problem was, he had nothing to link him with the making of love, the ‘birds and the bees’ or any kind of romance. Mightier pens were thought to have been wielded and he was re-branded (excuse the pun) as an Emperor defying prisoner who restored the sight to and fell in love with his jailer’s daughter. He is said to have left her a farewell note signed ‘Your Valentine’. Others will tell you that Saint Valentine was never associated with romance until much later, and that Chaucer revived the saucy connotations of his feast day.

However it happened, one festival neatly overlays the other. This is all the stuff of legend, but underlying the stories, the theories and the festivals, digging down through the layers of ‘social archaeology’ if you like; at the organic root of it all are the birds and the bees. During the ‘Ides of February’, nature is rising, birds beginning to pair and plan the year ahead, spring flowers opening and honeybees are expanding and keen to find forage. 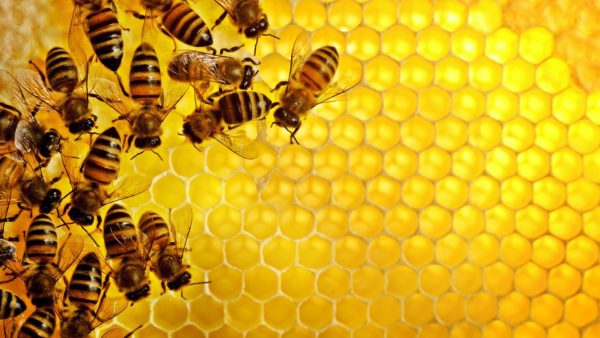 Throughout history it is a time when flocks were blessed by flock herders, nets were blessed by fisher folk, and one might assume that beehives were blessed by beekeepers as the new season starts, and the days grew noticeably longer. Stock was taken and one perhaps had a good idea of what had made it through the winter and what would need some extra help. Bees, as well as other livestock, crops and orchards, are commonly Wassailed in January to ensure health, vigour and a good harvest. A wassail is essentially a ceremonial toast, originally drunk from a large bowl, not dissimilar to a mazzer of mead.

Today Saint Valentine, as well as being patron of love and romance, is a patron of beekeeping…he is said to ensure the sweetness of honey, and the protection of beekeepers. Well known are the aphrodisiac and fecund properties of raw honey and well made meads ensuring high spirited honeymoons and higher sperm counts. Conversely, the ancient Egyptians used honey in a spermicidal contraceptive.

Either way, bees are mythically denizens of the goddess of love, be she known as Aphrodite, Venus or Gwen and hence have the powers of romance and retribution, as cupid’s arrow is dipped in either ambrosial honey or acidic venom. Amorous customs and sweet divinations upon Valentine’s Eve and Valentine’s Day were broad and varied among the British Isles, but I haven’t yet found any related to beekeeping. One I must mention though is that of being considered dusty if you didn’t receive a love token or visit from your loved one, and folk took much pleasure in dusting you down with brooms or brushes. 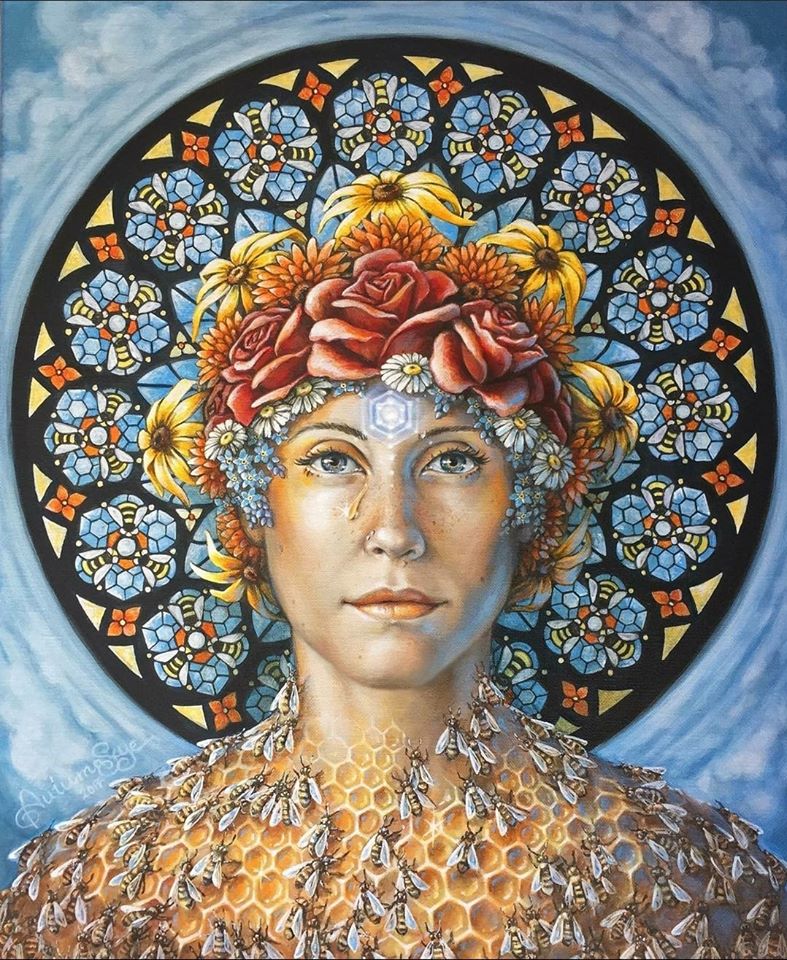 In Bulgaria the Patron Saint of Beekeeping is Saint Kharlampii. On his feast day, 23rd February, the Orthodox Church also honours Saint Valentine. (The Orthodox Church still honours the Julian calendar and there is about 13 days difference). Saint Kharlampii was a renowned healer who is said to have used honey and beeswax in his strictly natural remedies. His day used to be a Bulgarian national holiday when women would bake hive shaped pies, honey would be blessed and ceremonies held to cleanse the land of pestilence and plague. Again this has a similar function to the Anglo Saxon Wassail traditions that are still practiced today in this neck of the woods. The 24th February is Saint Matthias’ Day, which is the day to start sowing, to ‘shut up the bee’ and to store candlesticks for the last lingering dark evenings of early Spring.

In Ireland, Saint Gobnait, also known outside of Ireland as Saint Abigail and Saint Deborah, is the patroness of beekeeping. Interestingly her feast day is the 11th of February. Like Saint Kharlampii, she was said to be a great healer using honey in her remedies. Legend tells us that an angel appeared to her and said that she would find her rightful place, her resurrection place where she would dwell for the rest of her life, where she saw nine white deer. In one story she threw hives of bees at thieves and the air became brown with bees to see them off. In another she changed bees into soldiers and a hive into a brass helmet. Perhaps because of her associations with winning battles, she has been compared to Deborah the Prophetess, whose name means ‘bee’ in Hebrew. The root of which is an ancient Chaldean word meaning both ‘bee’ and ‘word’.

Within Great Britain, Saint Bartholomew is another Patron Saint of Beekeepers. Hives have been blessed upon his day, the 23rd of August, and in Cornwall it was customary to harvest honey from the bees then. 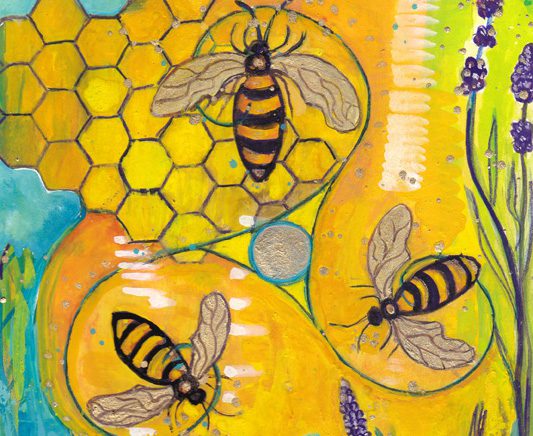 There are other saints associated with mead, such as…

Saint Findian, who lived on bread and water during the week, but allowed himself salmon and a full cup of mead on a Sunday.

Saint Brigit is said to have blessed empty mead vessels which were then found of be full. She also turned her bathwater into beer for some thirsty clerics, and was patroness of healing, smith-craft and poetry. The ‘mead of poetry’ echoes the pagan origins of the Saint: the Celtic goddess Bride. Her festival is on 1st and 2nd February, known as Imbolc (pronounced Im-olk) to the Irish Celts, literally meaning ewe’s milk. Her father the Dagda, the good god, owns an ever filling cauldron, perhaps a vestige of Saint Bride’s vessel filling legends. Snowdrops, sacred to her, open around this time, and bees begin to work them for forage. It was the first rite of Spring, a time of the first ploughing. Candlemass overlays this festival in one Christian calendar.

Saint Benedict was said to summon bees to nectar on his old feast day of 21st March. This is often the Vernal Equinox known in the Druidic traditions as Alban Eiler, the ‘light of the earth’.

Further afield St. Ambrose (Ambrogio) of Milan is associated with bees, but his Bassilica has not one bee within it. St. John Chrysostom, St. Rochus, St. Bernard of Clairvaux, St. Zosim and St. Barromeus can also be added to the list of saints who have beekeeping within their patronage.

In Wales, Saint David, whose honeyed wisdom was foretold to his father 30 years before his birth by through the gift of honeycomb, kept bees at his monastery so to give honey to the poor. Saint Modmonoc, Domnoc or Dominic, was a monk there, and became well known for his way with bees. So well loved by them was he that when tried sail home to Ireland, three times a swarm of bees settled on the mast. It will be of no surprise to you that his feast day is February 13th. 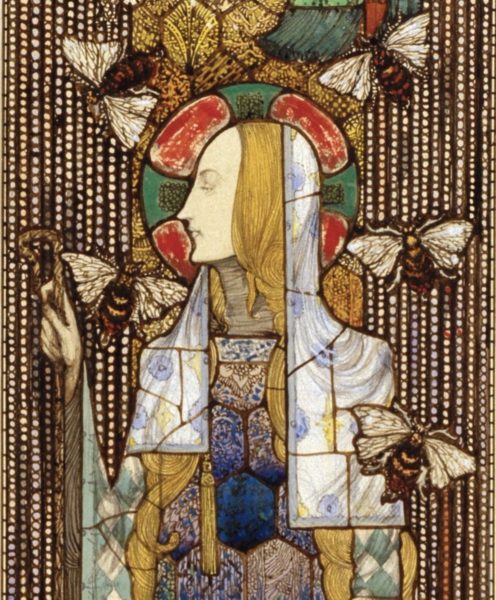 As for Saint Valentine, there are actually some physical relics of him amongst these sacred ‘Isles of Honey’: Glasgow and Dublin. There were some in Birmingham but they have been relocated abroad. As there were several Saint Valentines it is uncertain which one they originate from. However, relics can have an emotional and symbolic power, his skull is in Rome. His enshrined remains in Dublin are in the Carmelite Whitefriar Street Church, given by Pope Gregory XVI in 1836. A wee bit later in 1868 a wealthy French family donated an ornate wooden box of bones to Blessed St John Duns Scotus church in Glasgow. In some renditions of the Valentine legend, he gave his sweetheart a crocus flower as a symbol of his love, and just like the snowdrops, these first flowers of spring are often the first forage of honeybees… 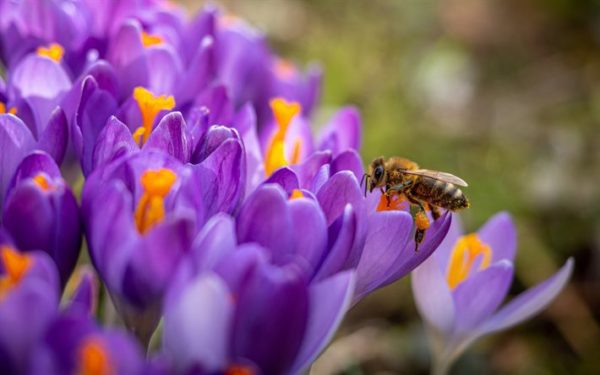