Up high on the hill, soft grass bending over nubbles of flint, dark handspushing upwards under hawthorn tangles and a grey-snagged sky. I suppose I shouldn’t have been surprised – after all I was obsessed with geology as a child and spent many a holiday bashing rocks and trying to get my long suffering parents… 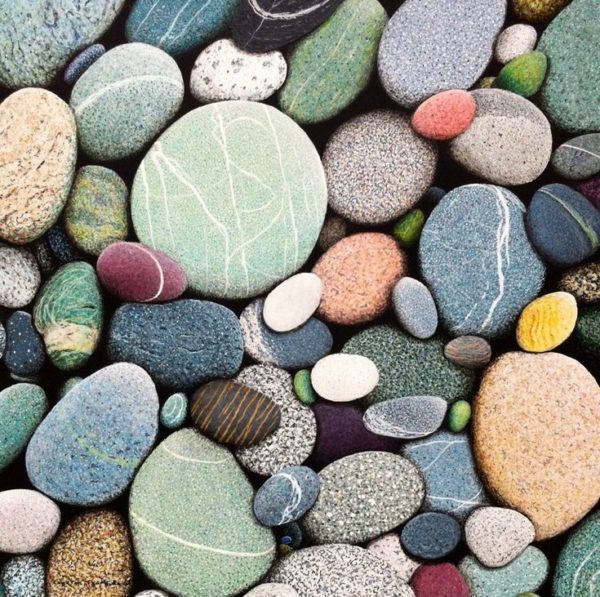 Up high on the hill,
soft grass bending over nubbles of flint,
dark handspushing upwards under hawthorn tangles
and a grey-snagged sky.

I suppose I shouldn’t have been surprised – after all I was obsessed with geology as a child and spent many a holiday bashing rocks and trying to get my long suffering parents excited by different kinds of granite. And friends of friends in Canada probably still remember me as the girl who told them they lived near a volcano (they had somehow managed to never notice that they were only short drive from an Enormous White Cone). I don’t expect they’ve slept well since. But I didn’t expect – years down the line when my rock collection under the spare bed had its own dust collection – that stones would speak to me. In fact, some of them are positively chatty in a giving out, spidey-sense sort of way, leaving me with all sorts of inner impressions of heat, light, colour, unusual weight, along with actual words.

It all started somewhere around the middle of the Bardic course when I was told to commune with a stone. From my embarrassingly extensive collection, I chose an interesting lump of rock which I’d squirreled away on a walk somewhere. I’ve lived a lifetime of finding miscellaneous stones in my pockets and trying to remember where on earth I picked them up from. Most had been kidnapped without their permission from somewhere really nice. Maybe this is a good opportunity to publicly apologise to every stone I ever stone-napped who didn’t want to exchange the Lake District for South Bedfordshire. Anyway, I created my Grove and sat with it in an unexpectant sort of way, and before you could say Upper-Devonian the stone – or something representing it – was lecturing me at length on the Four Elements, and how Air, Fire and Water work on, and with, Earth. But it was a very stone point of view. There was no way I could pretend that any of the others had any say in it at all. It was a unique perspective that would require an entire article on its own.

Encounters with slightly more spectacular crystals followed. My large quartz point was very emphatic about being always placed in the centre of my Grove as a healing transmitter. I was told that its heart was pure because it was always ‘just itself’. My Light Green Serpentine was to be used for ‘blessing’ and seemed to radiate presence. My Lapis Lazuli was for ‘peace’ and ‘cleansing’ and was so powerful (and hot!) to hold I could see light from it with my eyes shut. It was a wonder. 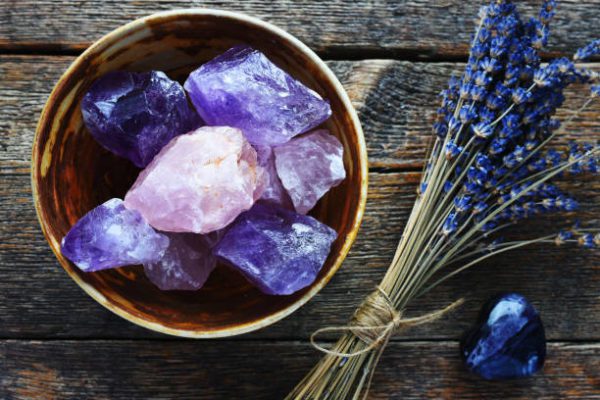 As the Bardic course rolled on I became obsessed with the spiritual guardianship of my local area – the chalk hills and ancient pathways of the eastern Chilterns. Or, more specifically, I became obsessed with flint. I’d always hoarded (more stones to apologise to) the lightly knapped flint scrapers that can be found everywhere, including my garden. Now I was stopped in my tracks by every interesting nobble and knuckle that the ground threw up. I could hardly walk without stopping to admire a flint like a long finger or bearing interesting brown wiggles. I started putting flints into paintings and writing flint poems. They became integral to my work to spiritually uphold and strengthen the local ecology. They were the bedrock of my connection with the ancient peoples who lived where I do without the benefit of mod-cons. They even connected me to my own distant ancestors who probably lived nowhere near but who must have traded for all the flint they could get.The hills hold in their fingersand knuckles of flint the sparksof hearth fires, the axe, the old ceremonyand the quick heart’s arrow.

Throughout the Ovate course I tried to focus on trees. I love trees. I’ve added, with their permission, obsessive twig collecting to obsessive stone collecting. I’ve made tree friends all over the place. Trees are great. But some have taken a long time to get to know whereas all stones seem to want to share from the get-go. Little tumble stones languishing in the ‘2 for £1 Bargain Bowl’ ask me to buy them. Lovely exotic crystals wink at me from Fairs (always be aware that not all crystals are responsibly sourced)but I have my attention snagged by a brown lump of something with no label. If I sit quietly with them they reveal what they are and how they would like to work with me. I try very hard to let them speak for themselves rather than look them up in books as they appear to have their own plans. Sometimes I think I’m turning into the Stone Whisperer. 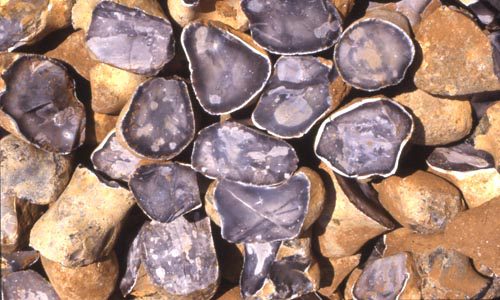 A few months ago a flat, thumbprint-sized piece of grey agate waved at me from a bargain bowl. I turned it over and it had a little pink heart and seemed to glow with inner fire like an opal. It took me a while to realise that it wasn’t actually glowing, it was just making a very good job of looking as though it was. It was as smooth as silk and I took it home with me and sat with it in my hand. I asked the usual question: how it would like to work with me? After quite a silence the reply came back ‘What work do you do?’ Now that was unexpected. Then… nada. It seemed to be taking stock of me and even came across as a little bit grumpy. Later in the day I decided I had asked the wrong question, so I started again with the question, ‘What can I learn about you?’ Always important to get the question right!

I was then told it wasn’t here to do work. It was a gift. Then I had a sudden and vivid impression in my mind of lilac light and two great white wings unfolding from the stone. I couldn’t have been more surprised if it had said, ‘Surprise!’

A single word dropped into my mind. Fortitude. An unexpected and old fashioned word which I never use. If there is an Angel of Fortitude (and I think there must be) then I may just have been adopted by a little grey 50p stone with a direct line.

So if you suddenly find yourself being semaphored by a pebble, pick it up and say hello. You never know when a stone will turn out to be a friend.

The Beacon’s dark,
the drums are gone,
yet still we rise and beat the earth
with stony fists and say
“Rememberwhen our hearts were full of fire?” 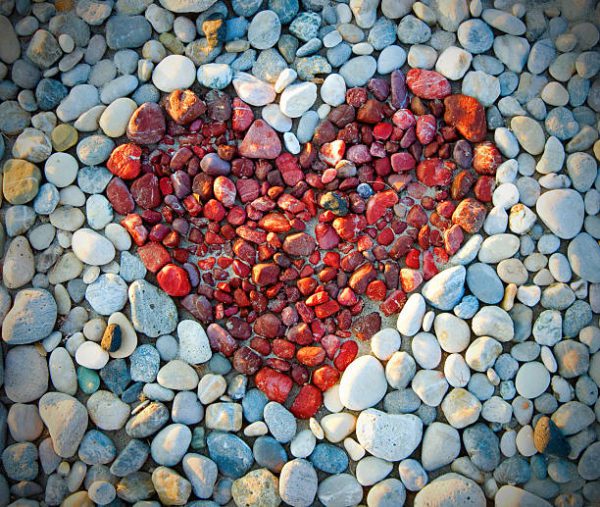