At every summer’s end, the Holly King fought and won a battle with the Oak King for the rulership of the year, and reigned supreme over the dark season… 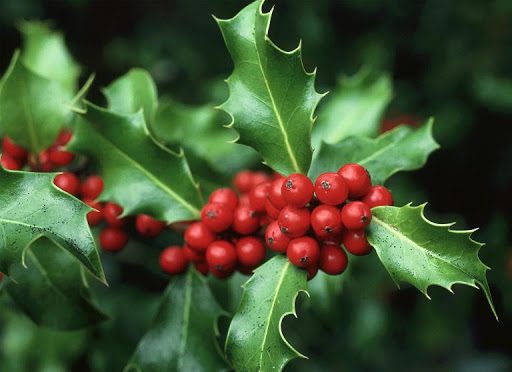 Here comes the holly that is so noble!

At every summer’s end, the Holly King fought and won a battle with the Oak King for the rulership of the year, and reigned supreme over the dark season. At the end of the winter, another battle was fought, this time won by the Oak King, who ruled triumphantly over the summer months. This ancient drama was enacted in the medieval romance of ‘Gawain and the Green Knight,’ where the giant Green Knight enters Arthur’s court at the New Year bearing a great bush of holly as his insignia. He and one of Arthur’s knights, Sir Gawain, whose name means the Hawk of May, engage in a beheading contest. Gawain, who as his name suggests, symbolizes the waxing year, strikes off the head of the Green Knight, but the Knight, who is magically still alive, will do the same to him next time around meaning, no doubt, at summer’s end.

During the dark and barren days of winter, holly has always been prized for its fresh green leaves and bright berries, signifying the green of growth and fertility and the red or blood, a tree of hope and a reminder of the renewal of the springtime to come. The Romans used it in their winter celebrations known as the Saturnalia, and this custom may have spread to England.

Before the Christmas tree came to England in the nineteenth century, a great ball of evergreens and holly berries hung in cottage or hall, decorated with ribbons, paper roses, apples and oranges. Three small dolls, representing Joseph, Mary and the infant Jesus, were arranged in it, often in a manger scene. It was called the kissing ball or kissing bunch, because a sprig of mistletoe hung down from it, inviting a lot of hopeful lurking beneath it!

In Yorkshire, girls carried a holly bush similarly decorated, but without the figures and mistletoe on wassailing ceremonies around the orchards. It was no less common in urban areas. In 15th century London, for example, poles garlanded with holly and ivy were set up alongside Christmas sports.

It was important to bring in the right kind of holly at the right time. In Somerset, holly might not be brought in before Christmas Eve, and then only by a man. Sterile holly was dangerous to man and beast, and on a year when holly had no berries, it was wise to add ivy or box to a wreath or ball for good luck, for the lack or berries could only point to infertility or death.

In some parts of England and Germany, holly trees are referred to as ‘he’ and ‘she’, those with prickly-edged leaves being male, while the smooth-leafed variety signified a female tree. Whichever type was brought in determined whether the man or woman would rule the household in the coming year.

Holly was often paired with ivy, whose black berries symbolized night and darkness. In some regions, holly played the king and ivy his queen as in the old Somerset carol:

And the Holly he is red.
Hang ‘en high in the farm, and us won’t come to no harm Till the Christmas days be told.

Holly and ivy often carry on a kind of debate in poems to determine who rules, as in the medieval poem that begins:

Bright holly usually wins, as in the middle English carol:

Nay! Ivy, nay!
lt shall not be, iwis, (indeed):
Let Holy have the maistry, (mastery)
As the maner is.
Holy stond in the hall
Faire to behold: ivy stond without the dore
She is full sore acold.

And the verses continue to dismiss poor ivy in favour of holly, for, in the words of the familiar carol, still sung today,

Of all the trees that are in the wood,
The holly bears the crown.

After Christmas, the holly still had an important part to play. On Hogmanay in the Scottish Highlands, boys whipped each other with its prickly boughs – for good luck! Each drop of blood drawn from this painful rite meant a year of good health and prosperity. In some places, Christmas holly had to be burned at Twelfth Night or ill-luck would follow. Another old custom ruled that it should stay up until Shrove Tuesday, and yet another, that it must be kept until the following year to protect the house from Lightning. In Scotland, Candlemas Eve (February 1st) was the proper time, before the old festival of Brigid welcomed in the returning light. In Robert Herrick’s carol ‘Candlemas Eve,’ holly is replaced by new greenery:

Down with the rosemary and bays,
Down with the mistletoe;
Instead of holly, now upraise
The greener box, for show.

The foliage was often burned in a ceremonial manner. In the Lake District, an annual procession took place called the ‘Carrying of the Holling or Holly tree’. The tree was lit and was carried aloft through the town, followed by people bearing torches and flaming branches, while others set off rockets and squibs.

Another famous holly procession took place on Boxing Day (St. Stephen’s Day) in parts of Scotland and Ireland. In the ancient ritual known as the ‘Hunting of the Wren’, one or more birds were killed and suspended from a huge holly-bush hung on a pole, which was carried through the town by a group of boys, who would stop at houses to beg for money.

An elaborate burning ritual for winter greenery took place in eighteenth century Kent where the girls had to steal a ‘holly boy’ from the boys who in turn had to steal an ‘ivy girl’ from the girls. Both effigies were burnt in what might be seen as a ritual pyre for the dying monarchs of the old year. A similar battle took place in South Wales on Boxing Day which was known as ‘Holming Day’ where the boys attacked the girls with holly branches, symbolizing no doubt the triumph of the masculine principle of light over the feminine dark.

Its life-affirming colours seem to have made it a popular ritual tree at Easter too, at least in Northumberland. Last century, lads and lasses went into the woods to gather holly on Easter Tuesday, accompanied by the parish clerk who played his violin. They decorated the stone cross with the branches, and then danced. Here it seems to have symbolized the resurrection, but other Christian legends equate the tree with the wood of the crucifix, and claim that from then on it was cursed to grow as a stunted and prickly bush. Like the legends that surround the hawthorn, holly too was supposed to have made Christ’s crown of thorns, and His blood stained the berries red; ‘The Holly and the Ivy’ uses the holly’s white blossom, red berries and bitter bark to demarcate the stages of Jesus’ life. Originally, holly is from Old English ‘hoelrgn’ and from Old Norse,’Hulfr,’ which gave rise to its medieval name, ‘hulver’, used by Chaucer. But the church ‘christianized’ the tree by declaring its name meant ‘holy’.

In most places in the British Isles the burning of the holly meant the death of winter. At spring-time in Scotland, the Cailleach, or Old Hag who presided over the winter months, threw her magic rod or hammer under a holly admitting defeat in the race of the growing light, ‘and that is why no grass grows under holly trees’. 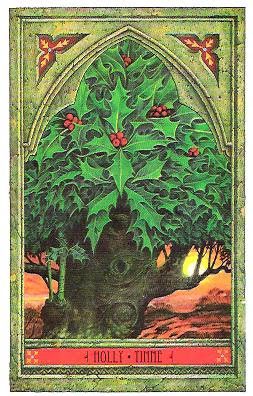 The Druids considered holly sacred and used it in particular at Christmas, for cattle were supposed to thrive if they looked at it on Christmas Day.

Also like rowan. Holly protected against witchcraft. Scottish prisoners brought to Norfolk for draining the Fens stuck holly sprigs around the huts where they slept to keep witches away, probably because they could not find their native Rowan. But English people followed this custom, too. A stout holly stick was a good thing to have when walking home across the Fens on a dark night, and builders made cottage doorsteps of the wood so that witches could not enter. If you see an old holly hedge around a cottage, it may have been deliberately planted for the same reason. It was also used in folk magic for physical illness. In Hampshire, children with whooping cough drank out of a cup made from holly-wood.

An old remedy for worms consisted of placing holly and sage in a bowl of water. When the patient yawned over the bowl, the worm was supposed to fall out into the water. It was also used as a flagellant to cure chilblains.

In the north of England, holly was used for divination by dreams. In one ritual, leaves from a She holly were placed under the pillow for prophetic dreams, or a young girl might place three pails of water in their bedroom and pin three holly leaves at her heart before going to sleep on the eves of Christmas, New Years’ day, Midsummer, or Halloween. She expected to be roused by three yells, ‘as if from the throats of three bears’, succeeded by as many hoarse laughs. When these died away, the form of her future husband appeared, and showed his future attachment to her by changing the position of the water pails. If he did not care for her, the water pails were found unchanged in the morning.

Now Midsummer is past, and the Holly King has won its yearly battle with the Oak King, we welcome this tree with its white blossoms that will before long turn into the familiar red berries that brighten the dark of our year. 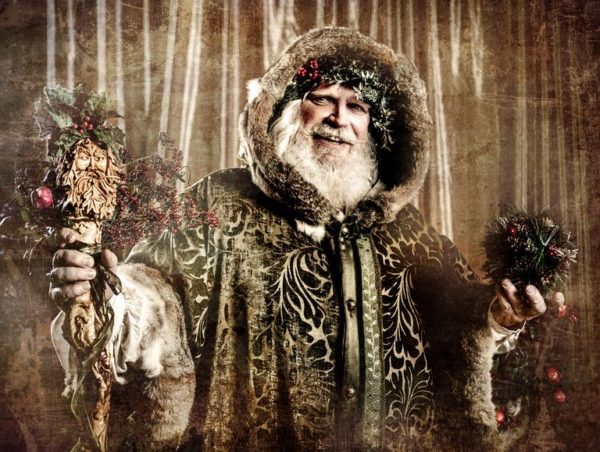