Today our biggest problem is that we have separated ourselves from Nature – so much that there is a risk we may not survive as a species. We need philosophies, spiritualities, ideas, that can help us get back in touch with Nature again – our spirituality must become ecological. Druidry is one such spirituality, and at first sight it might appear to be just an old curiosity, a quaint memory from the distant past. But if we take the time to look at it more closely, we will discover a treasure-chest just waiting to be opened. 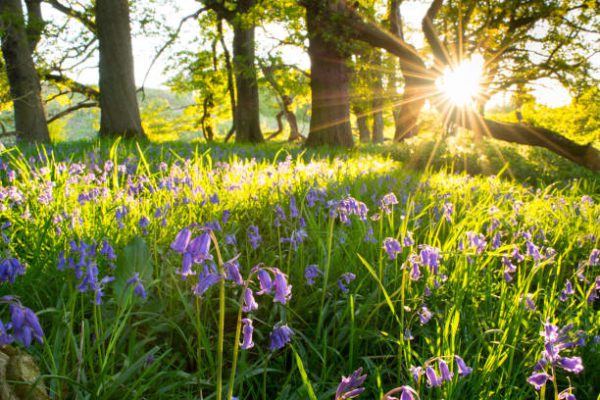 We’d like to invite you to join us in celebrating the tenth anniversary of the Order’s re-forming in 1988.

The exact date of this was 14th February 1988 at Primrose Hill in North-West London, so we’re going to start the year’s celebrations with a party on 14th February 1998, with entertainment provided by many OBOD members, Caitlin Matthews, and by Robin Williamson, co-author with Bob Stewart of Celtic Bards, Celtic Druids. Originally a member of The Incredible String Band, Robin is a modern-day Bard who combines story-telling with song and music. During the evening, Caribbean poets Grace and John Agard (see The Druid Way page 97) will perform their Long Man poems, we will crown the Order’s new Presider, and climb Primrose Hill to look out over the sparkling lights of London and chant the Awen. If you can make it to London, do come! If you don’t know anyone else in the Order, now is the time to change that! There will be food and drink, and I’ll give a very brief talk on how the Order was re-formed.

You may want to celebrate with other members at the Imbolc camp which is being held near Glastonbury from 13th to 16th Feb. Which will include an anniversary ceremony/celebration.

There will also be the opportunity to meet with other members and to participate in an Imbolc ceremony at Stonehenge on 1st February, and, all being well, an Eclipse ceremony on the 26th February.

At Beltane you could come to the annual retreat up on the wonderful windswept island of Iona… spending a week eating delicious food, walking the island, meditating and joining in ritual together with other members from all over the world. Or you could join the Beltane camp in Surrey to camp amongst giant sequoia trees and take part in a magical journey.

Early in June we’ll be holding the Dutch members’ weekend in Holland, and hopefully a weekend in Belgium and France too, to coincide with the publication of The Druid Animal Oracle in French.

In 1988 we held the first summer Solstice celebration of the re-formed Order in Glastonbury. We began with a midnight ceremony and vigil at the Miracles Room, and then moved on to Chalice Well for the Dawn ceremony. This year we’ll be holding an Assembly for each of the three grades of the Order at three different locations in the town: then we’ll all join together to hold a ceremony on the Tor, returning to the town for an Eisteddfod, and vigil for those who want to stay up for the dawn ceremony the following day.

In the past, we’ve held an Assembly just for the Druid grade, but from now on we hope to hold an Assembly like this, which includes all the membership.
I’ll be in America from about 27th June – giving a five-day workshop at the Omega centre in New York state and then going on to the US Summer camp near Buffalo. Wherever you live, if you get a chance to come to this camp, we’d love to see you there! While we’re having our camp, there’ll be a Craftwise event going on too, so there will be plenty of workshops and talks to attend. John and Mary, who organise the camp, have recently bought a wonderful forest site ten minutes from the camp which has its own Bardic, Ovate and Druid groves. We’ll be holding ceremonies and initiations there, and during the week I will give some workshops on the theme of Transformation and Rebirth in the Druid Tradition, and other members will be giving workshops too.

Back in England there will be the Lughnasadh camp near the White Horse of Uffington, and then in September in Australia there will be the Order’s Second Annual Assembly. I have been invited to attend, and will give some talks and workshops, and I look forward to meeting as many members as possible. Then I’ll go on to New Zealand where we have more members. Having gone that far, I may as well keep going – until I get back home via some talks in the USA in October.

During this special year, we plan to publish the selected poems of Nuinn – edited and introduced by Jay Ramsay, illustrated with woodcuts by David Lazarus, all beautifully designed and typeset by Eric Stumbaugh, who produced the Ffrythwau collection.

We are also launching two new projects – both of which will help to make our Druidry more practical and relevant to today’s needs. One project is called 2000 Groves for the Year 2000. As Druids we love trees, and this is a way in which we can help to create a whole network of sacred sites around the world. The project will only succeed if each of us tries our best to plant at least one grove during the next two years. We know that many members won’t have the time, or money, or ability to physically plant a grove, so we’ve tried to come up with as many ways as possible for this goal to be achieved. Clare Prout, who for many years ran the Pagan Hospice and Funeral Trust (now the Voyager Trust) has agreed to coordinate the project and you will find a separate leaflet on this project included with your copy of Touchstone.

So many members of the Order are qualified healers, therapists or doctors or are training in alternative medicine, that the other project we have developed is to build a list of healers, so that they can network together, and so we can create healing retreats that combine a number of therapies within the overall context of Druid spirituality. Again, you will find a leaflet about this in your copy of Touchstone.

When I was asked to become Chief of the Order ten years ago, I thought it would take quite a time to gradually build a membership of a few dozen dedicated students of Druidry. But to my amazement, within a year we had over two hundred members, and since then the Order has grown to become the largest Druid group in the world. Of course, it’s quality not quantity that matters, but nevertheless, the fact that we are such a big group now shows that the Order is answering a real need, and it means that we can undertake projects that would be harder to achieve if we had fewer members.

I hope that over the next ten years we can help to articulate Druidry more and more in a way that really answers to the needs of the Time, and that is both inspiring and practical. Druidry is such a broad, and often subtle subject, that sometimes people are unsure about its relevance and value for us today. Today our biggest problem is that we have separated ourselves from Nature – so much that there is a risk we may not survive as a species. We need philosophies, spiritualities, ideas, that can help us get back in touch with Nature again – our spirituality must become ecological. Druidry is one such spirituality, and at first sight it might appear to be just an old curiosity, a quaint memory from the distant past. But if we take the time to look at it more closely, we will discover a treasure-chest just waiting to be opened. And in this chest we can find seven gifts that Druidry brings to our modern world :

Firstly, it offers a way of looking at the world which emphasises the sacredness of all life, and our part in the great web of creation. It cares passionately about the preservation and protection of the environment, and offers a worldview which is ecological, pantheistic, geocentric, pragmatic, idealistic, spiritual and romantic. It does not separate Spirit and Matter – it offers a sensuous spirituality that celebrates physical life.

Secondly, Druidry offers a way of helping us feel at one again with Nature, our ancestors, our own bodies, and our sense of Spirit, by working in specific ways with plants, trees, animals, stones, ancestral stories, spirits of Place, Gods and Goddesses. It has eight seasonal celebrations, which help us attune to the natural cycle, and help us to structure our lives through the year, and to develop a sense of community, when we celebrate with others.

Thirdly, it offers a way of healing and rejuvenation, using spiritual and physical methods in a holistic way to promote health and longevity. There is tremendous potential for this to be developed more fully in the coming years.

Fourthly, it offers rites of passage: for the blessing and naming of children, for marriage, for death, and for other times of initiation, when it is helpful to ritually and symbolically mark our passage from one state to another.

Fifthly, it offers techniques for exploring other states of consciousness, other realities, the Otherworld. Some of these techniques are also used by other spiritual traditions, and include meditation, visualisation, shamanic journeying, and the use of ceremony, music, chanting and sweat-houses, but they are all grounded in specifically Celtic and Druidic imagery and tradition.

The sixth gift that Druidry offers the contemporary world, is a path of self-development that encourages our creative potential, our psychic and intuitive abilities, and fosters our intellectual and spiritual growth. This is the main focus of the Gwersu [the Order’s teaching material].

The seventh gift of Druidry is the gift of magic – it teaches the art of bringing ideas into manifestation, the art of discovering and then nurturing, and learning how to use, the power of Imbas, of Awen – of spiritual inspiration.

Over the next decade, and beyond, let’s work towards presenting these gifts to the world – and to each other.

Yours by star and stone,