Question: How many surrealists does it take to screw in a lightbulb?
Answer: Two. One to hold the giraffe and the other to fill the bath with brightly coloured machine tools. 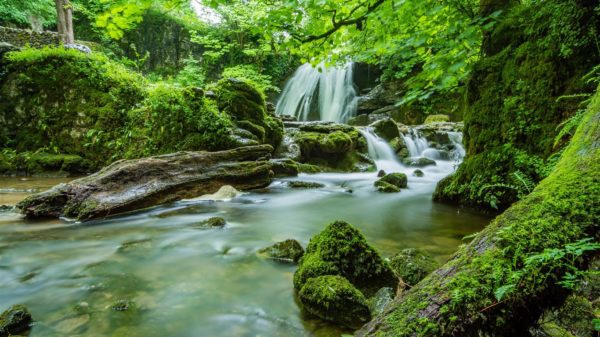 Greetings from a windy hillside where golden leaves are being blown about by a wild wind coming in from the sea over at Newhaven.

Now it is time for a review of the past year of Order activities and of the wider world of Druidry. I always scan through the previous years’ reviews to pick up the thread and to remind myself of how I did it, and to make sure I don’t repeat myself! I had the salutary experience at camp this summer of being told that my somewhat lengthy contribution to a discussion was a verbatim repetition of my previous year’s contribution, so now I am more vigilant than ever. Hence my choice of quote – I know I haven’t used that one before!

The year began with a fantastic Winter Assembly in Glastonbury, when Roland Rotherham and Ardan held us spellbound, and we finished the day feasting and dancing. Through the year there seemed to be more events on offer than ever before, so I may well have left some out in the following list.

The Tircoch cottage wild weekends continued to entrance newcomers and old hands alike. Damh and Cerri flew to Italy to represent OBOD in a Celtic festival, and then Cerri was off again to help lead the Dutch members’ weekend. I helped to lead our first Naturist retreat which threatened to take place in the pouring rain. The weather changed on the first day and a hardy group of us spent our days together swimming and sunbathing and being massaged by Helen, our aromatherapist friend. Ronald gave a brilliant talk entitled ‘A Modest Look at Ritual Nudity’ to the Spielplatz community in the clubhouse, and Gordon persuaded us all of the value of posing as Greek gods and goddesses in 1930’s tableaux. I rarely interfere in Penny’s editorial decisions, but I have refused to allow photos of this event to appear in the pages of this hallowed organ. (For US or foreign readers – this is an old fashioned and pompous term for a journal. The obvious double-entendre is often used by a famous satirical magazine here – ‘Private Eye’). So sorry, folks, no photos of us all camping about with veils of silk or nothing at all!

In the Spring Kate and Barry held a highly successful weekend at the Caer centre in Cornwall, and Susan continued her presentations of workshops designed to enhance the course material. Ardan held two Bardic workshops in Lewes, which amazed us all in their ability to inspire us and evoke our creativity.

The Beltane and Lughnasadh camps were simply the best ever, with stunning food at Lammas thanks to Yamouna and her team, and our most ambitious Wide-Game ever: a re-enactment of Part I of Lord of the Rings! In fact we have to change the term ‘Wide-Game’ – we need to start calling them ‘Extravaganzas’ or something equally extravagant. For those who have never been in one, we take a myth or story and then enter into it – creating a journey and a ‘game’ or experience that has some sort of climax or culmination. I can’t even begin to describe the Lord of the Rings game – it would take pages, but let me just give you one image: Ivan painted red all over, completely naked save for a ram’s skull which with cunning skill he had turned into a pair of underpants (ouch!), carrying a horse-whip and a paint-stripping gun out of which belched great balls of fire. You’ve guessed it – he was the Balrog. And opposite him was Damh as Gandalf, wearing a grey cloak and cape, with a beard made of what looked like coloured spaghetti (which was in fact wool). It was an uneven contest and after some staff-fighting, Gandalf was dragged screaming into the mines of Moria.

As always the camps were a fantastic example of the OBOD spirit – with dozens of members and friends and visiting speakers contributing their energy, time and creativity to produce fabulous events, seamlessly coordinated by Clare and the camp team of crew and circle who take care of the logistics.

A similar dedication and team-work in the Order has started to bear fruit in a completely different arena – those teams of German, Dutch and French translators who have been working for a year or more, are finally about to see the fruit of their labours as the German edition of the course is published this month, with the Dutch version appearing in January, followed by the French edition in the Spring. As with the camps, I’d love to list everyone’s names and thank them individually and publicly in this way, but there are so many people involved in these projects this just isn’t practical. Instead it seems only feasible to mention those who coordinate projects, but this doesn’t mean that each individual contribution isn’t deeply appreciated and important. Jurre and Agnes in Holland are coordinating the ‘European office’, which involves the massive task of typesetting, printing, storing and distributing the foreign-language editions. Each language now has its website, and translations into Portuguese and Czech are also under way.

Events in Europe included for the first time a retreat in the magical forest of Broceliande, in Brittany. It was such a success that it will be repeated again next year, and having participated in it, I can say that it was a fantastic experience. Certain places on this earth seem to have a special power, and Broceliande is one of these places. Our walks in the forest, visits to castles and the grail chapel, concerts and leisurely meals under the trees were all made even more enjoyable by the constant supply of Chou-Chene – distributed at every opportunity by our French Druid companions. (Chou-Chene is a Breton type of mead). Many of the participants were harpists, taught in master-classes by Myrdhin, Zil and Brigitte. And now there are so many harpists in the Order that they have formed an internet community.

Having written this last sentence, I have just learnt that an Order member, the supremely talented and versatile harpist Derek Bell of the Chieftains, has just died after an operation in the US, at the age of 67. Dear Derek, may your journey to the Summerlands be swift and sure. You will be sorely missed, but the legacy of your music will live on!

In addition to a Harpers group, you can now find groups for members who live in the Pacific, Holland & Belgium, and Germany, and internet communities specifically for Ovates and Druids, as well as plenty open to all grades. For details see the NOBOD website at http://druidry.com/nobod.

Another team working behind the scenes is devoting itself to creating course materials for visually challenged and dyslexic members, arising out of Lynn’s ‘Seeing with Eyes Closed’ initiative. There are possibilities for creating Braille versions of the Gwersu, and a recording project is being set up to record the course, complete with musical accompaniment and the voices of members around the globe. If you would like to participate either with your voice or with your technical expertise or equipment (such as DAT recorders/studios) please contact Karen Ehrenfeldt at kme@xs.com.

The Druid Healing College continues to develop, and a new service is being coordinated by Dutch members and is available in both Dutch and English. It aims to offer a whole range of information on health issues. Do have a look at it: www.healthydruid.info and anyone interested in health and healing should look at the Healing College section on the website too – membership is free and you don’t have to be a healer to join.

Another dot-info has also arrived: our indefatigable and now proud-new-father Matt McCabe has started www.druidry.info – filled with just what it’s title suggests – info about Druidry.

In the States, AncientDruid who ably coordinates the Sacred Grove project helped to bring US members together at a camp in Pennsylvania, and it sounded fabulous. Let’s hope there are more events in the US next year. And of course groups of members are gathering together in groves or seedgroups all over the place. My favourite announcement for one of these groups appeared in October’s Touchstone: Beneath the contact phone no.it states:

This year saw our Modron, Cairisthea, retiring after a decade of outstanding contributions to the Order and Druidry, and the Archbishop of Canterbury to-be becoming a Druid. There’s no connection between these two events as far as I’m aware, but life is so odd anything is possible!

The Druid Forum in Stourbridge organised by the BDO was a great success, and last month’s issue covered it in detail. Earlier in the year a number of members were present or spoke at the Dragon Environmental Conference in London, and next month Philip Shallcrass & Bobcat of the BDO and I will be giving talks at the Witchfest, and then attending the Pagan Federation’s conference a fortnight later.

Finally – books! Rather in the way a parent who has produced triplets might feel alternately proud and rather embarrassed by their progeny, this year has seen three books of mine on Druidry appear: the first a brief biography of Nuinn followed by edited excerpts from his writings, entitled In the Grove of the Druids. then Druidcraft which looks at the territory shared by Druidry and Wicca, and now this month Druid Mysteries has been published, which is a complete re-working of The Elements of the Druid Tradition, complete with new chapters, a glossary and updated resource guide. I wish I could promise not to produce any more, but the publishers of the Druid Animal Oracle have asked Stephanie and I to produce a tarot deck and book, with the images being beautifully and quite stunningly painted by Bill Worthington – an example of one of the cards is on this month’s cover. The complete set won’t be available until 2004. Julie White’s fascinating The Path through the Forest has just been published by Druid publishing house Grey House in the Woods Press, and I’m looking forward to reading it. Another publishing house, run by OBOD member Matthew Scott in Canada, (Wellman Books) has produced an extraordinary book by member Vivienne Manouge, Faeries of the Wild, Wild Moon, and all these books (and more) can be bought online through our new secure-ordering bookshop which is being created as I write.

In addition, a new issue of the best Druid magazine in the world, The Druid’s Voice, produced by Philip Shallcrass, has appeared once more this year, and Caitlin and John Matthews are putting the finishing touches to new books, and revised editions of earlier works, that we will announce as they appear.

Wow! What a year!

I hope the following months bring you much Peace and Joy. May the World also find Peace amidst its troubles, and may each of us feel clear and strong in our hearts and souls.

Yours in the Peace of the Grove,
Philip /|\