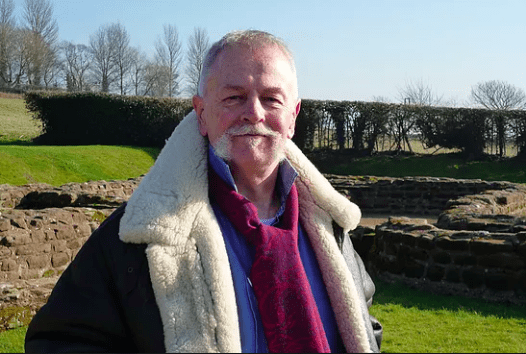 He is a member of the Institute of Heraldic and Genealogical Studies, and The Fellowship Of The Knights Of The Round Table Of King Arthur.

Referred to as ‘The Doctor’ by his colleagues, and ‘Roly’ by his friends, he has been described as ‘the quintessential Englishman’ and has devoted his life to the study of Arthurian and Grail Lore with frequent forays into the world of associated legends and mythology.

In this section of the website we invite you to sit back and imagine that you are by the fireside with Roly, while you listen to a series of three talks – on Arthur, the Grail and the Spear – and read their accompanying essays. On each page you will find the audio talks button beneath the essays. You can Pause, Rewind and Fast Forward by moving your cursor over the small circle.

Throughout the ages many legends have grown around many heroes, some of these fascinating people can clearly be categorised as ‘Myth’, in other words they are stories without a basis in fact but every now and again one hero emerges in that which we can call ‘Legend’, that is to say a story that has been based on a factual person or events in history.

Aspects of the Grail

What is The Grail? What are its origins? Is it the cup of the Last Supper, or does it have older Pagan roots? In the following essay and accompanying audio lecture given by Professor Roland Rotherham you will be taken from the room of the Last Supper, to the mount of the crucifixion, and back further in time and into the underworld of Annwn.

Elements of the Spear

Roland Rotherham explores the history of the Spear associated with the Grail legends. Is it a holy relic, a simple historical museum exhibit, or does it have a more mysterious history and legacy?