Of Redwoods and Renewal

Nature often offers metaphors more elegant than any we can manufacture, and Muir Woods is no exception. Redwoods have evolved to turn disaster into opportunity. In these coastal forests, death produces life…

Of Redwoods and Renewal 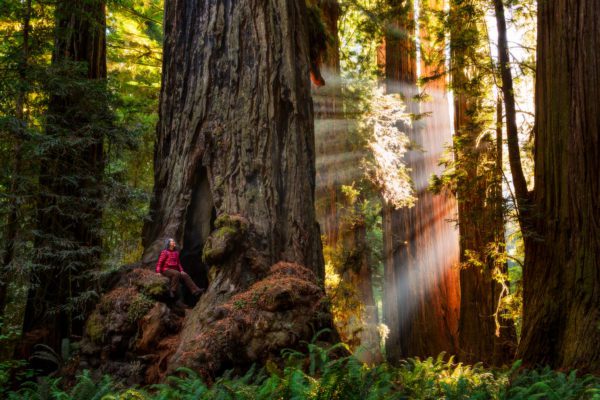 Nature often offers metaphors more elegant than any we can manufacture, and Muir Woods is no exception. Redwoods have evolved to turn disaster into opportunity. In these coastal forests, death produces life.
~ Hope Edelman ~ Motherless Daughters

Along the roadside of the ornamental Rhinefield Drive in the New Forest is the ‘Tall Trees Trail’. Here you can wander through the vast Douglas firs. Unlike the majority of their kind who – betrayed by the profitable straightness of their trunks – are felled long before their time, these trees have been left to discover their true height. In the midst of English oak and beech has sprung up a little of the prehistoric, incongruously placed just feet away from passing cars. It is difficult not to be deeply moved by these beautiful trees; they stir a dimly felt primal memory of ancient forests, evoking feelings of both familiarity and strangeness.

Further along the trail is a grassy ride that ventures deeper into the woodland. A little way in from the road, standing like giant sentinels on either side of the track, are two redwoods. They are the tallest trees in the Forest and yet are still very young. Unlike the deep rutted thickness of the Douglas fir, the bark of the redwood is delicate. Such a thin skin belies the tree’s strength, and hidden beneath its papery exterior, its own unique powers of reproduction reside:

In the redwood ecosystem, buds for future trees are contained in pods called burls, tough brown knobs that cling to the bark of the mother tree. When the mother tree is logged, blown over, or destroyed by fire –when, in other words, she dies – the trauma stimulates the burls growth hormones. The seeds release and trees sprout around her, creating the circle of daughters. The daughter trees grow by absorbing the sunlight their mother cedes to them when she dies. And they get the moisture and nutrients their need from their mother’s root system, which remains intact underground even after her leaves die. Although the daughters exist independently of their mother above ground, they continue to draw sustenance from her underneath. 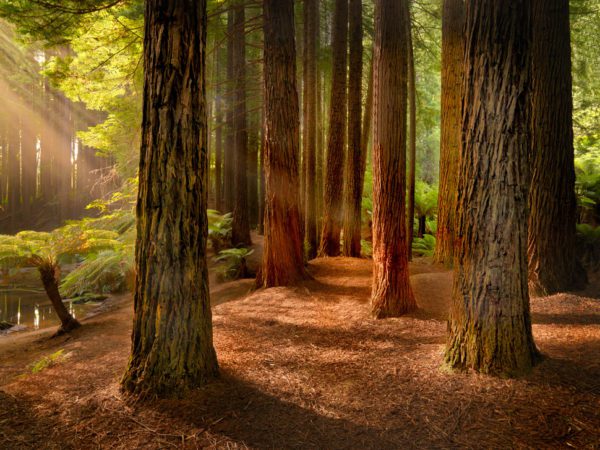 The above quote is taken from Hope Edelman’s book Motherless Daughters. In it she deals with childhood bereavement, specifically daughters who lose mothers. Edelman, whilst out walking, had come across a charred stump of redwood surrounded by a circle of young trees. She discovered that park rangers call these groupings the ‘family circle’. For Edelman, who lost her own mother as a teenager, the invisible but strongly felt presence of her mother’s life and death had led her to conclude that ‘Her presence influenced who I was, and her absence influences who I am. Our lives are shaped as much by those who leave us as they are by those who stay.’

When I first discovered the New Forest trees, my thoughts were drawn to Edelman’s redwood metaphor. My own mother died when I was thirteen; that charred stump of redwood surrounded by her offspring struck me as a poignant and touching image. That invisible root system that entwines the lives of our psyches with that of a mother lost, can trigger a long journey, one that can be a taut struggle between wanting to hold on and wanting to let go; an inner battle to find a sense of one’s own autonomy and destiny, one that isn’t only linked to that original, momentous loss. Seeing those enormous redwoods and firs, given the space and freedom to become their true shape and size, stirred a great deal in me. And yet seeds grow where they fall, so many factors aiding or impeding that growth. We are one in a long line of mothers and daughters, fathers and sons, the bonds of which (or lack of) will shape our own experiences in ways we may only be partially conscious of, if at all. 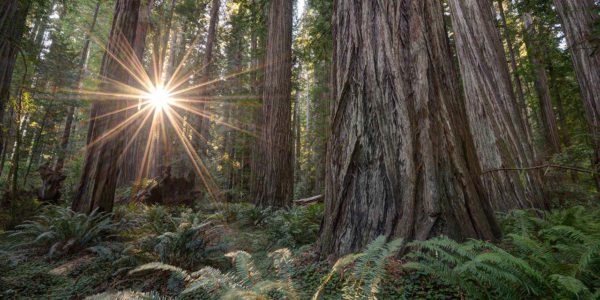 It didn’t surprise me to learn that mother loss had been a common theme in my family. My great grandmother Lydia had abandoned her seven children, never to return; my great aunt Rose died at 104 still refusing to speak of her mother, the hurt and betrayal of that loss undiminished after almost a century. My grandmother and her siblings went on to lose their step mother in child birth too. After the loss of two mothers, my grandmother became pregnant whilst in service and was forced to give up her own child to adoption. My own immediate family struggled to recover from my mother’s death. My sister’s early and tragic passing has left a legacy of loss for her children too. When I began to look at my family history, it was hard not to feel a part of an ongoing collective striving; unresolved loss from the past was attempting, by repeated patterns, to find its peace in the present, and if not then, through lives yet to come.

Families seem to have their own collective themes and challenges. As each of us are born and live, perhaps we are presented with opportunities to redeem the pain of the past, not just for ourselves but for all those who have gone before us and those that will follow. Our collective family narratives are powerful, and each of us is subject to their influence, to a greater or lesser extent. For some, being caught up in the unfolding patterns of an ongoing family dynamic can be confusing and deeply wounding, but I have come to believe that there is always the potential for healing, even at the heart of the most entrenched familial patterns. There is a fine balance struck, knowing that you are part of a group narrative that will have profound effects on your life and acknowledging that you are also an individual with your own life to lead. In honouring our own path, by finding our true shape and height, we can reweave the patterns; inject new life and perspective into our family story. It would seem that we are both forest and tree.

Nestled into the vast trunk of one of the New Forest redwoods, the span of my life seems remarkably short, as seemingly insubstantial as the fibrous red bark that I rest against, and yet this tree feels so solid, so strong…It has the power to bring forth new life from its own death. Below the surface of our lives, deep beneath our singular and collective skins, those tough little burls await their moment; out of the deepest sadness and loss they come to life. 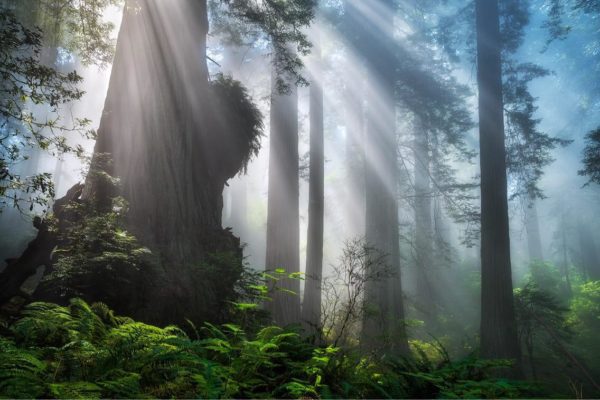